The INVISIBLE FARMER meets LOUIE THE KING OF FRENCH BULLDOGS! 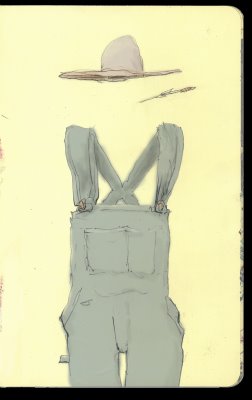 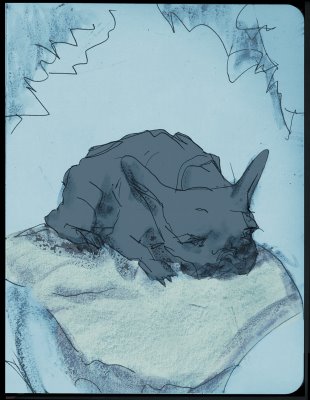 The farmer's green overalls are not only a tribute to St. Patty's Day, but also to Mr. Greenjeans of Captain Kangaroo fame.

My favorite part of which was the magic drawing board. I still want one SOOOOO Much!

But what was it that the Moose used to get the Captain to say in order for all those ping pong balls to fall down? I'd laugh til milk came out my nose.

Louie is in blue not out of ennui, but to pay tribute to St. Andrews day, as Scots are the best Kelts. Which rhymes w/ kilts afterall.
Posted by MrGoodson2 at 10:34 AM

Great whimsy on GreenJeans. That guy that played Greenjeans would have been right at home in film noir. Pulling a sap out of his baggy pockets to let some private snoop have it. And of course an invisble Greejeans might explain that shiver that Bunny Rabbit would do on occasion. I may get a French BullDog when the cat dies. Dig the drawing.

Mr. Moose used to ask the Captain various knock-knock jokes with the punchline being the cue to drop the ping pong balls, such as:

Knock-knock.
Who's there?
Candy?
Candy who?
Candy ping-pong balls be held back this time?

Charming stuff... and always a pleasure to see Louie!

Special thanks go out to Tom who solved the moose riddle issue that's been plaguing me for years!

Ellis, I can't recommend the breed enough. They are expensive, but there's also rescue society websites, which is where we got Louie. Now we have two others, one from a breeder in Rancho Bernardo and the puppy was imported from Russia.

But they're pretty quiet as a breed, couch potatoes most of the time, and just plain hilarious.