...For my pal Carlo. His site CG Circuit is a great resource--and a great place to post an online class of your own. It can seriously make you a few extra dollars. 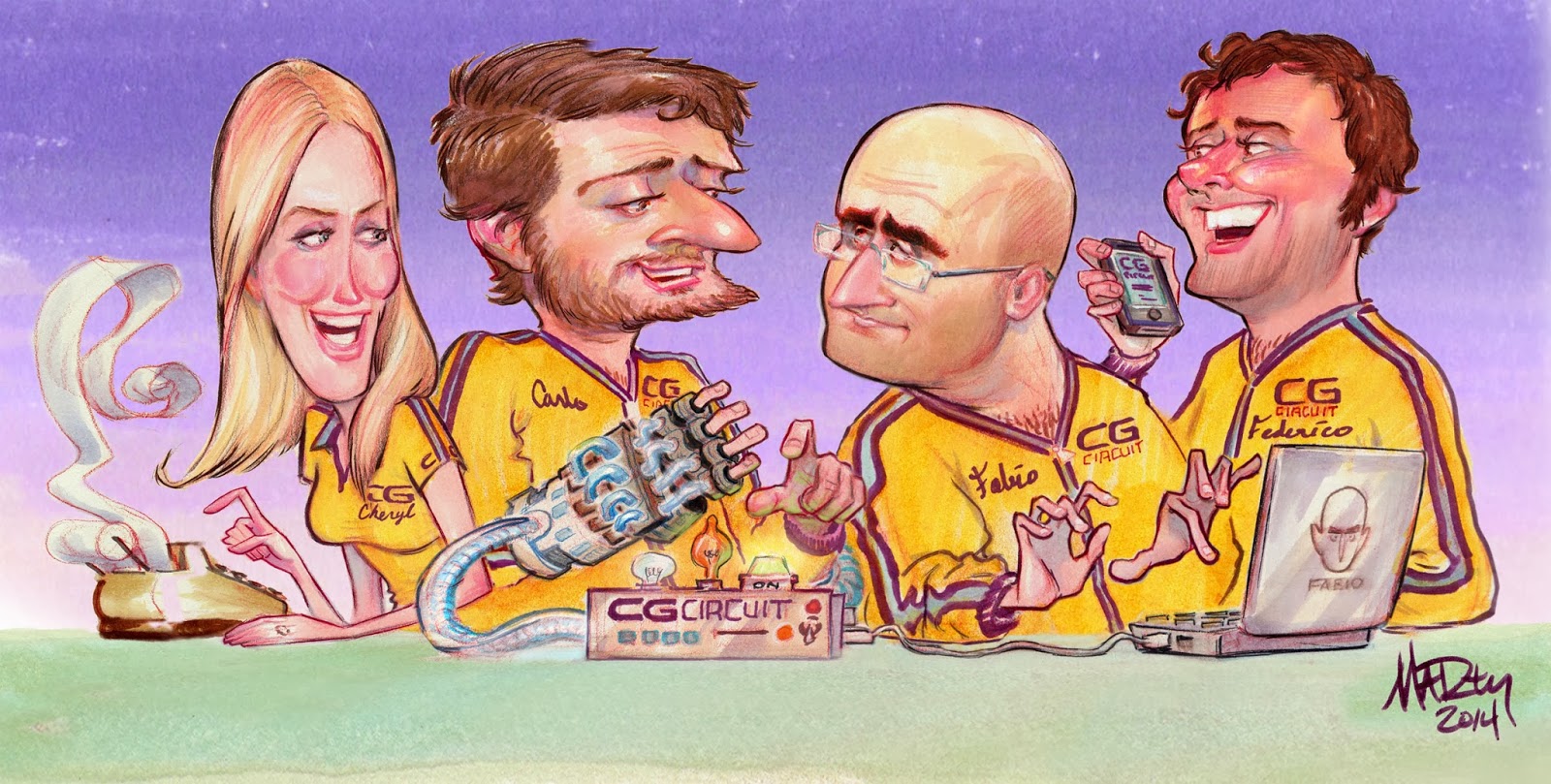 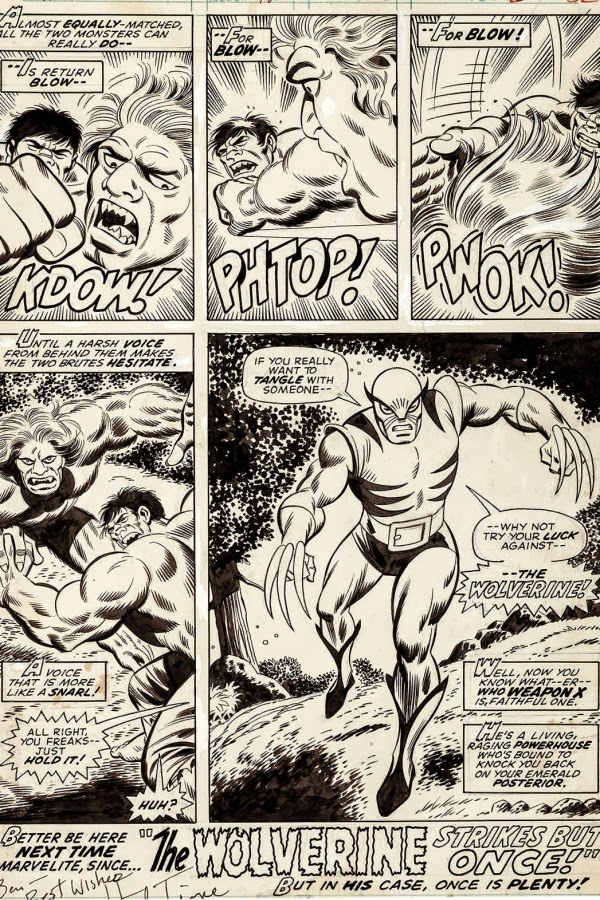 I got sucked into doing this... 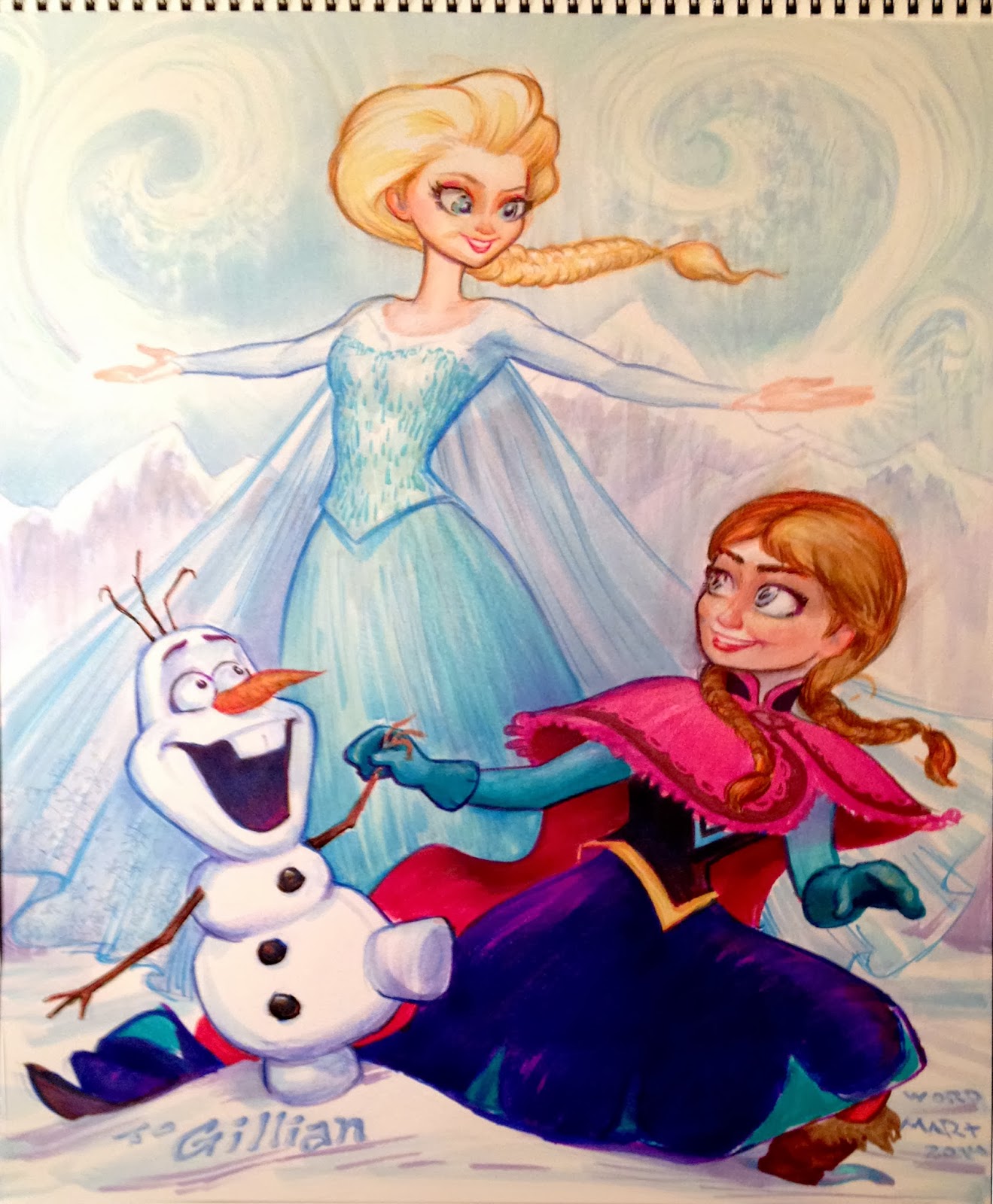 It's wonky b'cuz of the askew photo angle...among other things, he says defensively.


JMG: Marty, I have one thing to say about this illo

better do a decent drawing soon.
Something with a few hours in it.
Like Marty.
Posted by MrGoodson2 at 3:40 PM 5 comments: 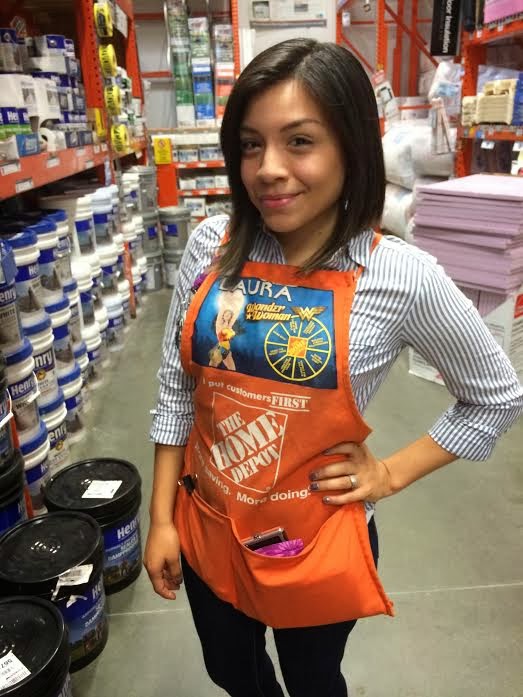 A request was made to see a Tom Carroll apron on a real Home Depot associate, so here goes. Laura is the Department Head of my store's flooring dept. She graciously allowed me to photograph her in her Wonder Woman themed apron. You can see that I dropped out a couple of typographical layers on the design I included on an earlier post: my bad. Laura's next request: Captain America and Wonder Woman sharing the apron space ... should have time to design that one sometime this week.
Posted by MrGoodson2 at 1:31 AM 13 comments: 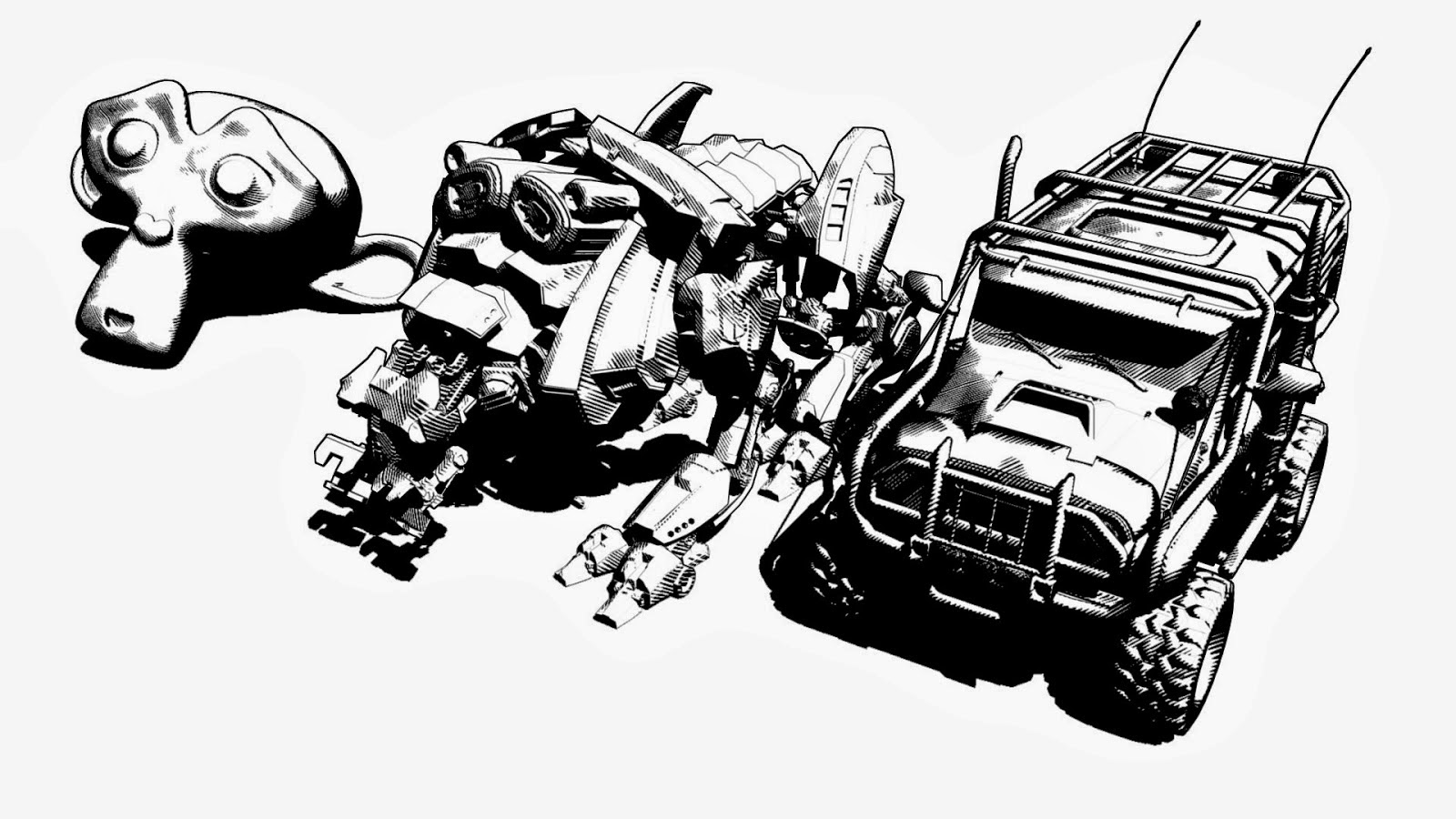 Haven't not posted here in ages. Sorry about that. Of interest, I think:

Ink Shader for Blender
Posted by MrGoodson2 at 1:52 PM 7 comments: 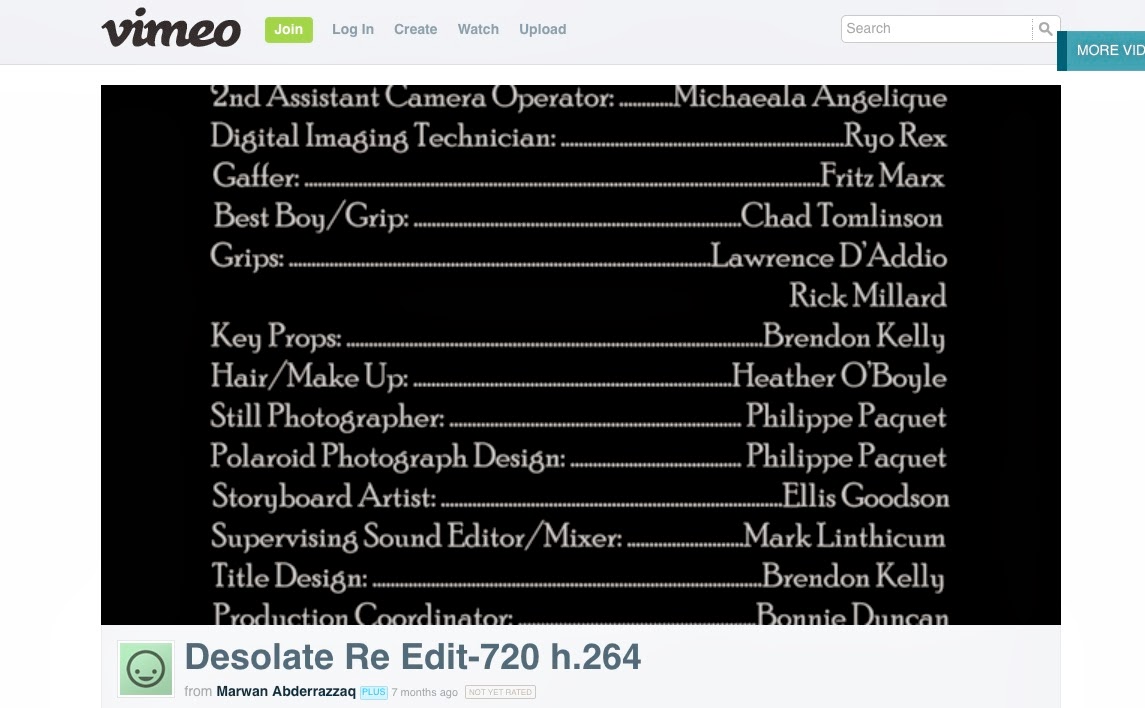 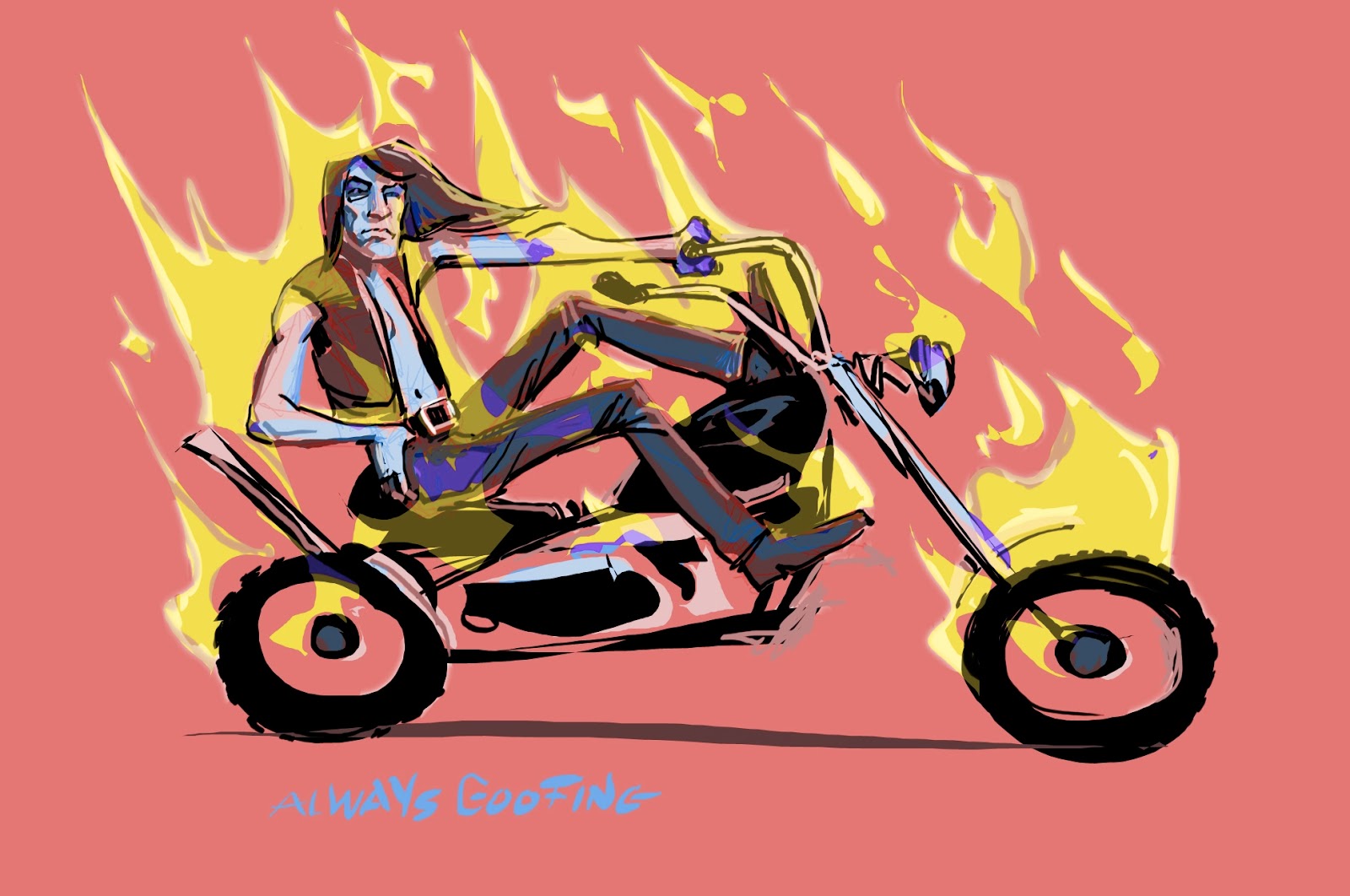 The credit is from the horror short I storyboarded. It has won Shriek Fest in the short category. I posted that news earlier. I've seen it now. Came out great. It's top secret until he gets all the festival runs and the DVD deal worked out. So I can't share it. But it's sweet.
Very low budget but genius shoot arounds and use of limitations.
And good acting. Very pretty actress and the guy is doing a great chauvinist, type A, guy from MadMen early 60s.
The biker thing I did on the cintiq last night.
Came about because Frenden, the fellow who reviews all the drawing monitors, did a drawing where he was complaining about how hard it is to draw a motorcycle. But that he wanted to draw Ghost Rider. And his biggest client is Harley Davidson. And, to wrap up, he didn't do too great a job on the drawing. So I thought, I think I'll draw a bike and a biker.
Using selection tools for a lot of the drawing.
Posted by MrGoodson2 at 9:31 AM 6 comments:

Fun little flick.
A lot more fun than the mess I created on the cintiq
I'll probably buy it after a couple more checks.
Posted by MrGoodson2 at 11:41 PM 32 comments:

Another panel from my upcoming opus, "Chubby Cheekers." 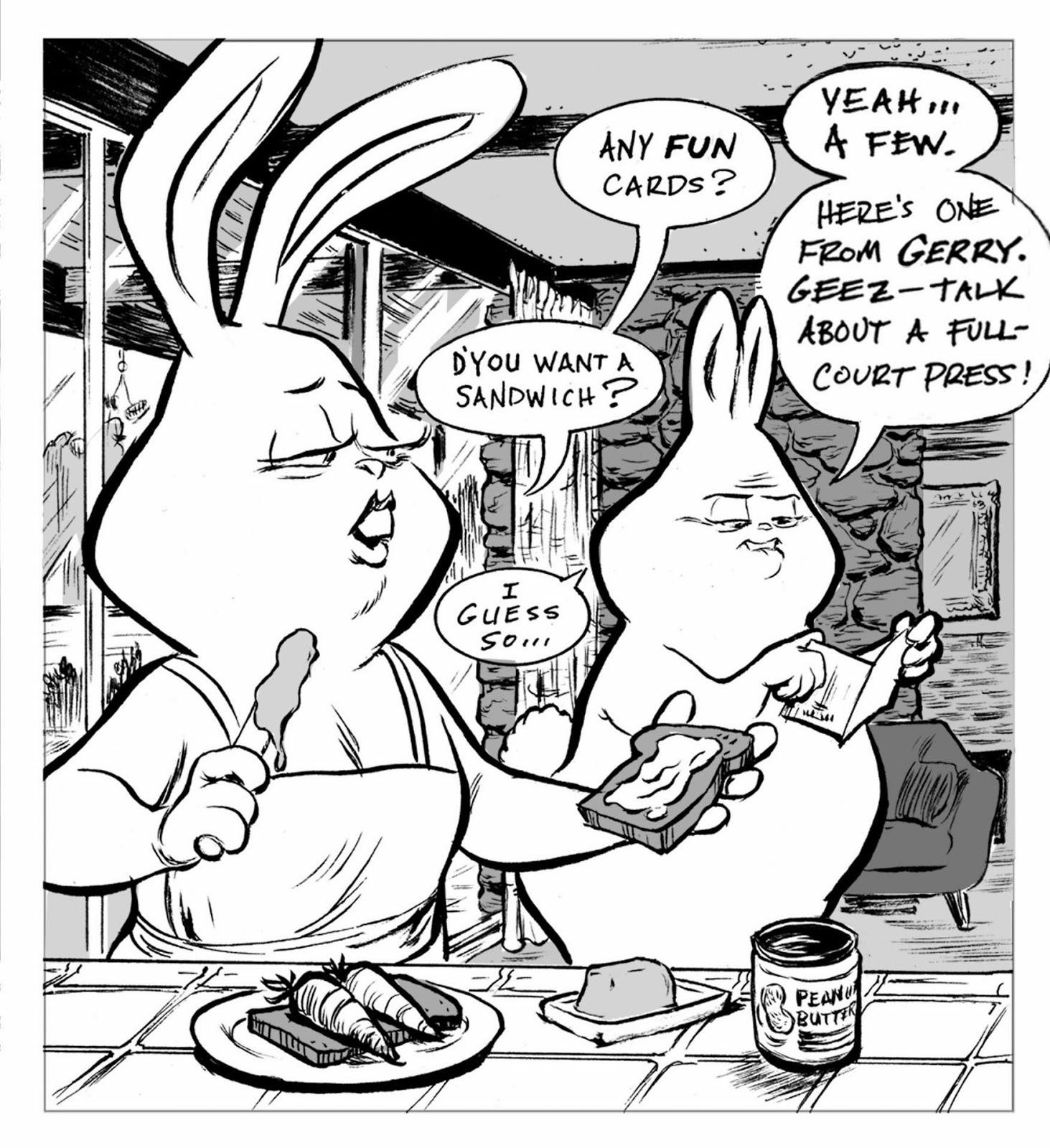 May The Flush Be With You! 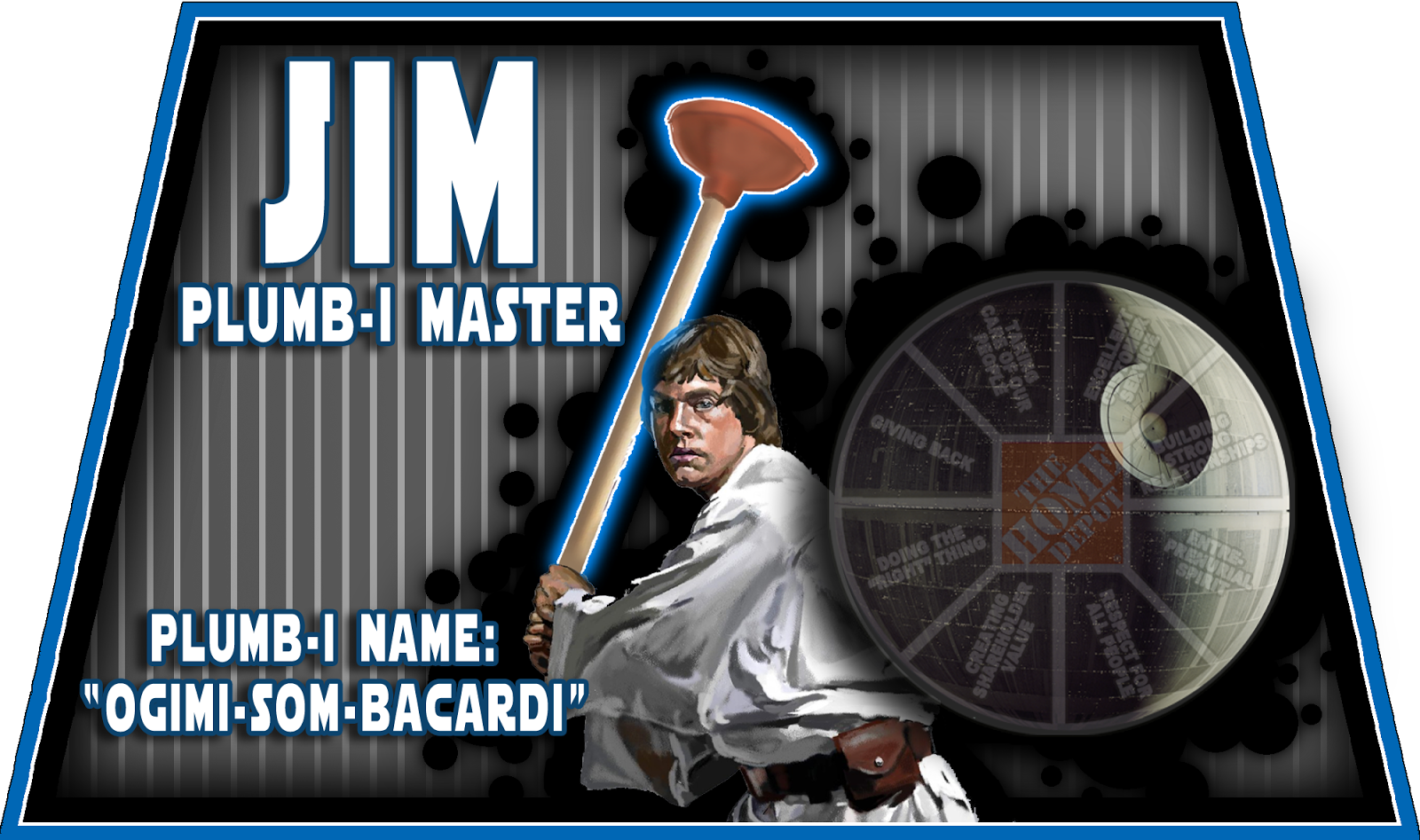 This apron design was for a plumbing workshop I organized a week ago. Jim, the associate doing the workshop, brought along an R2D2 model his son had given him and had it on the side table with a roll of T.P. on its top antenna. The workshop was on how to install a toilet and Jim had a banner behind his display that read, "May the flush be with you." Jim loved this apron design (he had the original idea for it, but minus Luke and the plunger ...). I made mini-posters of it; there was a word balloon pointing to Luke saying, "Darth Vader isn't the only thing that stinks around here!"

To answer Tom's question on the previous post, women were the first and strongest early adopters of cool apron art, but the men are now catching on in greater numbers.
Posted by MrGoodson2 at 1:00 AM 5 comments: Without going into things too much, I can't just "work" at a place, especially at a retail establishment like Home Depot. So, after getting there I looked at the aprons and how people either wrote their names using Sharpie or had someone hand letter a name on their apron. Not for me, so I began experimenting with how to use T-shirt transfers to add some pizzazz to the process. What you see are some of the more fun designs I have done. About 1/4 of our store now uses something I do, and I'm also called on to design specialty aprons for walk-throughs or special events. At first the top dogs didn't understand the designs, that is, that they retain the Home Depot "Value Wheel" but also give a real flavor for what drives the individual associate. Now, things have changed. My store pays for my ink and transfers and associates pay a fee per design (which goes to the Employee Fund).

Joe (and Marty) Go To The Opera

Sketched this Wednesday night at San Diego Opera's rehearsal for "The Elixir of Love." Notice the Joe in the corner!

Lots o' fun, tho' I struggled a bit. Stuck to pencil for the most part...but still had a great time. I'll post the link to our full set of drawings when I get it. Saw Eric Shannower and even that shameless hussy, Scott Benefiel. 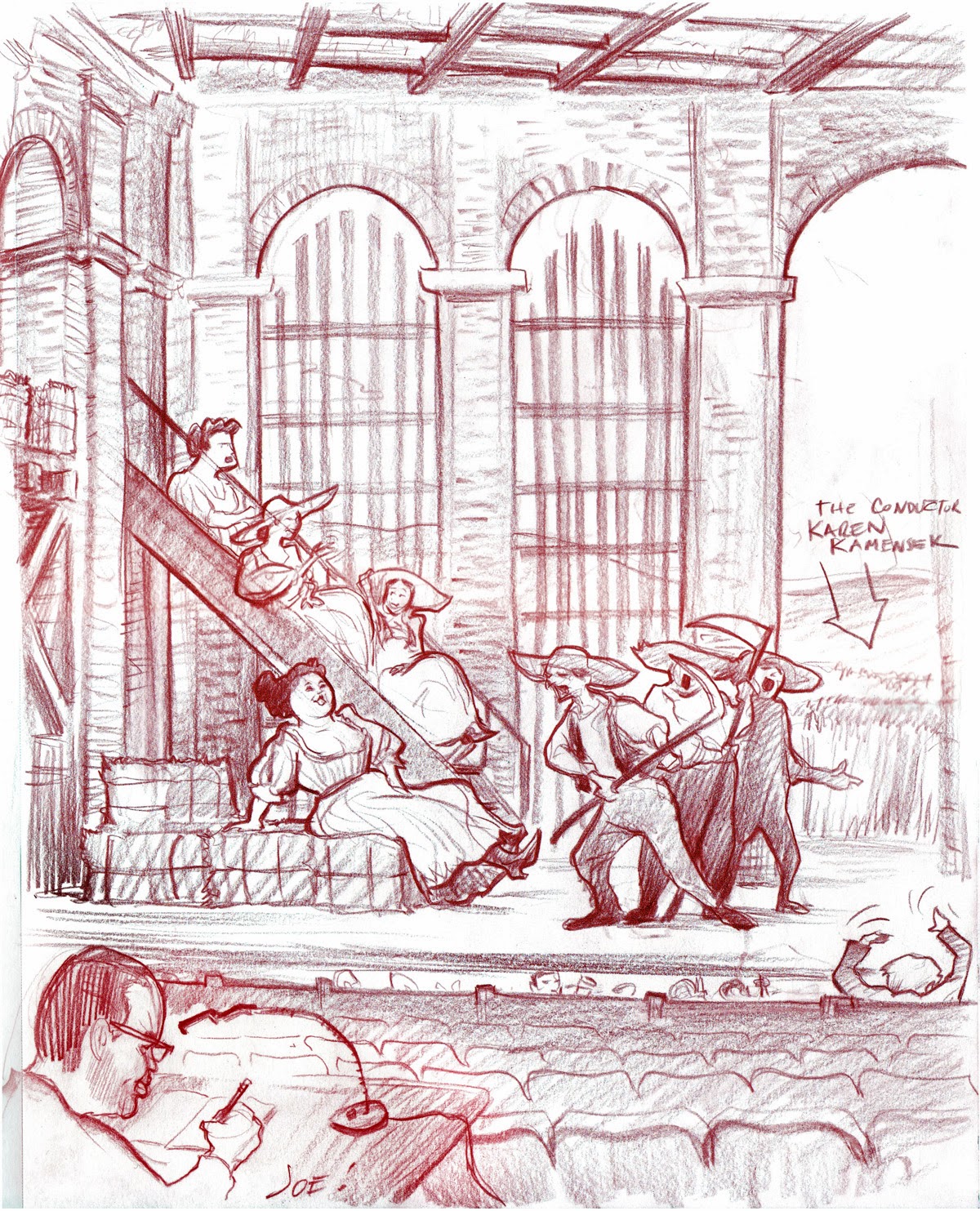 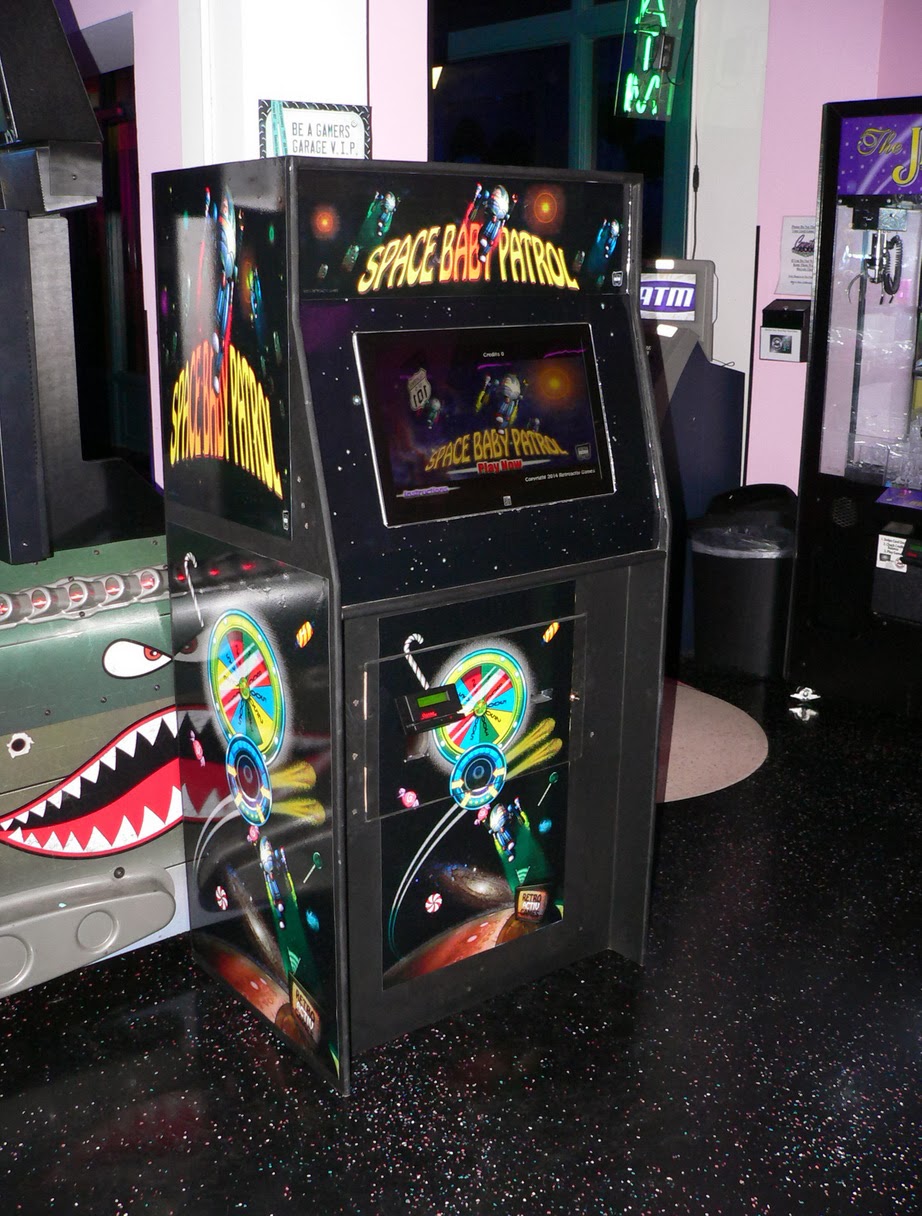 Seen above is the Space Baby Patrol game that is in a cabinet built in Mexico. Jeff Remmer did the original art for the game and I cobbled together the cabinet graphics from some of his renders. David Dentt and Steve Hostetler (BlueSky alums will remember Dave and Steve) did the programming and engine respectively. The game is on test right now at the Corvette Diner by Liberty Station in San Diego and is doing well (about $100 a day). We'll take it to a show in Vegas in March after having a new cabinet built that doesn't look like it was brought forward from some '80s arcade. The second game we made, Candy Popper!!, is being prototyped by a company in Utah, but they've run into interface board programming problems and that game probably won't be at the show.  More about it when it becomes "real."

Personally, I do work with RetroActiv Games (see above), teach Portfolio II one day a week at the Art Institute of Calif., San Diego in Mission Valley, San Diego, and now work full time as a hardware guy, clinics captain, and apron designer at the North Oceanside Home Depot (#1018, off of Highway 76 at Melrose Ave.). Unlike Ellis (who I completely understand), I don't mind the customer service stuff in retail and treat it like a game. I also like putting on the clinics for the store and have made a real role for myself doing apron art, mostly with borrowed images from the internet. I'll show a few of the better ones I have done in another blog post...

My hope is that the arcade games take off, but because of the state of the economy I don't anticipate quitting any day jobs anytime soon!!!
Posted by MrGoodson2 at 5:32 PM 2 comments: 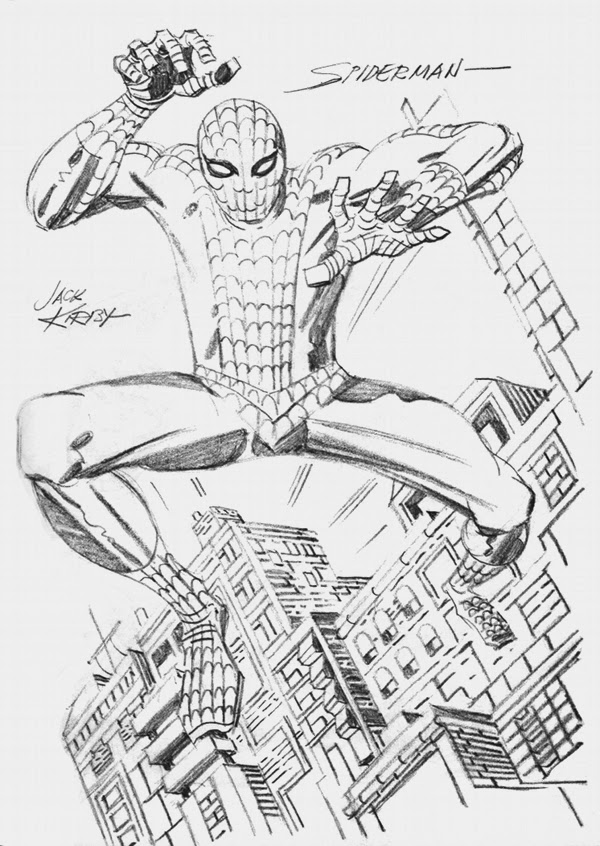 I don't know if Kirby could have pulled off Spiderman given a little time. But you can really see this as a style that didn't match up well.
It made me think about Kirby and lithe characters.
Didn't do a lot of them did he? This took about 8 hours.
Selling it for an agreed 150 bucks.
Twice what I'll make as a maintenance engineer tomorrow.
So can't complain.
Man-I hate to work big-11by17
Kirby would have done it in 2 hours.
Posted by MrGoodson2 at 11:44 AM 9 comments: I was sitting in the break room last night, didn't have anything but hotel courtesy note pads and courtesy ballpoints.
Some ballpoints (the cheap ones) build up like pencils.
Gregory Ecklund at Heavy Iron used to use ballpoints for all his sketching.
Posted by MrGoodson2 at 10:17 AM 3 comments: 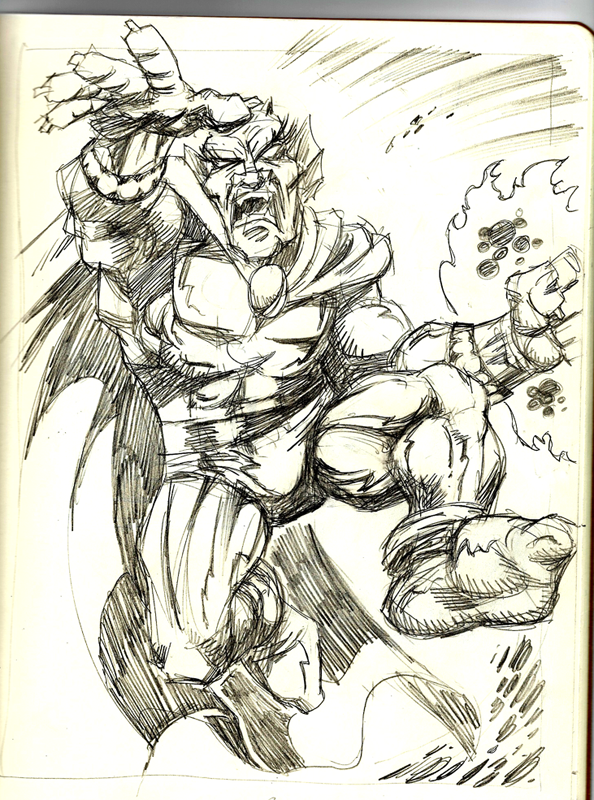 This is the only Kirby-inspired drawing I have handy.  In other news, I've completed all 32 pages of the first issue of my comic.  I need to do a cover and a polish pass on the comic (and get it proofread!).
BTW, this drawing was done after I read a collection of Demon comics a few years ago.  What a crazy, trippy series of comics THAT is! 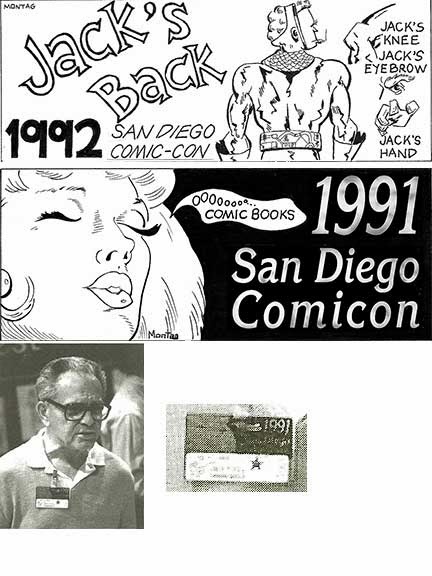 I logged on to lament my being laid off yet again and to check up on Ellis when I saw the Kirby posts. Here is a badge I did for the Con way back when you could get in free if they picked your badge. The second badge design is being worn by Jack himself at the convention. The photo is from the Kirby Collector Volume 1, Issue 1.
Posted by MrGoodson2 at 7:28 PM 7 comments:

Saw the Kirby anniversary yesterday...prompted me to look at some Inhumans images on tumblr today. I started doodling a little tribute and wandered onto this...I started laughing so much I had to see it through.

Why is it always so much easier to sketch a lark than "serious work"? 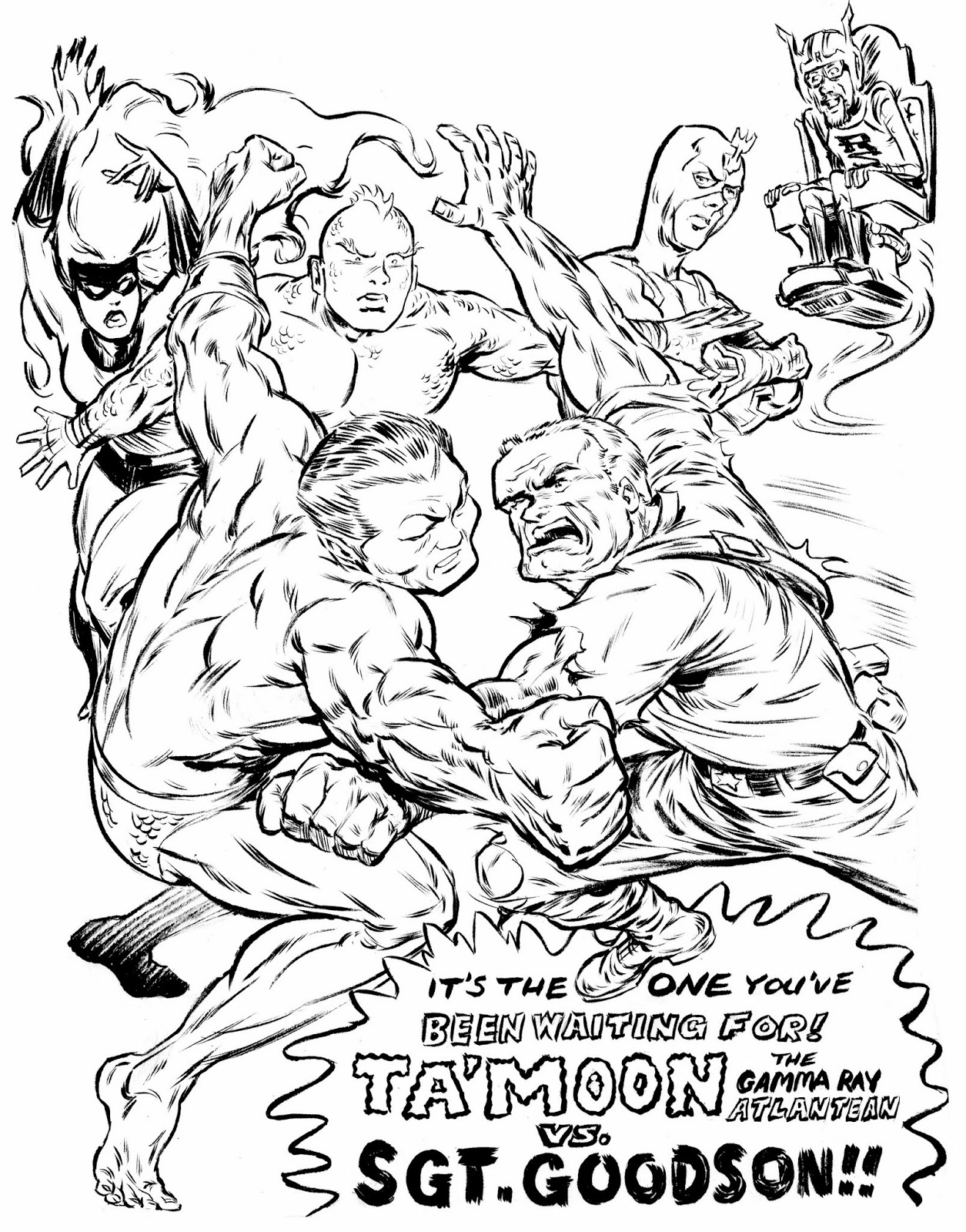 I'll start on the 11 by 17 tonight.
It's about 4.4 by 6.8 right now.
I'm going to make the central action smaller, let it breath a bit.
The commission comes from an Ardmore, OK fellow I met at OafCon who loves my art.
He bought a couple of Hulks from me.
The Tumblr with an earlier  Thumbnail and some adjustments to this one.
Posted by MrGoodson2 at 6:13 PM 13 comments:

Because I Don't Have Anything Else

That panel from last week, expanded... 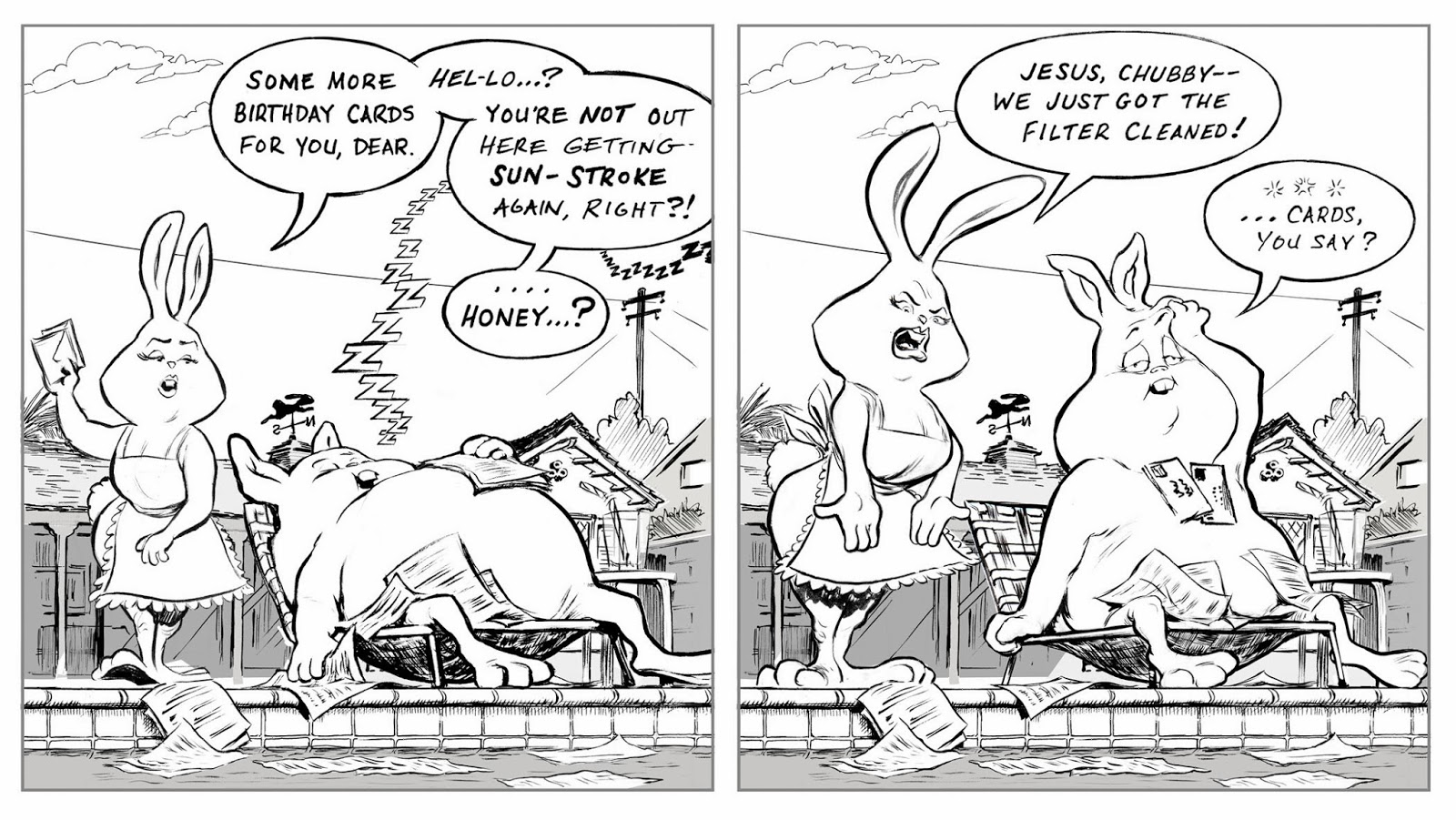 Couldn't let a Tuesday go by without posting something original.
Posted by MrGoodson2 at 10:08 PM 14 comments: OCCUPATION: Bank Guard
LOCATION: Atlanta, GA
POWERS: Vampiric abilities
Speeding Bullet Comics in Norman OK  had an event where local artists are given the task of creating heroes based on randomly generated traits.
I said I'd be at the event 2 months prior but ended up with the new job keeping me away.
So Matthew Peice the owner of the shop fed me some traits last night.
Going to take it into Photoshop, jazz it up, then name him.
Go ahead and post suggestions. You may come up with something I have to use. 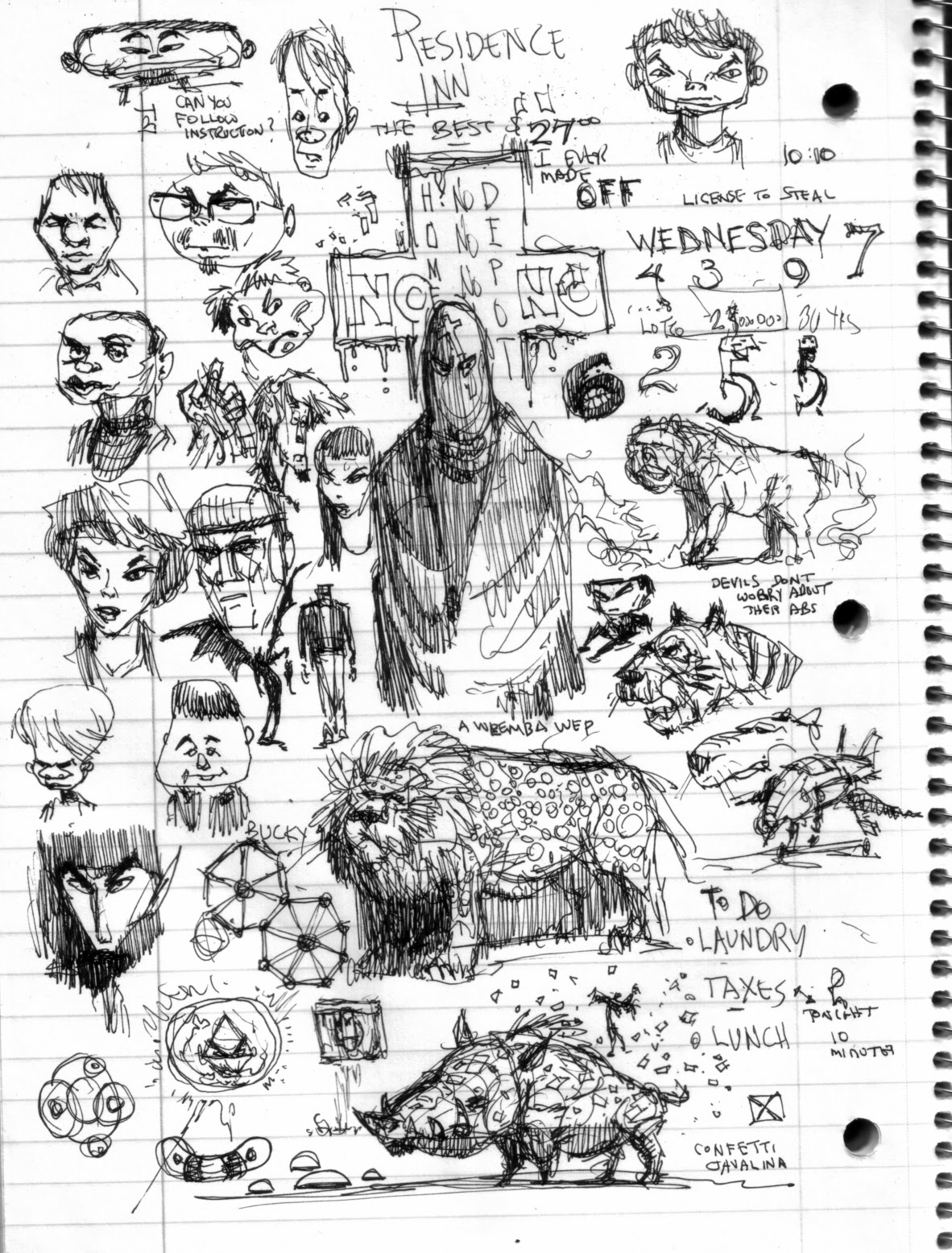 Spent the last  3 hours at work in the break room, alone, happily doodling and thinking. I've waited 45 years for this job. 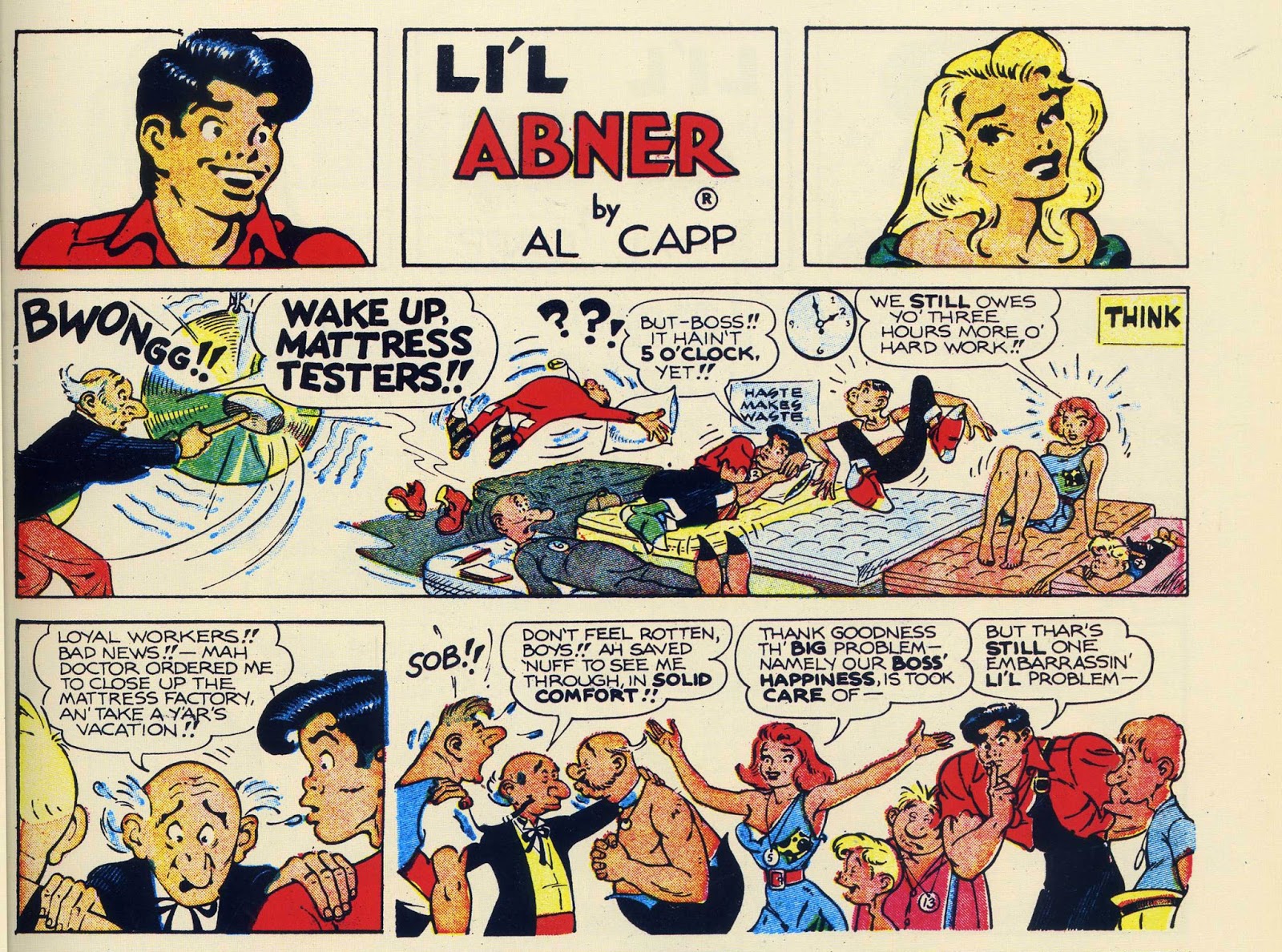 Sorry to momentarily hijack your post Ellis, but when you mention "mattress testing" and single strap overalls in one post, how can I resist?
Tom 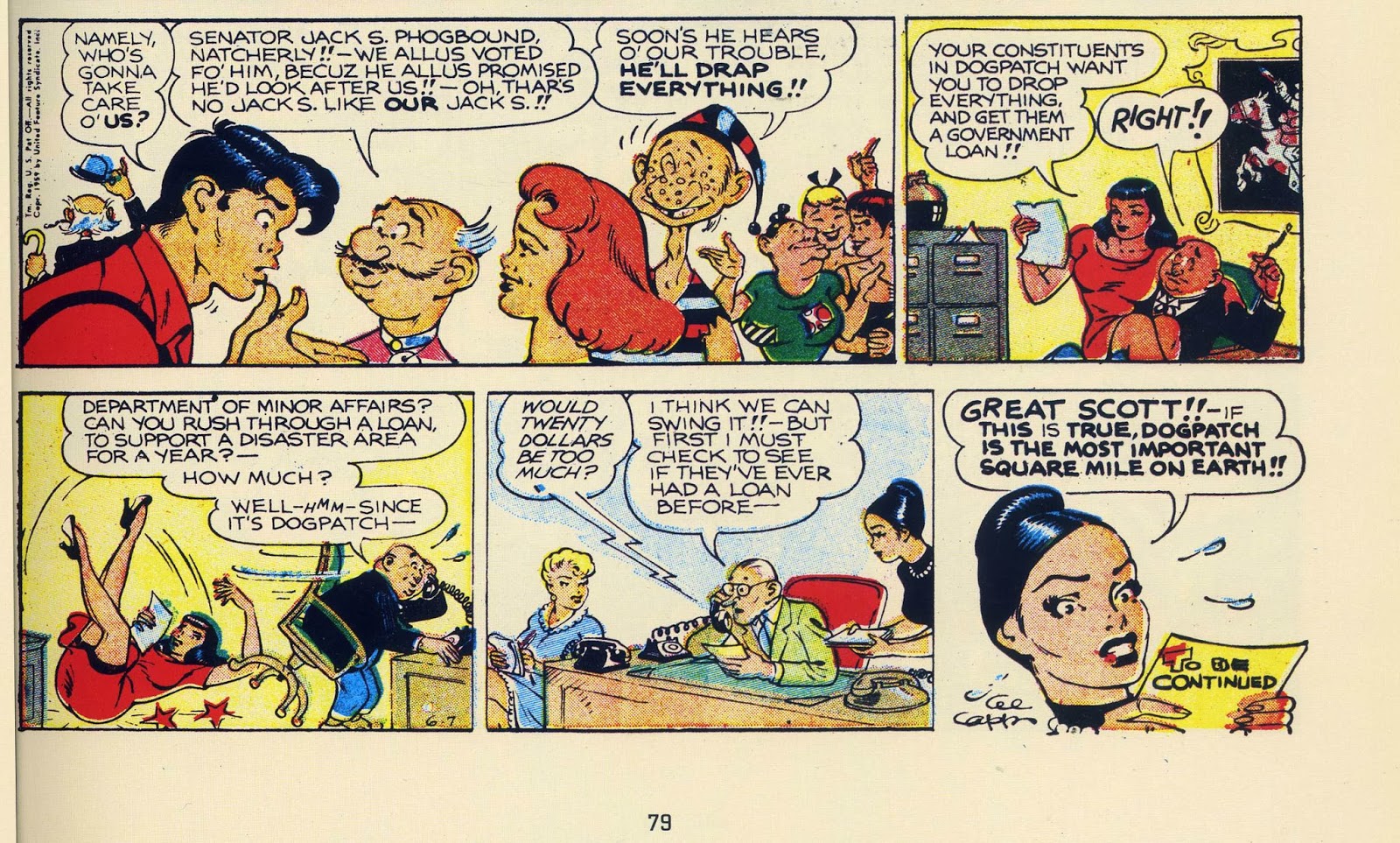 Manga Studio Users Will Want To Know This

This
Allowing you to erase almost carelessly as you clean up. I hope 4ex can do this. I'll have to check.
This would re-energize my interest in Manga Studio if I'm able to draw-through, make a big mess , then easily edit the mess. Well, it says in the headline it's a manga studio 5 tip.
Posted by MrGoodson2 at 9:47 AM 4 comments:

Marty could pull this off. I don't know about this Glenn Kolleda's effort

C and p from tumblr
Back in 1989 “the King of Comics”, Jack Kirby, teamed up with sculptor Glenn Kolleda to create a sculpture bringing his Jacob & the Angel illustration into 3 dimensions! (via STRIPPED: Jack Kirby’s Jacob And The Angel Statue)