Putting Some Midgets To Work 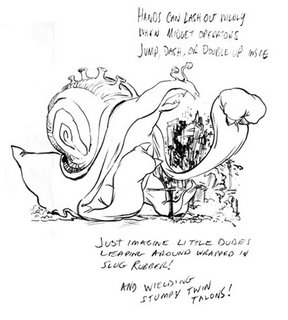 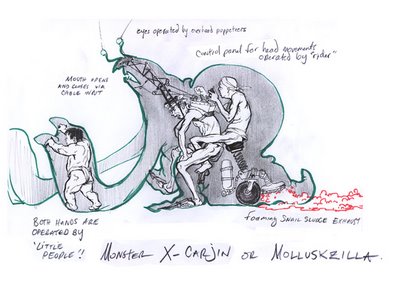 Certainly he needs a better name, something more memorable and menacing; and also the long-arm concept owes a mighty debt to Ellis's Kaiju; but the idea of sticking as many "Monster Technicians" as possible into the suit motivated me. In addition to the piggy-backed pair of monster actors working in the greater thorax region of Molluskzilla (it's embarrassing even to type that name), each slug mitt would be operated from inside by a little person; their independence of movement would be limited only by the rubber tether that kept them attached to the larger, lumbering body. And just imagine the hilarious mayhem that would result if, during combat, one arm were severed completely from the body proper, only to rejoin the fray as an autonomous actor, a free-lancing fist that would continue to fight--all the while dragging its bloody stump of a rubber arm?

(Those who detect a Gallic influence on my design are not wrong, though I don't eat snails myself.)

Who wouldn't pay to see this matchup?

The apparently caricatured ethnicity of the monster operators would be shameful if it were intentional, which it is not--I tried to make a grimace on the hunched over guy's face, and damn if it didn't come out looking like a bad propaganda poster from WWII! My apologies to everyone, everywhere, esp. the hard working people at Toho Studios.
Posted by MrGoodson2 at 1:56 PM

A spectacular effort! My hat's off to you! I would certainly pay good Yen to see that match up!

Awesome job Marty. A master anatomist and sculptor's skill come through in that sketch. I love the characters poses inside the snail. very heinrich kley. You'll be concepting French sc i fi films with another couple of these in the portfolio.

Those are FANTASTIC Chino!

There's an element of practicality and it lives side by side with the whimiscal. Just great!

So much so in fact, that I must pay homage to you with my next post.