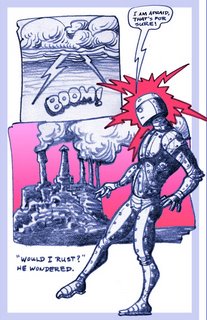 Tom, I love this one (I loved the last one, too). Great flow in the figure, and I like yr colors. It's becoming more like an abstraction of a comic book, less like a story. I like that.

Even your lettering is loaded with appeal!

The penciled look is very cool, but I can't help wonder how the whole thing would look inked (in that Rick Geary sort of style you like). I like it where your blacks become real graphic and defined, like in the speech bubble and the red lightining surprise halo.

I'm going to ink something tonight. I've been slacking of late. I'm goibg to use your strip as my jumping off point. That will make it kind of like a jam

Cool Ellis. I'll be anxious to see your post.

I have tried many times to learn to ink with a brush and it always feels uncomfortable. It's one of those tactile issues I think. A brush feels mushy to me because I'm heavy-handed.

I might try using a pen nib again or ink marker. I've been told that a real feather quill is the supreme tool for inking, halfway between a brush and a pen. Anyone ever use one?

I have never seriously tried a feather quill... I'll be very interested to see the results.

I agree that this is a terrific comic Page(?). The only other comment I have is that the panel with the factory reads as seperate from the robot, and I don't think that was your intent. I think a more concrete link between the 2 would help.

Thanks for the feedback Rick. I wondered how the disparate elements would strike the viewer, because this drawing is actually part of a larger, unfinished story.

So the links between the elements are mostly in my head. Since I've despaired of the story ever being done, I thought I would just start posting some individual images from the story that seemed the most intriguing to me.

I'm glad you're doing the single shots of images that inspire you. I feel like a member of the Knothole Gang peeking through into your backyard workshop ... BTW: I'm going to this weekend's Gnomon Workshop meeting. Going up Friday after work; it starts at 9am on Saturday and goes through Sunday p.m. Lots of different presenters, the only one I was quite familiar with is Justin Sweet because he was down the hall working at Black Isle while I was slav(er)ing away at Interplay. I'll post some thoughts and comments on Monday ...