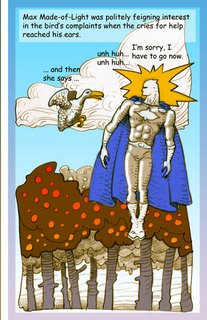 Way cool Tom! Always love your color choices and the decision about where to put various levels of detail.

One thing though - I read the "balloons" in the wrong order. IF the bird should be read first, I think you need to slide it's words up almost under the narration. Then the "UhUhs" of the dude could be slightly lower and to the right of that (just left of the dude) and his follow up "gotta go" balloon maybe under the duck? I wouldn't want you to cover up any of the cool tree tops or anything, but sometimes that has to happen for clarity's sake.

But maybe the sequence isn't really important! Did I ever think of THAT?!? Noooooooh!

No doubt this is the sort of nonsense that Aquaman has to deal with... gossipy Bass!

Now that I think of it, maybe the second part of Dok's comment is a good idea too. Is it funnier (and more true to life) if the bird continues to talk after Max tries to excuse himself?

I like the burst around his head. Maybe a little Wayne Boring , one leg up type pose so you can tell he's ready for action

I just really am jazzed by how well Tom M. makes all the disparate things work together in his panels. The super guy is a symphony of cool stuff. The bird reminds me of the shape of a roasting turkey but one that can talk and that can inexplicably fly ... and the background elements help the overall picture without being too detailed so as to crowd the foreground elements out ... Keep it up, Tom!

This comment has been removed by a blog administrator.