The Night of the Mollusk 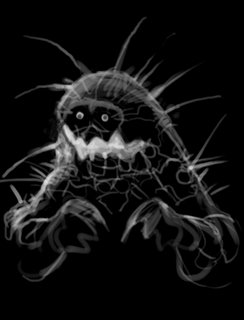 Very, very cool. All the many mollusks I've ever known have been uniformly unsure of themselves and their surroundings (*). For me you really captured that with the eyes.

ok
Dok
(*) perhaps that's why they make such great employees?

Ha, thanks Dok. I was whipping out my sketch in photoshop at work, usually unmolested if I take a couple of seconds to surf here and there. During this sketch I had two people slip up on me and ask what I was doing. So I left it kind of rough and sent it through. Next week I'll do something memorable. Hey, we got some sort of odd notice via email about some software outfit with Moon in the ttle, about to be acquired. The only reason I noticed was that John Rowe was apparently the spokesman. I'll try and remember to send that to you. John Rowe, sopping up more cash.