It's What's for Dinner 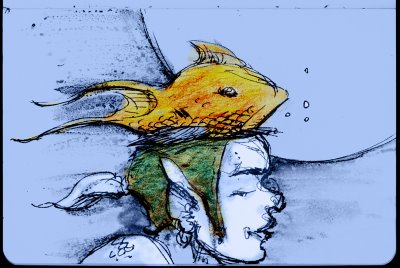 It's tuesday and my girl has fish on her mind.

I dig this. Is it all digital? Or started as a line drawing you scanned? Makes me want to do another one with more texturey brushes. But i don't want to hog bandwidth.

Fish drawings are always winners in my book. I like that loose line in combination with the wet strokes in the background.

Hey Dok, and all you Barry Windsor-Smith fans out there. Did you know that the Fantagraphic reprint of his "Freebooters" series was published in hardback last year? I don't think Comic Gallery carried it. I just picked it up at the local comic shop here in Piedmont.

All,
Thanks for kind words!

Ellis,
I've gotten some of the new Moleskine sketchbooks and I'm experimenting w/ a fountain pen and a waterbush pen. The surface of the paper is sort of slick which prevents the water from sinking in and spreading as normal - instead it kind of bubbles and dries like sponge marks. Sort of fun to play with. Then a little color in pshop.

Tom,
I saw the BWS Freebooters book on Bud Plant but am going to order it through Amaazon. Did you dig it?

Oh yes. It's quite beautiful, showing off the usual BWS combination of genius and self-indulgence. If he could just subordinate himself to a good editor to keep him on track...

Maybe if we function as Kathy Bates to his James Caan a la "Misery".

"No putting yourself in the story, Barry! Where's my sledgehammer?"