Wandering the local library a few weeks ago, I happened upon an old book about The Three Stooges, and one of the chapters detailed the history of a series of Three Stooges comic books (and spinoffs). I loved the art, which evolved from a kind of classic forties funny-book style, to something approaching Hanna-Barbera Saturday morning design cleanliness. And turns out they were all designed and drawn by one guy, Norman Maurer. Sadly, only the first couple issues featured Curly. Then it was Shemp (whom Maurer caricatured marvelously). 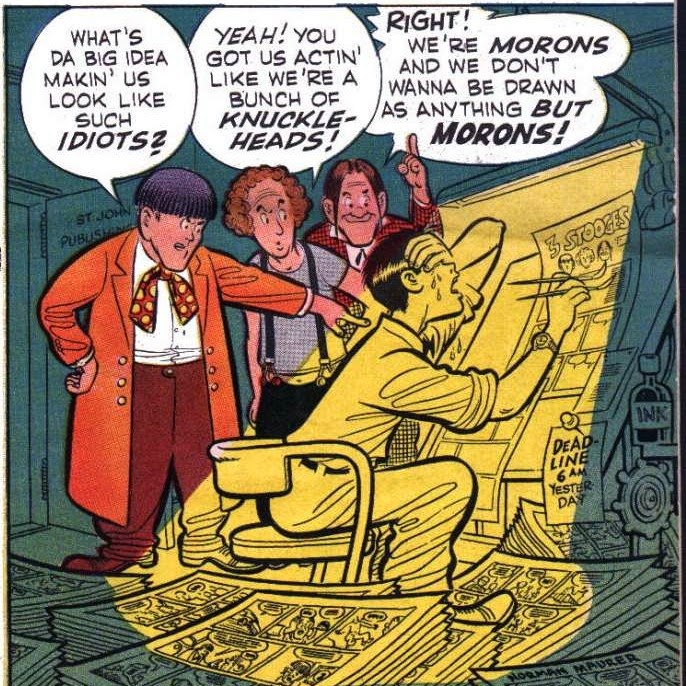 The spin-off of the junior version, "The L'il Stooges." That Hanna Barbera look--so clean. Who wouldn't want to read his?? 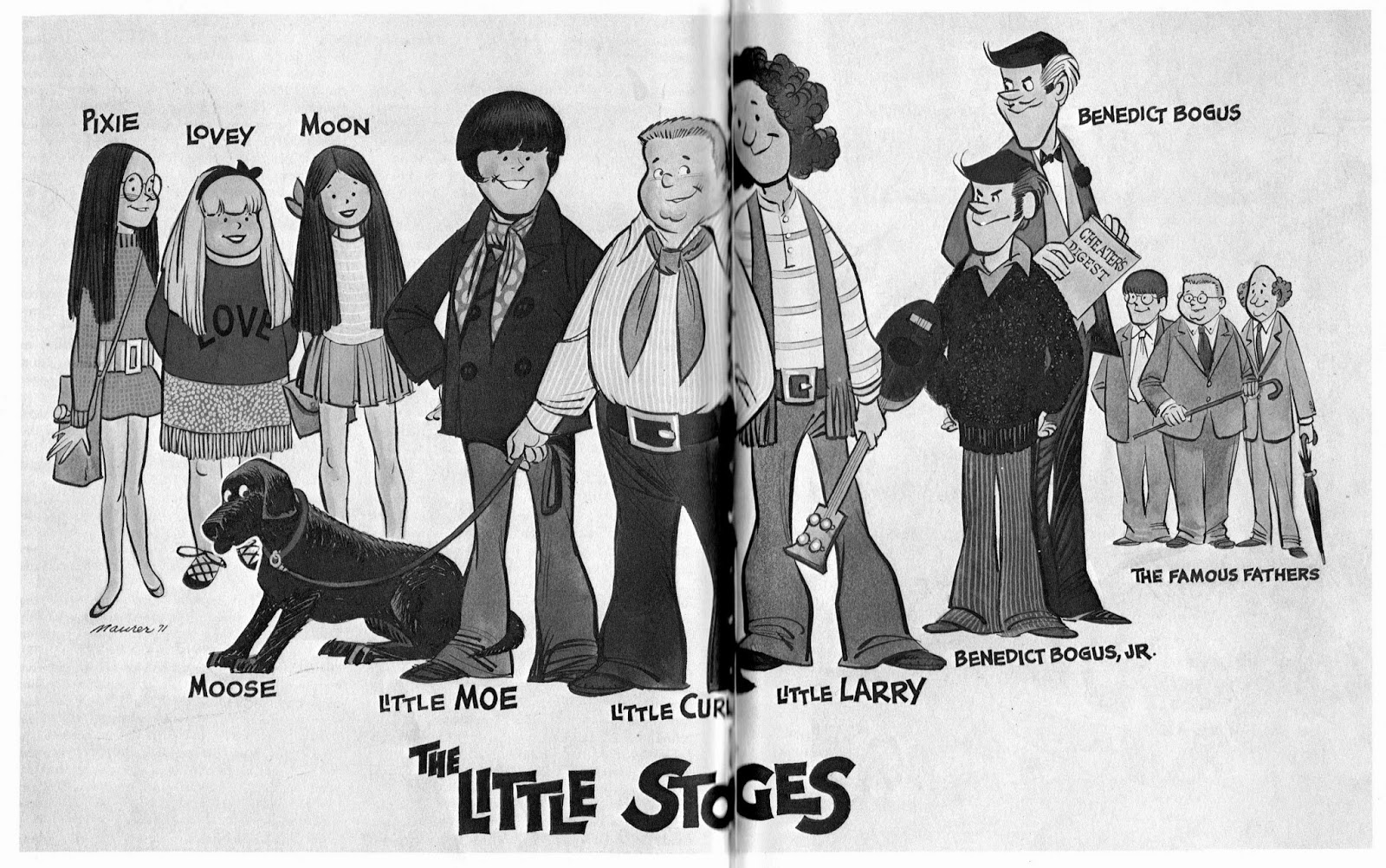 They've recently been collected in a  few "Best of" volumes. Click HERE for a look at vol. 3, including a complete story ("The Fluke Spook"). Love the panel at the bottom of this page, and the design of the "spook." 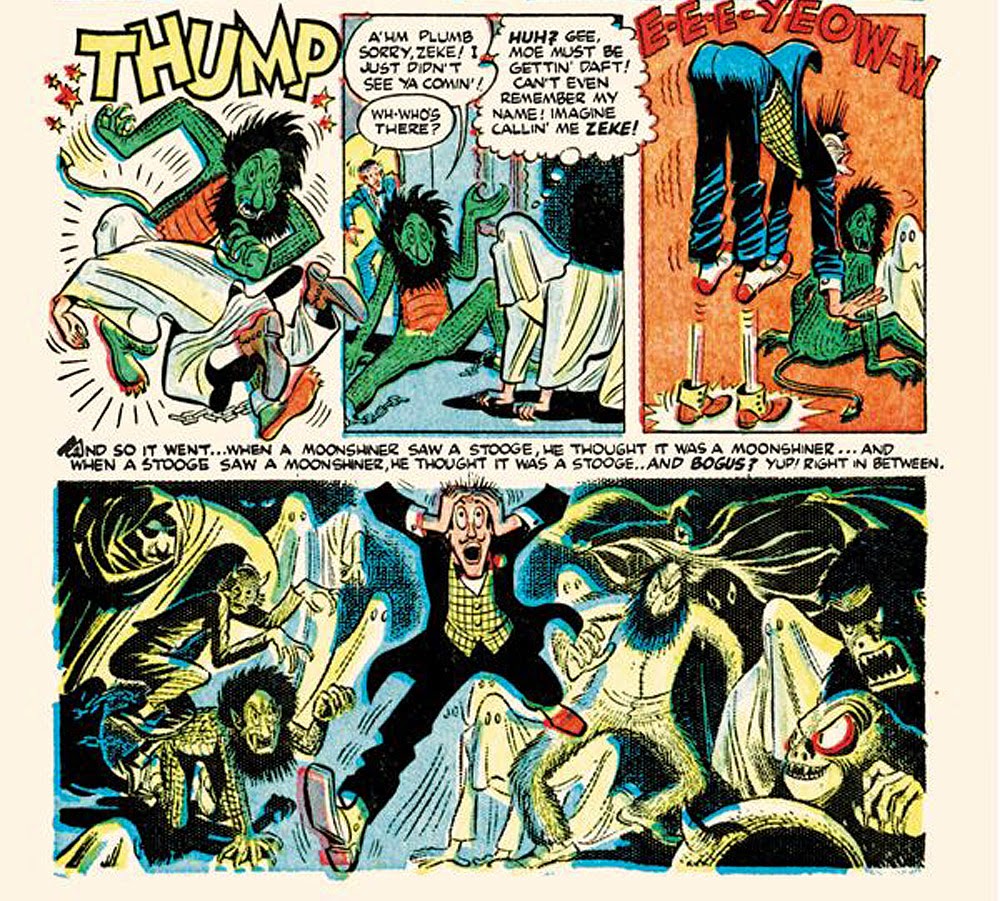 Interestingly, this guy Norman Maurer was a childhood pal of Joe Kubert (who facilitated the original Stooges comic book deal with St. John's, and became a partner in it). Maurer was already a successful comic book artist when he started on this project, but then he went on to marry Moe's daughter (!) and eventually to write, produce and direct a few Stooges feature films.

PROOF that comic book art is a gateway to celebrity.
Posted by MrGoodson2 at 12:53 PM

I love the Stooges. I need to get the complete DVDs.

I've seen that name before. Looks a lot like Toth. The Drag Cartoon style of Toth.

You're right. It's pure appeal.

I've outlived him by a year and I've got about 2 percent of his achievement level.
Interesting he was associated with so much that is pivotal to me. The Angry Red Planet was the FIRST movie I saw in a theatre setting. A drive in with the parents in Tulsa.
Spacemaster X-7 directed by Edward Bernds, who did all the best Stooges. I've got a good copy of that one finally. It was practically a lost film. And I considered The Three Stooges Meet Hercules one of the best adventure films I had ever seen at the time I saw it.

This style reminds me of those early Mad covers... the ones when it was still a comic. It's a fun approach.

Elz, yr movie memories are too great. Man, I'd love to read a more in-depth treatment of yr early movie experiences...this may tie in with yr Kong musings. A Pauline Kael-style memoir, but with Goodson styled illustrations honoring the flix you chronicle...

...I considered The Three Stooges Meet Hercules one of the best adventure films I had ever seen at the time....

What makes the statement about The Three Stooges Meet Hercules even more implausible, The Curly was Curly Joe.

Doesn't show the trivia I wanted confirmed. I think Emil Sitka reprises the "Hold hands you lovebirds." line. At the end when fake Hercules returns to his own time.