Since people here were nice enough to notice I was gone to A.P.E., and requested a summary of same, let me put down a few quick thoughts....

1. My favorite con for the simple reason that it most closely fits the sort of work I'm doing. No superheroes, no mainstream genre work (sci-fi, horror, erotica, manga, etc.--and yet elements of all these genres were present in much of the work, but without any of it really qualifying as mainstream). No big publishers like DC/Marvel. No Hollywood. Everyone worked from the same 6' x 3' tables, too, so it's all very egalitarian. No custom big boy booths.

2. Very local-centric. Most of the artists and almost all of the Con-go'ers were Bay Area folk. Which was nice. Many students, too.

3. Most everyone bought something  (which, after Rose City, was very refreshing!). Biggest complaint I heard from attendees was failure of organizers to hand them a complimentary shopping bag with their badge and program. People wanted somewhere to dump their purchases.

And the new venue ( at Fort Mason, inside an old military warehouse on a wharf jutting into the S.F. Bay, with stunning views of the Golden Gate and Alcatraz just outside) was great. But up in the air where it will be next year.

Personally I did pretty well, meaning I was pretty dang busy the whole two days, selling steadily (which was a huge relief). Tho' in the end I didn't make much...I covered the costs of my table, but not all of my printing, and nothing of my hotel and meals (but then Blair and I had planned to make a little vacation of the weekend, so I didn't have any realistic expectations of covering those costs...that was in the fantasy, I-sell-everything-plus-a-buncha-drawing-commissions scenario....).

The ad in the program worked great (and Tom, you were right, I shoulda' added some tone); but more than that, people seem to remember The Teen Ellis. I had multiple people stop at my table when they saw my banner and say, "Oh, I recognize him--you had the ad in the program." (experiencing the power of advertising at work = thrilling!) Also, banner was a big success not only for bringing sales, but more importantly, for giving people a good idea of what the comic was all about.

People were very positive on the book. Going into the weekend I honestly didn't know if it would get any play, but people definitely appreciated the art and thought it looked funny. And quite a few bought. Phew!

Met lots of super-cool people, got a lot more names on the email list, and did quite a few fun drawings. Printed 56 FUME comic books, sold about 24 (? haven't counted 'em yet) plus another 7 or so sketchbooks, which sounds pathetic but in my experience is pretty dang good and really did keep me busy the whole time. I took photos of about half the caricature sketches. Had some fun offering to do historical or fictional or musical personages. Wish I had pix of a really funny sketch I did of Homer (the Greek poet, not the Simpson) for a guy writing a novel involving classical figures, and another of two topless girls boxing (!); the guy who requested that one liked it so much he commissioned me to do a large-scale color version with more girls (yipee!).

Best one I think was the Elton John request. I don't really know Elton but this one came to me in a blaze of inspiration and it had the guy who requested it busting up. 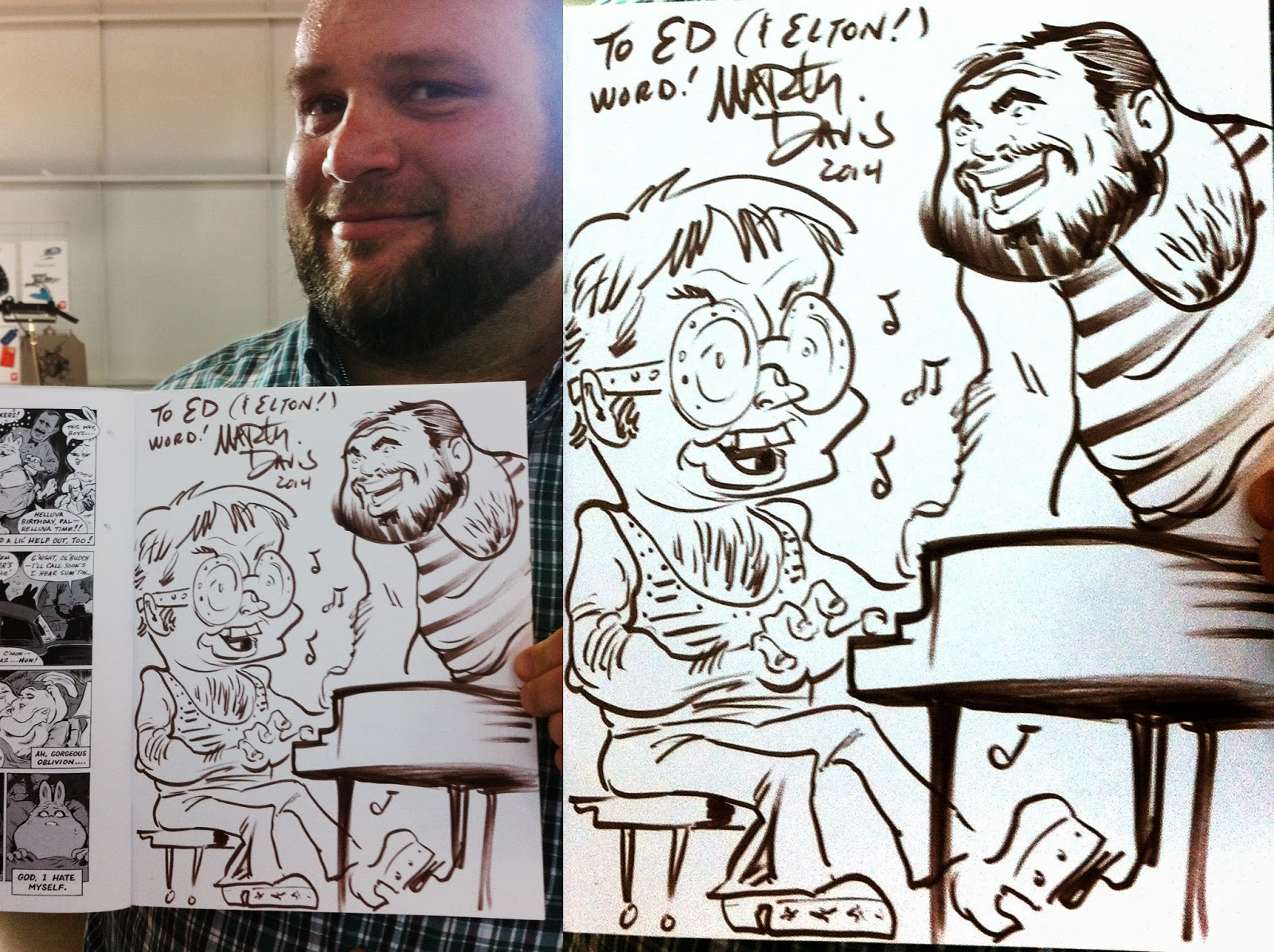 Also, wouldn't you know it, last drawing of the Con and I was finally getting my groove going... 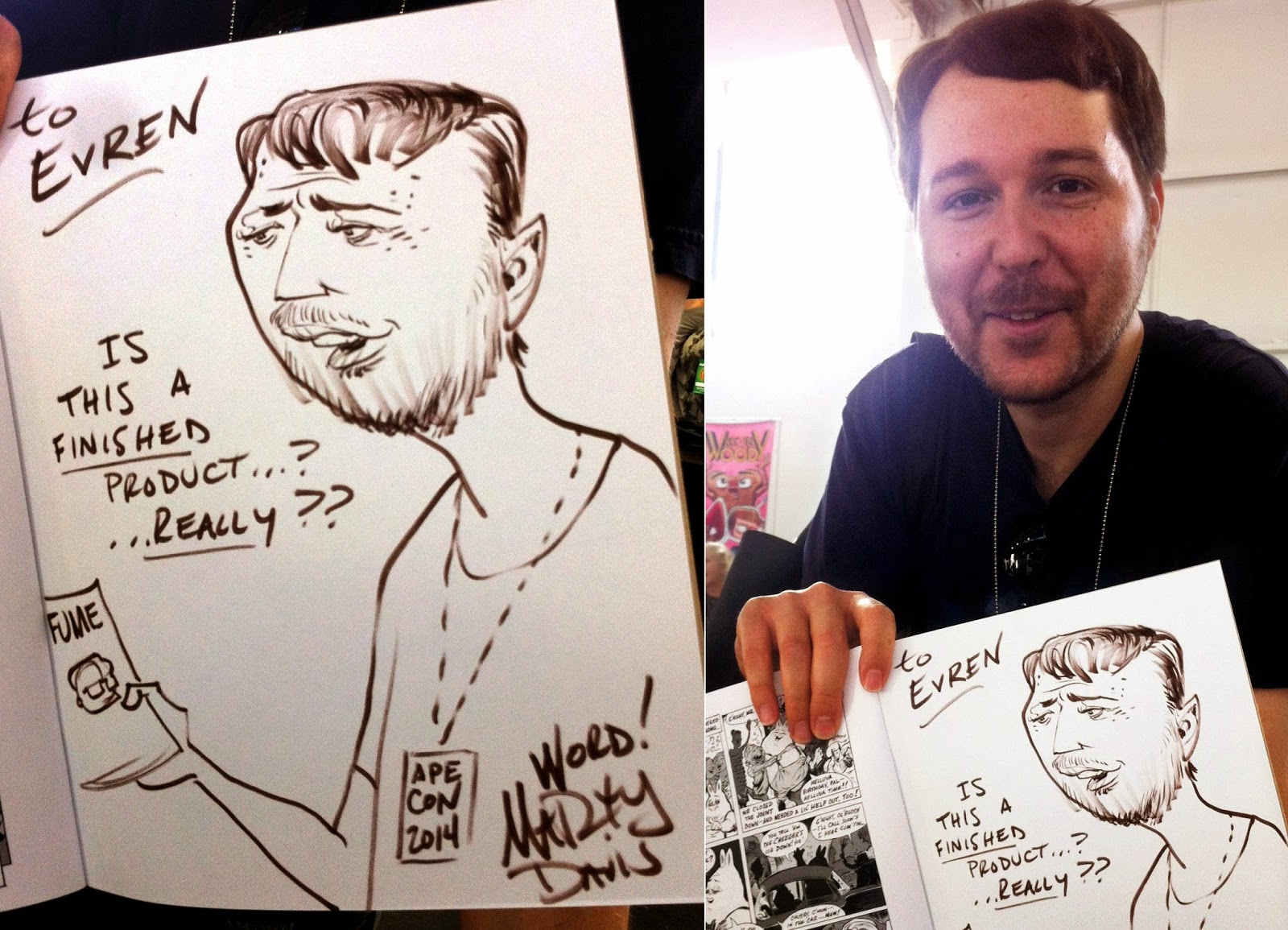 The interwebs have been ablaze with advice/complaint/invective re: how one should or should not go about making money at any given Comic Con. I don't know if there is more to say on this subject, but if there is, I'm too gassed to say it tonight (we drove straight-thru last night after a Sac-Town dinner with our famous T.A.G. brother Jimmy Gorham, arriving home at 3:30 this a.m.). But I will say there is this gnawing unease I feel about the tone of what I've been reading from those who are (or claim) to be "winning" the Con wars (you know, the, "get out there and sell, sell, SELL!" crowd): I don't go to these things to be sold. I go to see stuff that knocks me out, and possibly buy it. Barring the knock-out response (which is rare, I admit), I will often make purchases of marginal items based on either a sympathy for the seller, or a sympathy for the material ("they're trying to do a fun Kirby Monster mash-up--OK, I'll spend the $10 bucks..."). It's cool and I guess inevitable that people want to be really savvy about how they market and merchandise themselves, (and on the flip side, it really does suck to sit with yr very personal work on public display and receive not even a passing "Huh," in response...), but I will say the best artist/creators that I know of all SUCK at this marketing/schmoozing game that is being preached so loudly across the web. I don't care that Dan Clowes or Adrian Tomine aren't giving me the razzle-dazzle when I pass by. It's enough that they've wrung their nuts out trying to do good work.

I will leave you with a shot of a man we all know and love, Mr. Jason Weezner (so great to see him!!): 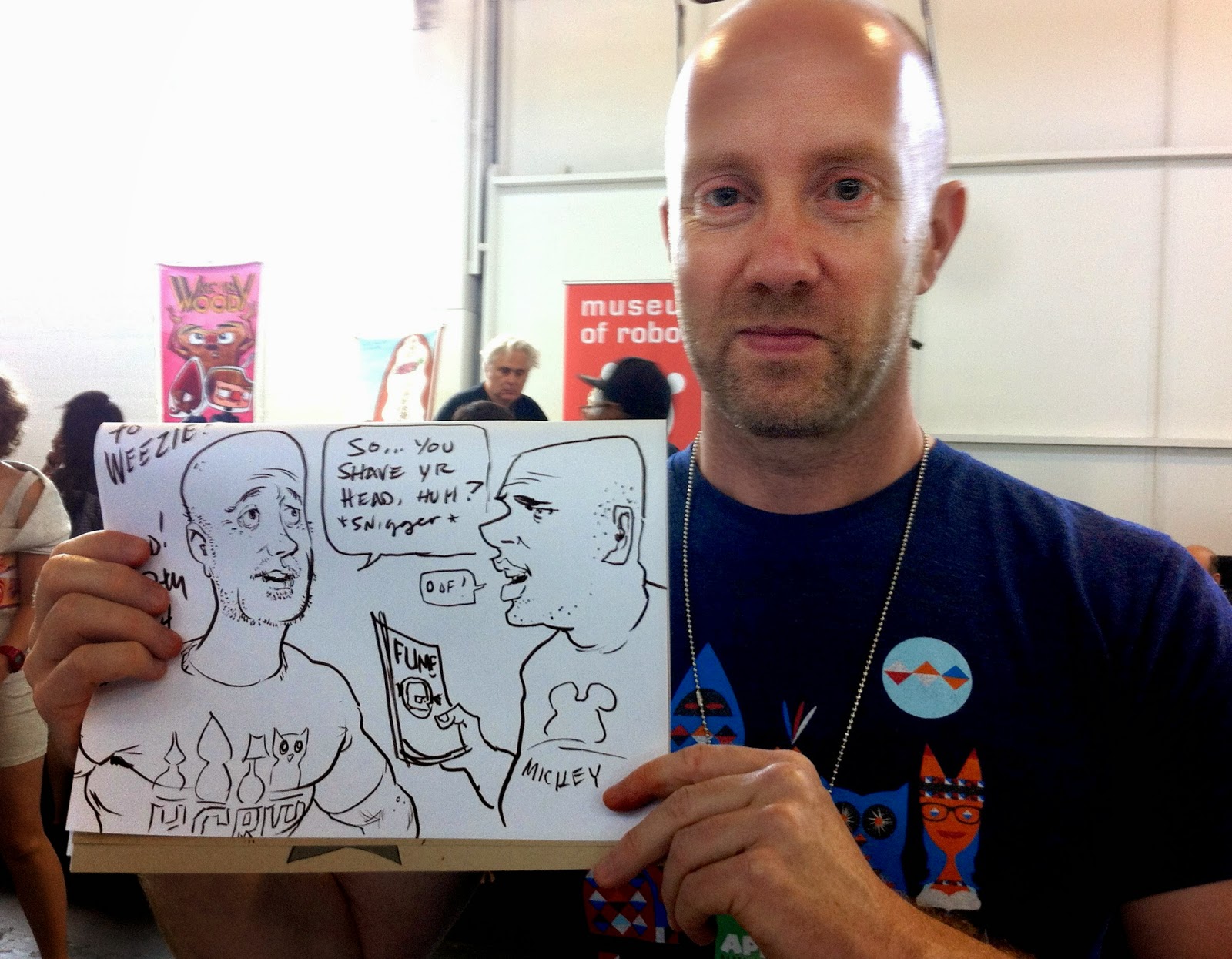 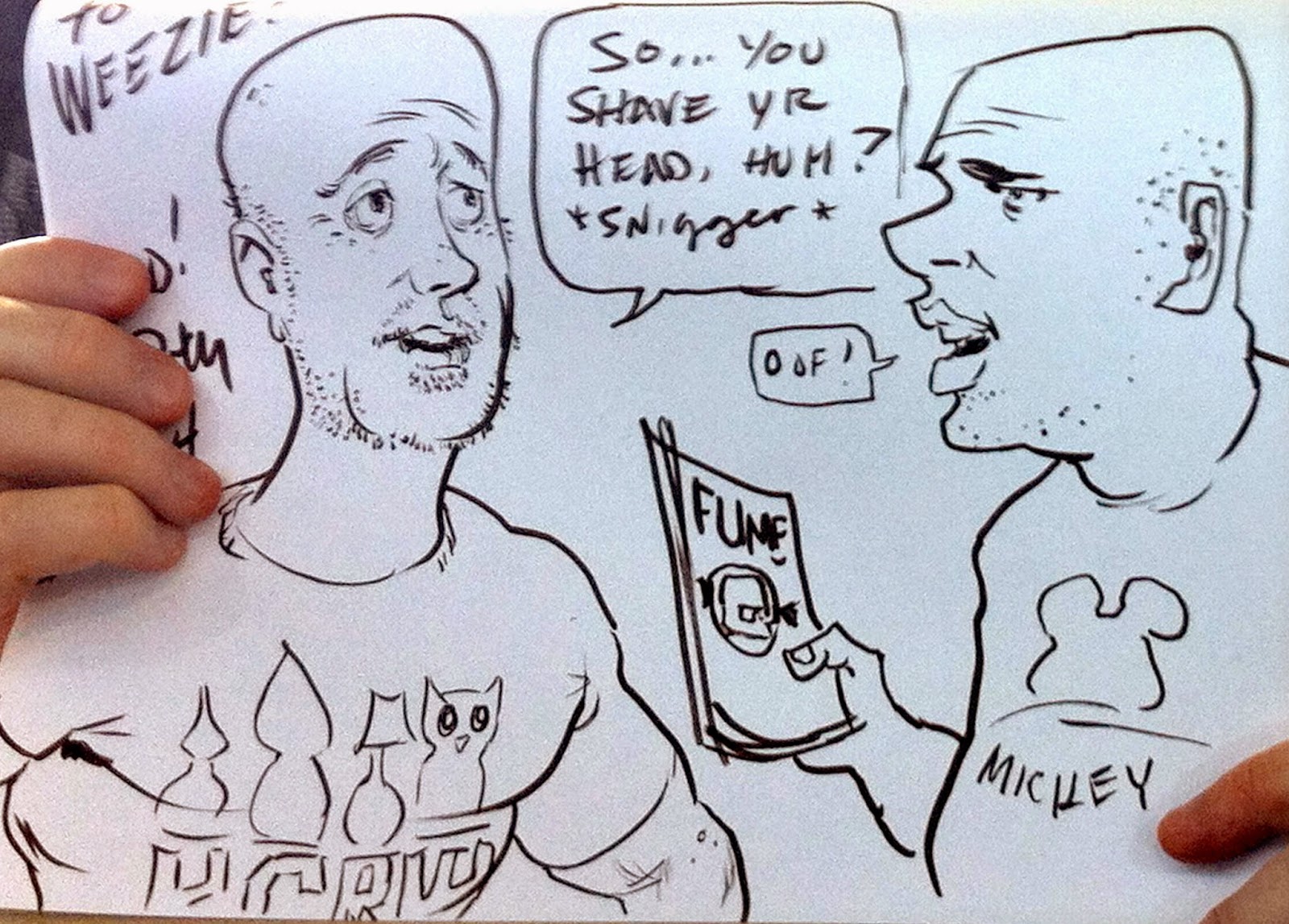 Okay, I'm sold. I want to attend next year (as a fan, not a merchant). Great drawing of Mister Weesner! Jason, if you're listening, hop on in here and tell us about your experience at APE!

Great write up Marty. You've sold me on APE. Sounds like a con to get good connections and some knowledge. You should blow into the NYCC next time. I guess they occur a week apart? You still have time. I think it's this weekend. Or maybe it occured at the same time. I've been seeing reports.

Cool that you managed to see Jason and Jim.

The after con follow up commissions can be where an artist gets his money. Glad you got one of those.

And advertising. I imagine if the product can be produced, the right campaign could make anyone rich. Get in a Ron Popeil state of mind and figure out where the ad dollar needs to be spent.

Did any writers approach you wanting to collaborate? I always wondered how Pekar did it. Probably mainly did it with cash. Using his Gov salary and spread it around.

That comment about finished product. I assume it really happened. Very funny.

Oh! LOL! OK, not the worst picture of me. You can go ahead and post that on your FB if you want Marty. :)

My experience at APE. First off, a lot of amazing things to look and just not enough money for me to support everybody. The space was much nicer than the old downtown location. Some merchants were very friendly. Some merchants were not friendly at all. Some merchants were so friendly that I didn't even get a chance to look at what they had! I hold Marty and my friends over at Snorffles & Meeps as the perfect examples of friendliness and salesmanship: catch the buyer's eye, say hi, give a brief introduction if they saunter over, and then leave them alone to look through things until they have another question. Perfect!

On my fixed teacher's budget I was able to pick up quite a few things to read and hang up on my walls. It was great to see so many of my students wandering around, It was wonderful to catch up with Marty who hasn't aged a day since the last time I saw him. Kale shakes? Jogging? I dunno, but sign me up! :)

Great to see ya too Marty. Love the books!!!!! Maybe next year...I'll will have to see where I'll be at that point. Always in motion the future is.

If Marty's drawing is to be trusted, you're looking pretty lean and mean yourself Jason.

I think we walked that Ft Mason area when I played Bus driver for my aunt and a group of teachers. Wasn't it involved in controversy? George Lucas wanted to buy it.

APE sounds really great! Perhaps more of these sorts of home grown/maker style cons will crop up.
In regards to the Con salesman discussions on the web, I think most of them have been coming from a place of offering advice to people who haven't been selling as well as they would like. Also, what I've read is people pointing out some of the realities of getting folks interesting in your stuff at cons these days. I think it was all offered up in the spirit of good will and helpfulness. Would standing up and being more engaging with con goers at RCCC ended up in me generating more sales? I don't know, but it probably wouldn't hurt sales. Ultimately I want to get my work into other people's hands and at least cover the expenses of the con. If it can lead to something that I can make more than that off of it, then it may be something I can do when I 'retire' to earn some extra cash.
I do think that for the next ECCC I will be offering some prints and some little items that can go for just a few bucks... I think that was good advice. Some people don't come prepared to spend 10-30 at lots of different tables, but they might be willing to spend 2-5 bucks on something that catches their eye.

But I think you're looking much better for the intervening years than yours truly! Glad Tom noticed yr rippling vitality--it is impressive!

Jimmy, glad you like the books. Now to finish the dang thing!

It strikes me that some of this Con conversation that's been raging lo these few weeks is the product of a more general squeezing of the working stiff artist: lots more competition, lots more content, and a lot more of it available for free (thank you internets), with far more artists forced into a more entrepreneurial, freelancer lifestyle (layoffs and downsizing, anyone?). Heck, today almost 100% of this blog fits that "downsized" description...

ALSO: while at APE I had a nice visit with the estimable Brent Eric Anderson and wife Shirley. He is pounding out the Astro City and loving it!

Cons will probably whittle down to just deep pockets with PR goals. There to advertise something coming at you later.