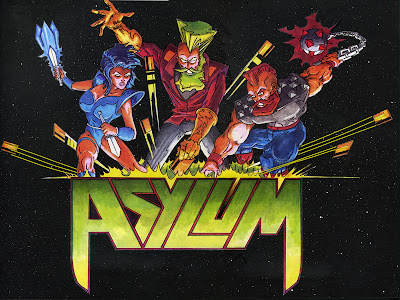 I am not Tom, nor am I Patty. Which is a great relief to Tom, ya betcha sure! I am Dok. But I could not post immediately as such, due to some problem with internet tubes and trucks no doubt.
The image above may only mean something to Mr. Ellis. I wonder if he can remember the name of the three characters featured? "Asylum" was a cabinet type video game that we both worked on about 167 years ago. Back when pixels were as big as your thumb and only came in 8 colors.

But all that means nothing. Dust in the winds my friends. "The Earth is Hard and the Heavens Far", as they say in Central Asia. Here in my head they say, "Eh" instead.

Instead... ah. Yes. Instead.. I'd like to give forum to Marty's idea about a TAG table at the next Con. I like that idea tons.

As I said, I am up for it, although I recall that there are some rules. Jeff would probably know the most about having a group offering at the con... small press is the way to go, I recall...

Also, I had nothing to do with it, but I recall you mentioning Asylum before. If memory serves (as The Chairman would say) it sounded like it would have been a really cool game.

It was a cool game. It was finished! It was at a time where home games were just set to supplant arcade games. We tested it at an El Cajon bowling alley/arcade. It was being enjoyed.

And even though I can't remember the characters names ( I can barely remember my name, names are my superhero weakness) I remember the game's original Title.

Then Jim Jones test marketed that title out of existence.

Full points for Goodsondor! I'd totally forgotten the original name fo the game. The characters were Rip, Rak and Rol.

Dok, it's great to see your byline on one of these TAG posts--even if it flies under the Tom Moon Flag. I have not been keeping up with this blog like I should--I've hardly been on-line--but it's great to see the TAG community still going!

And yes, not only am I 100% behind the idea of a TAG TABLE at the Con, I have left my job in order to devote myself to this project (among others).

We will need "product." Ellis's "Idle Hands II" is ready for sale, and I'm badgering him to have a second book in time for the Con (you can do it!); I am ready to jump back in where I left off last summer (need I remind everyone of SHARKFIGHTER: The Adventures of Jimmy Bowles?), and produce a slim volume of amusements under my own imprint to offer the Con-going public. Rick and Jeff, you guys both have LOTS of wonderful material just itching to get bound up and offered for sale. And Tom Moon, your great Galactic tale clearly need a public airing. And there's Scott and Dok--lots of obvious contributors.

Are people interested in a TAG Sampler? Maybe 4 to 6 pages from each of us?

Now that I am a free man again, I will become a more regular presence here in TAGland.