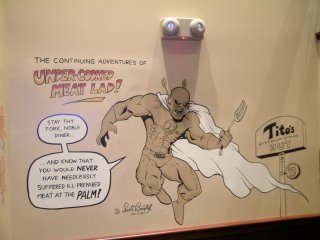 Here's an interesting sidenote to that last story about Shel. I was the one who got his picture put up at the Palm Restaurant. I know the guy who paints the images on the wall at most all of the Palm's around the world and he sometimes hires me to help out. They were trying to find more celebrity portraits to put on the wall and asked me if I had any ideas. I told them they had to include Shel Dorf the founder of the biggest Comic-Con in the world. It brings in millions of dollars to SD each year etc. I'm glad to see they got him up.

Also, if you look above the door in the entrance foyer you'll see a re-creation of a big mural I designed for the Los Angeles Palm. I also created a new design for San Diego, but the a**hole in charge painted over it because he didn't like the words "under-cooked meat" in the image. It was a tongue-in-cheek rendition of a superhero character (in honor of the Con) named "Under-Cooked Meat Lad" who saves victims from purchasing bad steak and steers them towards the Palm instead. It turned out pretty cool... but no dice. I'll try to include a picture of it here before it got obliterated.
Posted by MrGoodson2 at 3:43 PM

Huh, a restaurant that didn't want Under-Cooked Meat Lad as their own version of Big Boy.

Some people are so intolerant.

He's maybe the coolest ever, what with those forks on the side of the head and all. His natural foe should have been the "Stake Tartar: The Kitchen Vampire!" ;-)

Not that's the kinda quality we love on the TAG blog.

I want to see the image of the completed mural!

Shel Dorf's face on the wall of a fine restaurant is a sure sign that projectile vomiting and explosive diarrhea will inevitably follow.