1. In the comics, little insert panels are used to focus attention, emphasize a theme, slow the pace and any number of other reasons. Although we're dealing in film, a similar technique can be used. 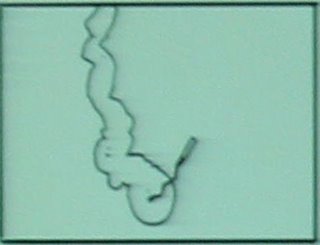 2.BUILD SUSPENSE
A woman needs to burn an herb to drive back an ectoplasmic monster. She's startled as a tentacle reaches for Hellboy. Insert a snuffed match falling in slow motion. The viewer knows she dropped the match without seeing it. He has time to anticipate horrific consequences and he's frustrated because the reveal is momentarily held off. After the quiet of this shot, the action of the next scene of Hellboy trapped in thrashing tentacles is more powerful by contrast. 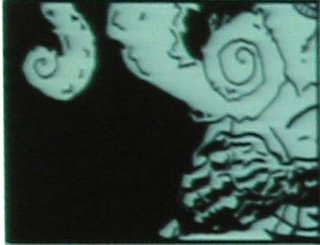 3.FORSHADOW EVENTS
Earlier in the sequence before Hellboy enters the room we get a glimpse of ectoplasmic tentacles and a withered hand. The VO dialogue must connect with the scene. Girl " It all went crazy on him." Hellboy "Could you be more specific." 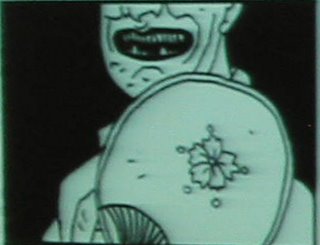 4.EMPHASIZE POV
We know exactly what Hellboy is concentrating on as a fan coyly drops down revealing a smile with way too many teeth.

5.ECHO THE STORY THEME
This is often used in comics when an insert shows statuary or a close up of a painting. Specific sculptures are used because of their history. The mythology depicted or their pose comments on the action. Don't just make up statues to include.
Posted by Mr Goodson at 1:23 PM