Tuesday- Everyone is drawing 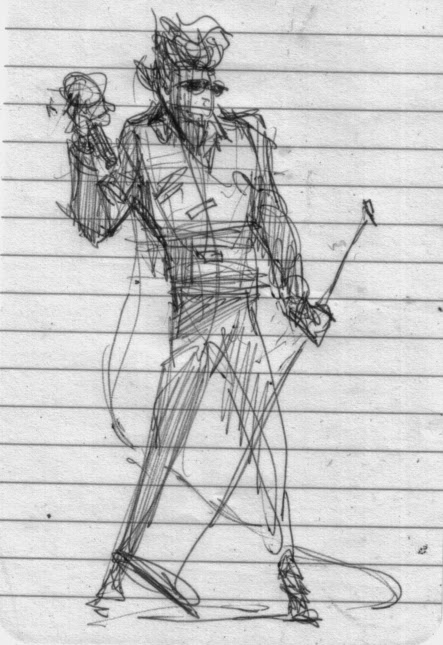 I was worried that top figure was supposed to be me!

Yeah! Tuesday is sketch day! We'll never get one from Tom Moon unless it's 64 pages long (and amazeballs), and Jeff has forsaken us, but what about Ben and Tom Carrol and some of our other brothers and sisters??

(now that I'm back I get so self-righteous about non-posters...insufferable!)

I think the top figure is something Wally Wood used to draw, smaller and more pixielike. Channeled with a little Jack Davis maybe.

Drawing is good. I'm trying to get a new set up that lets me sketch without bending over so much. Holding up my bent over noggin for long periods hurts my back.

That top cartoon is hilarious Ellis.

And Marty is right on target about me being such a non-poster. It drives ME crazy that I can't come up with something every week to share, truly! I've been trying to figure out how to change my frame of mind so as to become more productive. That probably doesn't make much sense, but that's a goal of mine this year. We will see if I can live up to it.

What I thought about doing after finishing that last story was to post one page a week for the next 56 weeks. I was going to pretend that I was coming up with these drawings one after another every week. That would have bought me over a year of grace while I was busy working on the next story.

Tom, I enjoy opus mode. I wish my brain only worked in serious discipline mode/

Thanks for the comments on the cartoon. It found it's way to the page. Recognized Wally Wood later. Jack Davis was always there.