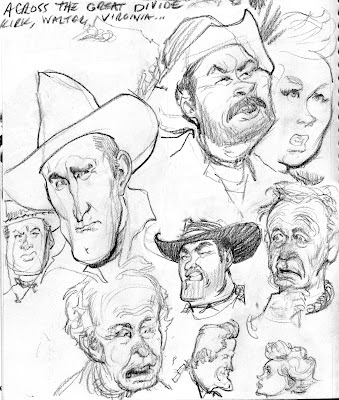 I mislabeled the flick. Kirk Douglas, Virginia Mayo, Walter Brennan. Not as thoroughly satisfying a western as one would expect from the golden age. I rented it via Apple TV.

I know caricatures of Kirk are a cliche, but I like John Agar's expression behind our leading man. I finally got a good drawing of Brennan on the film's penultimate scene--priceless expression as he's just escaped hangin'.

The B&W movies are the best--especially outdoorsy ones shot with a red/yellow filter. Very dramatic!
Posted by MrGoodson2 at 2:41 PM

I always liked Virginia Mayo. Top right captures her Mayoness. Great caricatures. Walter is classic.
I can tell exactly where he is on the dial of Walter from your drawings. He's not a complete hangdog loser
Like in To Have And Have Not
But he's definitely not up the dial to Will Sonnet, man in charge,
Caused me to look for the movie on Netflix Instant. No such luck. I'd have to use Amazon rental.

Glad you liked it! I was going to entitle the post "ELLIS BAIT!"

Brennan's really great in it, but the story (and direction) have him a little all over the map--innocent man wrongly accused, crafty schemer, hard-luck proletariat, cattle rustler, protective papa, pimp, honorable thief, reformed miscreant, and basically decent guy just trying to take care of his daughter and homestead.

But you will never see a more casual use of deadly force than when he finally pulls a trigger about 3/4ths of the way thru the pic.

El, I'm counting on you to give us the animated GIF version of this great scene!

Will Sonnet....help me, I'm drawing a blank.

To Have and Have Not, wonderful.

And Mayo has a very old-fashioned sort of beauty--you'd never see her features anywhere near leading lady material in this day and age. Her smallish eyes under that very heavy "sausage" of orbicularis occuli, her small mouth, her kinda long upper lip...funny how beauty standards change, not always for the best!

The Guns Of Will Sonnet