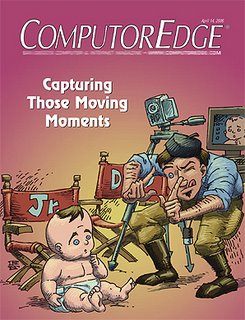 This is my latest computor edge cover... and the editors added pupils to my characters! They've ruined the wide eyed innocence of the characters with their little pen point pupils! Now they look drugged or crazed! They should have told me they wanted the eyes changed... I would have been happy to do it. I liked this cover and it's a shame that its been messed with. Sigh.
Posted by MrGoodson2 at 5:19 AM

Hey, I saw this cover just the other day, Rick. Nice job!

I can understand how you wouldn't want anyone messing with your work, even in so small a way. That's too bad. I would have preferred the blank eyes look too.

Who the hell is this guy? Computeredge?

Rick, as long as we're here, I want to say that I have been faithfully following your new sci-fi strip "Tux" on your other blog. Hope you don't mind some feedback from one of your most faithful fans.

There's action a'plenty in the strip, but as yet I'm a little uncertain who to root for. That's because in the first scene, Tux is shown buying two slaves. She's a slavemaster, which doesn't immediately elicit my sympathies, plus she's a crook to boot. I assume she has some hidden, noble purpose for her actions, but we don't know what it is yet.

Right now my greatest sympathies are with the reptile, Jackmike, who is strong, brave, disrespectful of his master's authority, and clearly a victim in all of this. But I don't think he is meant to be the main protagonist.

Just my totally subjective opinion thats it's time to clue us in a little more on Tux's motives, and the overall direction the strip is headed. I would be drawn into the action a little more.

One great thing with the Dr. Ocular strip was that I identified with her situation from the very beginning. She's just graduated from college with a degree. Now what? She needs a job.

That's my two cents. Great strip though! Looking forward to more installments! Anyone else following it? What do others think?

Interesting you brought this up. I've actually recently been considering doing a cover for them (thought it would be a fun side project). So this is good info to know. Thanks.

Ack, I thought I was making a funny at RICK RANDOLF's expense. It was too coincidental that he just sent me a letter last night and then a ComputorEdge cover showed up as a post the next day. Sorry if I caused consternation Rick.

Mr. G:
There are 3 Ricks who do covers for CE, so I take no offence.

Tom M.:
I'm overjoyed to read that you have been following my strip. I wasn't entirely sure if anyone was reading it!

Your point is well taken. It's something I've fretted about for a while, but I was having too much darn fun with all the action to let it get the better of me. Never fear, though, because gears are about to shift.

In fact, tonight's entry is sort of the end of the 1st chapter of the story. There are some revelations that are about to take place that I think you will like. Originally they were to take place while the crew was still on the ground, but I felt that I needed to inject a lot of action into the story before going on with more exposition. Now that I've got that bit of action out of my system, I'm set to introduce the main objective of the group.

I'm very glad to hear that you like Jackmike. He's swiftly becoming my favorite character as well. Stick with me because I’ve got all sorts of crazy ideas of where this is going to go.

PS... I don't think that CE makes a habit of changing the cover art... this is the first time I've noticed at least.

Rick you should post the original drawing so we can see the good stuff!!!