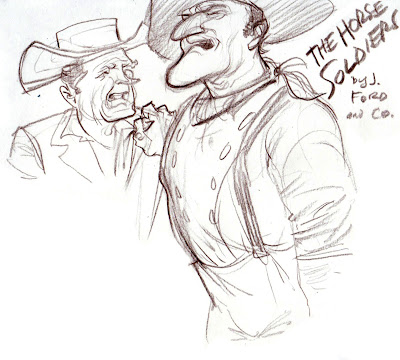 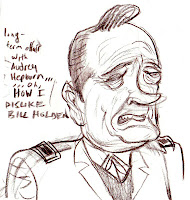 An unsatisfying movie. John Wayne vs. William Holden... no contest, really, tho' the script gives a healthy heaping of the self-righteousness to ol' Bill.

There's meat to the conflicting sensibilities of the two characters--in eleven years it will blossom into a movie like M*A*S*H--but having raised the big issues, director Ford and co. never really seem up for a resolution. And besides--Bill Holden just comes across as such an a--hole.

I've tried to watch this film three times, and never make it to the end.

They had that rickety old actor who looks like a Quaker Col. Sanders in there as a Confederate constable about to be hung by no account deserter Strother Martin. 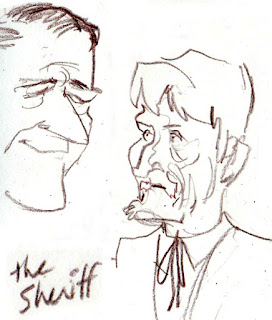 Not only does the Duke rescue him, he restores his dignity. And knocks out Martin with one calf-skin sock. More of that!
Posted by MrGoodson2 at 2:25 PM

Audrey and Bill were an item? Didn't knwo that. They should have had beautiful long necked kids.

The Duke is great. That needs labeling a=so it starts showing up on google on John Wayne searchs.

The much better Ford movie using the same sort of dynamics as the Henry Fonda Fort Apache. But the Duke is kind of being Henry Fonda. Too by the book and obsessed.