In July I drove down to Oakland to see a museum retrospective of Daniel Clowes work. Such an impressive show--he's my favorite comic artist, so I was bound to enjoy it. But beyond the great art (and there was plenty), the museum really out-did themself (themselves? theirselves?) with the exhibition space. 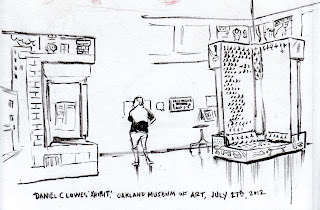 Lots of fancy touches like enlarging exemplary panels and pasting them around the upper border of the walls. Two monumental structures anchored the floor space--they were painted dark gray and decorated with street scenes from Clowes' comic world. These background drawings weren't ainted on--they were carved into the surface. One even had a quilted crash pad kind of seating for folks to stretch out and relax.

As I wandered the exhibition, who should show up but the artist hisself. He was walking Chris Ware (his pal) through the show. Tho' a dozen or so folk filled the gallery, no one recognized them as they made their way along the walls.

I was desperate to listen in, but didn't want to harass them. So I held station at the front of the room where I was sketching, and watched them orbit back my way. Seeing these two icons of contemporary art comics confabbing, I knew I had to attempt a sketch. What glory for my Brushpen Breakfast site! What a scoop! I started to scribble...

...but the pressure got to me. The drawing below is a post-facto reconstruction. 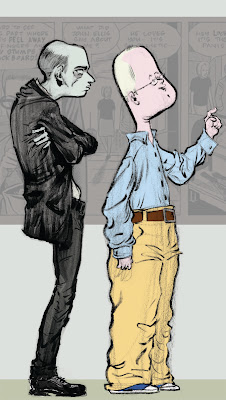 Later the two sat down in the museum auditorium and talked about their work. The line to get in was almost Comic-Con long--too many people for us all to get in. Fortunately, I was the LAST PERSON ADMITTED. Phew. Would have been a bummer to drive down from Portland and not see the talk.

But the talk was hampered by a discussion leader (the head curator) who knew little about Clowes work..and of course the ubiquitous audience questions that were all pretty lame (not that I had better!). Mainly Clowes tried to set the curator right on his lack of knowledge, and Ware kept telling the audience how incredible Clowes is (an endearing thing). During the whole event, Clowes came across like some kind of grizzled diplomat, or even a retired CIA agent: someone who'd seen it all, and lived to tell about it. 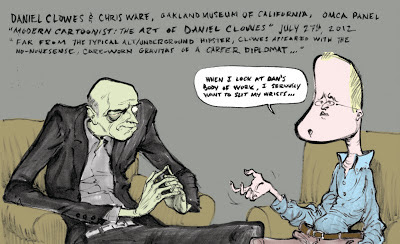 Wow. Great post Marty. I remember going to a comic con panel with you where Clowes spoke. That was a sane size crowd. So it was some time ago.
There's been some sort of Nerd baby boom. That's the only explanation.

I like the extra photoshop touchs of compositing. Still subtle and doesn't distract from the cool line art.

I want to watch Ghost World again. I demand that it make its way to Netflix Instant.

Marty, while the museum may have outdone themselves with the exhibition space, YOU have outdone yourself with this blog entry.

Thank you for bringing this episode to life for us in such a cool way … I feel like I've just watched an episode of the Simpsons! Only much better drawn.