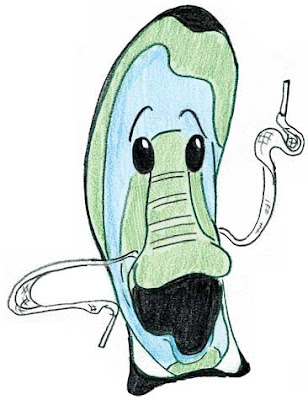 A palate cleanser from all the good art. An attempt to incorporate cartoons into my work at Road Runner Sports, years and years ago.
Posted by MrGoodson2 at 7:38 PM

I would be afraid to put my foot in that shoe. It would like it too much.
Was photoshop even invented when you did this art?

This was done in 1992 ish. Prior to Apple's experiment in licensing the operating system to Power Computers.
I was so proud of myself for making the shoelace eyes the eyes that didn't even think of the tongue.

Well, noses, eyes, tongues; those are just body parts. It doesn't really matter as long as he has sole.