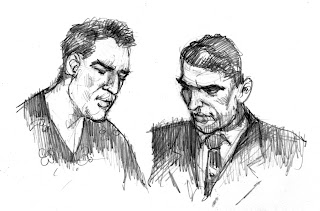 Lancaster and Reeves
Posted by MrGoodson2 at 11:42 PM

I really like this drawing of the two guys. I'm sorry to say I didn't recognize them at first but can see their features now. Wasn't this scene redone replacing George Reeves?

No. George made it. In fact this scene is depicted in the Superman bio pic. Hollywoodland. Even though he was feeling good, acting opposite Burt, he was catching snickers about his Superman popularity. Discovering he had an anchor around his neck as an actor from that point on. It doesn't look like George. I'm going to take another swing and simplify it.

The scene in Hollywoodland actually plays out with Reeves going to the From Here To Eternity premiere and when he comes on screen, people in the audience snicker and talk to the screen. He knows he's jumped the shark as an actor at that point.

You're post of Adam West singing on the Milton Berle Show was fantastic. He was so cool... and so out there at the same time.

I posted that? Maybe I shared it. Sometimes I barely note cool stuff that I share.

Hey. What happened to your preliminary storytelling work?

I couldn't see a way forward with it.

I really want to draw this one--just been busy.

p.s. Ellis, I take exception to your use here of the phrase "Jumped the Shark" with G. Reeves--he didn't take the Superman role in a moment of career self-parody/desperation, did he? I think he just didn't realize the near-nuclear power of TV to brand him as one partic. character from there...to eternity!
(I mean, don't you think?)

Marty, have you seen Hollywoodland? You're right that no one at that time knew the power of TV to type an actor. I remember the era of the 60s into the 70s where Big Actors didn't do TV. They didn't want any of that lesser medium tainting them.
The timeline on Superman was interesting. It was going to be a One Off. Then it ended up being the only thing he had. Hollywoodland plays Rashomon with how he got the bullet in his head.

The big trick on getting a lot of comments on your posts is to make them yourself.