When I read that Murphy Anderson died I first thought of this series. I don't know why. But his name was tied in my mind to these characters. No where mentioned in all the RIP notes on his death.
And I couldn't remember the actual name of the characters. Took me some effort to google it. Several false paths. One thing I didn't remember until I found this page- They rode on giant Dalmatian dogs!
There were only 15 stories. I bet I read at least half of them. 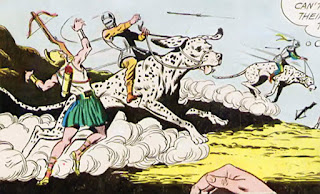 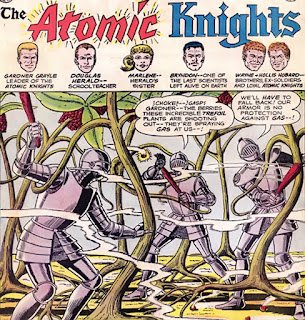 I've got the book with the collected Atomic Knights stories. I never read the giant Dalmatian stories, but when I looked them up I noticed the first issue with them in it was March, 1962. Then I looked up Disney's 101 Dalmatians. That came out in January, 1961 and was based on the 1956 novel of the same name. Funny.

Yes. Everything is swimming in the gestalt of era. Fins on helmets, spacesuits with fishbowl helmets. Sensitivity to proper placement in an era gives you a Glenn Barr.

Now I can't think of the swinging future space detective with the alien, receptionist girlfriend. Her head was shaped like a big angel food cake and her body was ribbon-like.
I've done a lot of googling. Can't find him and ger. It's not space cabbie. I don't think so anyway.

I think I had this problem before. And when we did turn up the character, it turned out the artist was this notorious lech, known for propositioning every woman that he saw.

Star Hawkins and Ilda. Ilda was the robot receptionist
I think I remember you did ask about that series before:
https://en.wikipedia.org/wiki/Star_Hawkins

You're saying Mike Sekowsky was a lech?

Ilda is not what I described. I think the aliens I'm thinking of were done by Russ Manning in some SciFi boys tale. Might have been for Gold Key. But might also have been Boys Life.

The wiki on Sekowsky has some stuff that doesn't sound too lecherous. I don't know where I got the impression. He certainly did a lot of art that reached me.

The aliens I'm thinking of had Gumby like legs and arms and heads shaped like the B9 robot's headpiece.