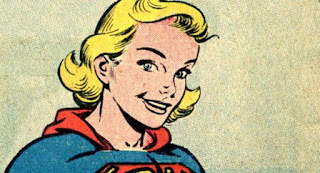 Last night's Supergirl premier hit every plot point Man of Steel did, except did it as entertainment. First superhero TV show premier that just got to it, she saved a plane before the opening credits were completed. I hope the super secret government laboratory doesn't become the high-tech hall of exposition like in Flash and Arrow. Interesting that DC doesn't mind Supergirl as competition to Gotham. Calista Flockhart should be funny, with the old Lois Lane role, of not being able to see past a pair of glasses.

All the TV I watch is superhero, or angry, sociopathic, black women (Shonda Rhimes), the former being some sort of vindication, I guess.
Posted by MrGoodson2 at 5:13 AM

I need to see it. I wonder if it is instantly on Netflix streaming.

Sterling Gates that wrote a lot of the first season is part of the Oklahoma comic creators FB group. Former Okie. Lives in LA now.

It looks like fun. I want to see it, but I don't think it will be coming my way soon.

I mostly enjoyed just seeing Supergirl flash into action, especially since with special effects these days it can be so immersive. There's something irresistible about a superhero risking their life to rescue people. I love the old Max Fleischer Superman cartoons for that reason, so simple, so primal.

Other than that,I thought they copied the whole Superman setup a little too much, and I cringed at a lot of the dialogue. So far I think Green Arrow has been the best of the lot. I haven't watched a full episode of Gotham yet. Flash isn't bad, but his costume... well, full red body suit is hard to pull off.

But heck, these shows are meant to appeal to the childish side, so I don't want to be too critical.

Already watched it 4 times. It's fun (Even more than the Flash which I really like). By dumping all that DARK and Gloomy crap this series shows that an optimistic superhero in the light works too. The lead actress Melissa Benoist really makes you care about Kara's plight. I just hope that they don't get too involved in the "Phantom Zone" rabbit hole sub plot as a crutch as the movies and Smallville did. Kind of Phantom Zoned out. But overall this show just gets to it and doesn't meander around with the junk. Look forward to future episodes.