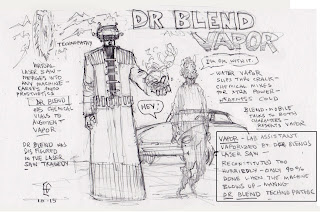 My contribution to Instant Sidekicks. An event at Speeding Bullet Comics in Norman, OK.
The thrill is making something from randomness.
Might be fun to do a 24 hour comic from something like this.
Text from my Tumblr Post
“While working with a laser saw that demolishes material as it spins, Lab Assistant, Rodney Vapid, blunders into its path and disintegrates. Working feverishly, Dr Blend has Vapor 90 percent reconstituted when the machine explodes, mangling the Dr’s body but giving him Technopathic powers. Vapor and Blend with the artificially intelligent, talking, Sunbeam roadster, fight for right and avenge the wronged.”
Below-Doodles before I had an idea. I was going to make a robot with an octopus for a head. 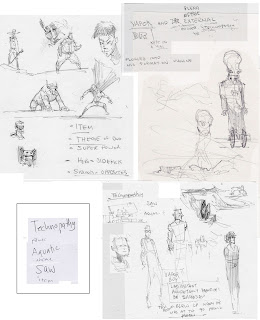 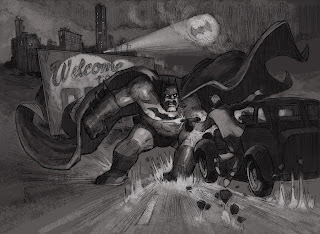 Adding tone. I'll try and finish this tomorrow. The plan is to make prints and sell them at OAFCon. 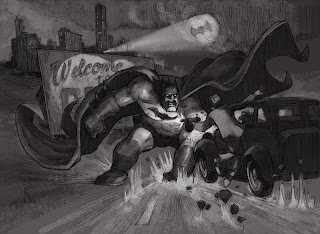 now you can animate from this to the rough. See that I didn't change much. I was afraid to change it. Everyone liked the first pass so much.
Here it is enormous. As a file I'm giving to the printer
http://ellisgoodson.com/transfer/Bat-Hulk-Pencil-Finish-tone2.jpg Wanted to give this an URL.
When I post it as in Tumble for Inktober it will be line and wash only. 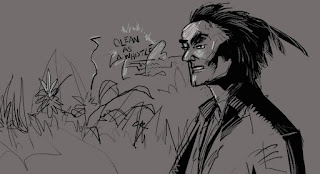 Kyle of Kyle's brushes has a youtube channel where he was showing off a brush that he claimed would rival the best in Manga Studio. I'm sure I already had it, I've bought every thing he offers. But I didn't want to sample each brush and still not be sure I was using the 'ultimate.'
I wrote him an email reply to one of his solicitation emails- 5 minutes later he told me the name of the brush.
CLEAN AS A WHISTLE is the name.
The art here is just bad doodling. But the line and how it comes out is pure joy.
I'll do something worthwhile with it soon.

I love getting these views inside your head, and I'd love to see what ever you'd come up with for a 24 hour comic.

Thanks Rick and Tom. We had about an hour. It was fun. But nothing gets as fun as the random drawing for power, etc. And realizing you got some real duds on your hands to try and coalesce into something cool. If I were to delve back into this, the Dr Blend helmet would get bigger, cooler. Lots of stuff would be changed with a new pass.

As always, your super-villians are dang funny and begging for a story appearance. They conjure a fantasy Silver Age past, where those odd-ball DC villains get mashed-up with a more Marvel-style energy.

Back onto Ventriloquism thumbnails tomorrow. Got Bat Hulk for OAFCON out of the way.

I made Bat-Hulk my new desktop.

Thanks Tom. Having too much fun with these Kyle Brush presets. 14 bucks. I plan on doing some 'painting' now that I have some proper tools.