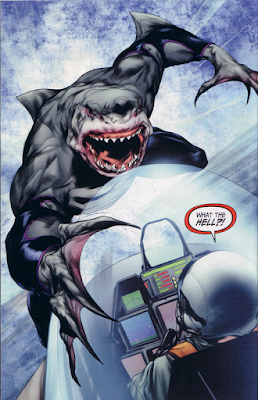 He doesn't look as big in the illustration. I like him not so large. In googling the character I notice that he's had several looks. I kind of like the hammerhead versions of him.

CGI looks good. I'll have to force myself to watch a couple of these.

Well, according to the producers. We won't be seeing him again. CGI to do a full episode with this character is too costly for their budget. They went into the hole just for the few minutes they did just for the fans. If they get more money....then anything could happen.

Interesting. So they explain who he is and then it's "I hope we never see that guy again."

No....comic books geeks get it. No backstory other than he's King Shark from Earth 2 sent by ZOOM to kill Flash of Earth 1

Just like a few weeks back Atom Smasher came from Earth 2 as a thug for Zoom.