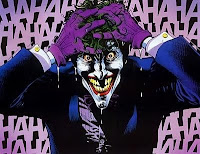 From an online National Geographic article:

"Thousands of years before the Joker gassed comic book victims into a grinning death, Phoenician colonists on the island of Sardinia (map) were forcing smiles on the faces of the dead.
Now scientists say they know just how the ancient seafaring traders created the gruesome smiles some 2,800 years ago—not with a toxic gas like Batman's nemesis but with a plant-based potion.
By the eighth century B.C., Homer had coined the term 'sardonic grin'—'sardonic' having its roots in 'Sardinia'—in writings referring to the island's ritual killings via grimace-inducing potion.
http://news.nationalgeographic.com/news/2009/06/090602-smiling-death-potion.html
Posted by MrGoodson2 at 5:41 PM

"Elderly people who could no longer care for themselves and criminals 'were intoxicated with the sardonic herb and then killed by dropping from a high rock or by beating to death,' according to the new study.

For centuries the herb's identity has been a mystery, but study leader Giovanni Appendino and colleagues say they have discovered a sardonic grin-inducing compound in a plant called hemlock water-dropwort.

The white-flowered plant grows on celery-like stalks along ponds and rivers on the island, now part of Italy."

High Rock Health Care. Has a ring to it.
Cool article Tom.
I've discovered all the cool ideas like this one have been done by the Greek Classics. I'm reading a library copy of Edith Hamilton's MYTHOLOGY. When I'm done I'll buy my own to mark up and highlight.