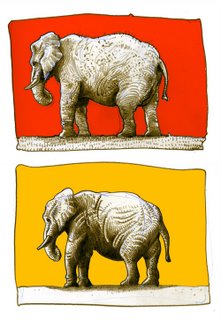 It's just two elephants... or the same elephant twice. When Rick was visiting, his daughter Denise one day out of the blue, started telling me the tale of the six blind men and the elephant, and then went on to explain the moral of the tale. So I've had elephants on the mind since then.

Hey, if anybody wants to read a really interesting, free online comic book on copyright law and fair use go here:

It's actually about fair use in documentaries, but it's relavent to all the visual arts. Months ago some of us were having a discussion of Marvel's lawsuit against City of Heroes and what the true goal of copyright protection should be. I think that point is covered eloquently here.
Posted by MrGoodson2 at 6:01 PM

They are grand... they remind me of Durer's Rhino. I'll let you know what Denise thinks when see gets a look (the kids are off to bed right now).

Lovely! Are they EXACTLY the same? I see some differences! It's like the "find the differences" game.

Denise says "Cool. Those are really good elephants. Will you teach me to draw them sometime?"

Evidently I wouldn't be able to do that for her. ;)

Thanks for that legal link. I've going to read that when I get home. I like the texture on the elephants and how you have different gesture in the poses based on the texture depiction.