Blair and I spent the last two nights watching the first two "Worricker" films from PBS. All-star cast headed by Bill Nighy. Tonight was "Turks and Caicos," the second film. The first one was called "Page Eight" and Blair calls it her favorite film of the year. 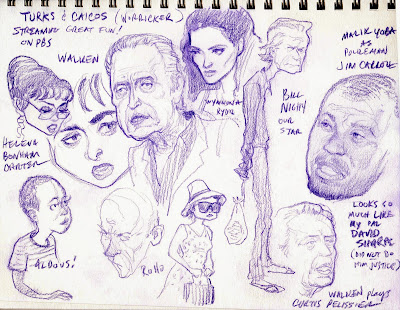 Third and final one airs the 16th on yr local PBS affiliate. Highly reccommended.
Posted by MrGoodson2 at 9:55 PM

Oh, and I think the drawing is great! I'm a fan of Bill Nighy, fer sure.

Those are great studies. I'm glad you scan in color. My scanner works faster doing grayscale so that is default for the way I scan.
Love that I saw these faces and knew without being told I was looking at Walken and Ryder. I'm going to grab as much Jack Larson/ Jimmy Olson scene chewing off the web as I can this morning. Even if I can't touch that super power for likenesses that you have.

I'll look for Worricker. I discovered a video watchdog blog I'll post a link to eventually. While looking for Jimmy Olson ref.

Rick, the Worricker films are a trilogy of espionage thrillers. Bill Nighy plays a British Intelligence expert who falls out with his superior(s) and Prime Minister over seceret info...but it's much more a character study and display of great acting. Superbly intelligent (there's no gunplay) and at the same time very gripping. That describes the first film, "Page Eight"; the second film (the one I've drawn) has Nighy on the run in the Caribbean--where he jousts with Walken, Wynnona Ryder, et al. Really enjoyable stuff. One of those very rare pictures that doesn't strain incredulity for the sake of moving their characters thru hoops toward plot goals....

THe third (and final?) film airs the 16th on PBS--you can stream it for free!!

Oh, that sounds really cool. I will look into it!

I read a couple of the Smiley books. The author was a bit of a spook so it has that same mundane reality to the spy biz you probably like about Worricker. And I am interested as well. I'm a fan of the good spook story. Ala Ipcress File.