Check out this super-cool artwork I had done for Tom Moon's b-day: 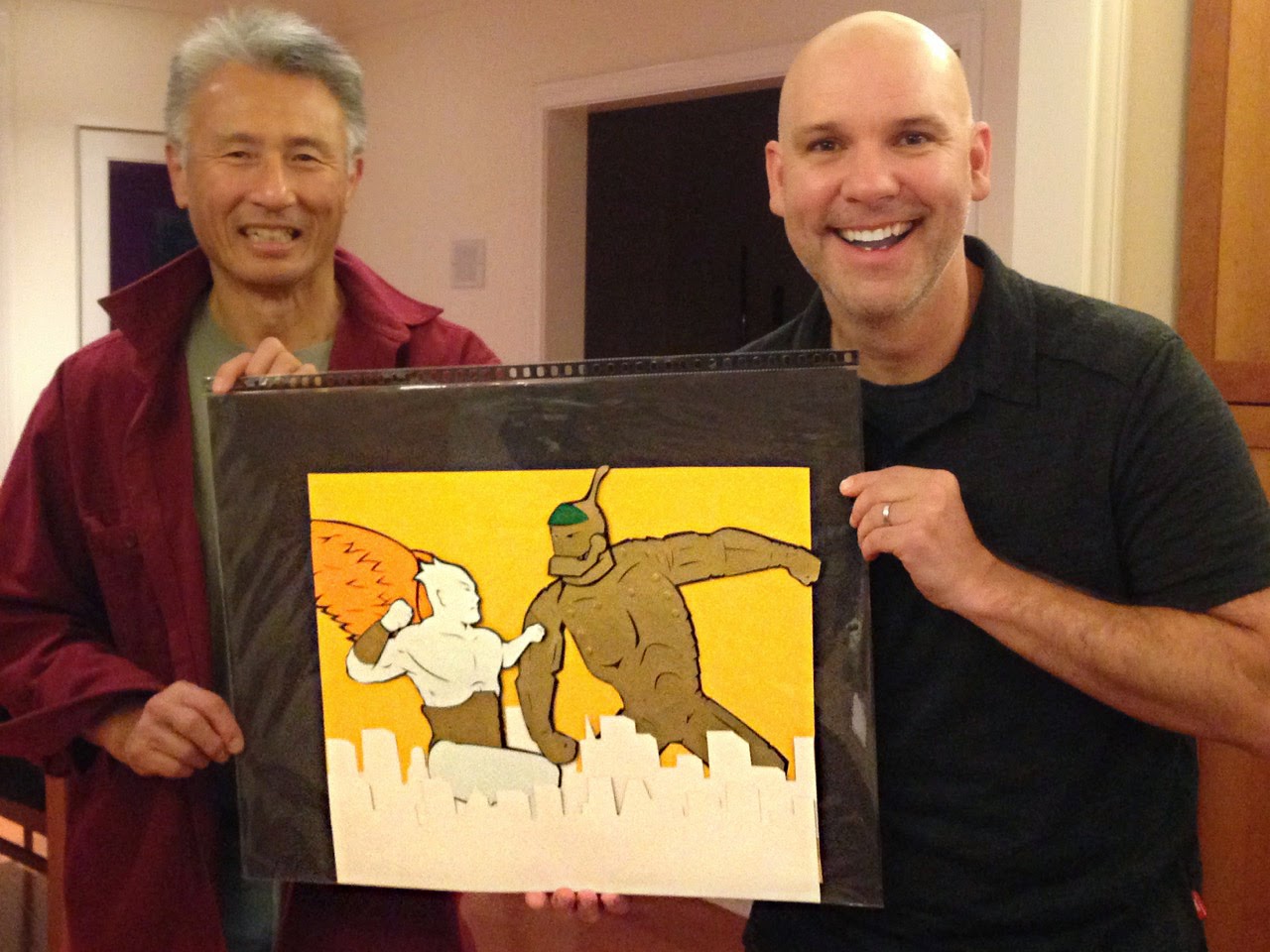 Tom, you will have to post a proper close-up of the piece.

It is a large semi-dimensional cut-out of Tom's Raymond and the Giant Robot characters. The artist  even added two extra vignette portraits that can be attached to the larger piece! 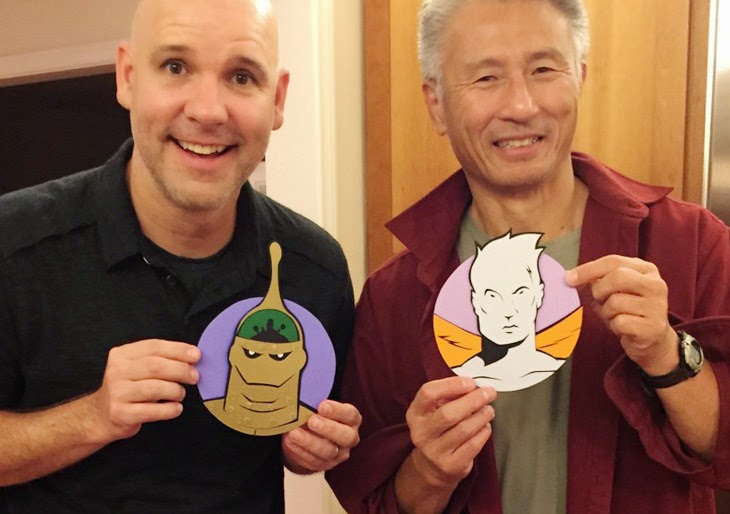 Tom sez:
Here are some close-ups of the pieces.
This guy does my characters better than I do my characters!
Have to hire him for future issues. 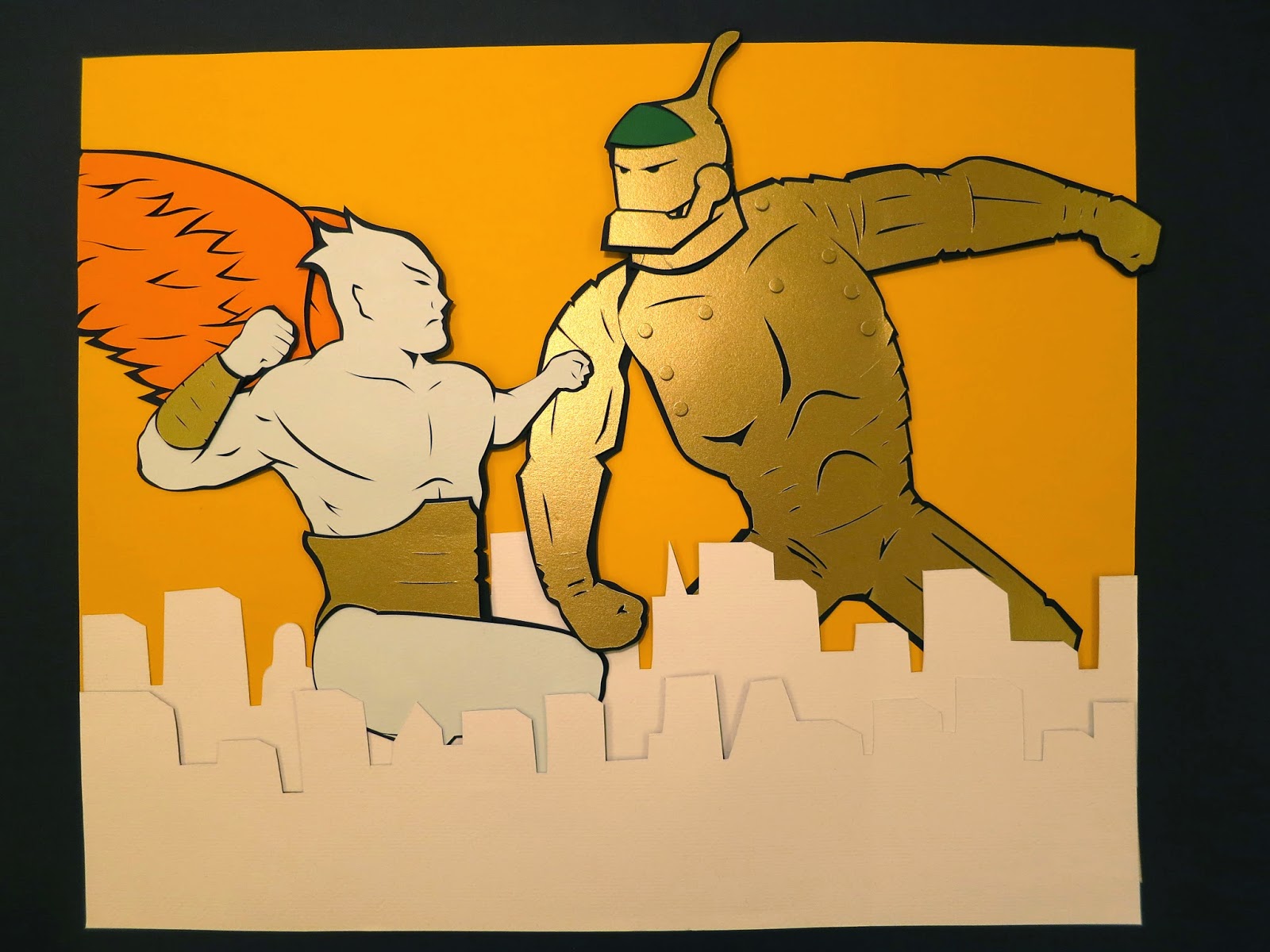 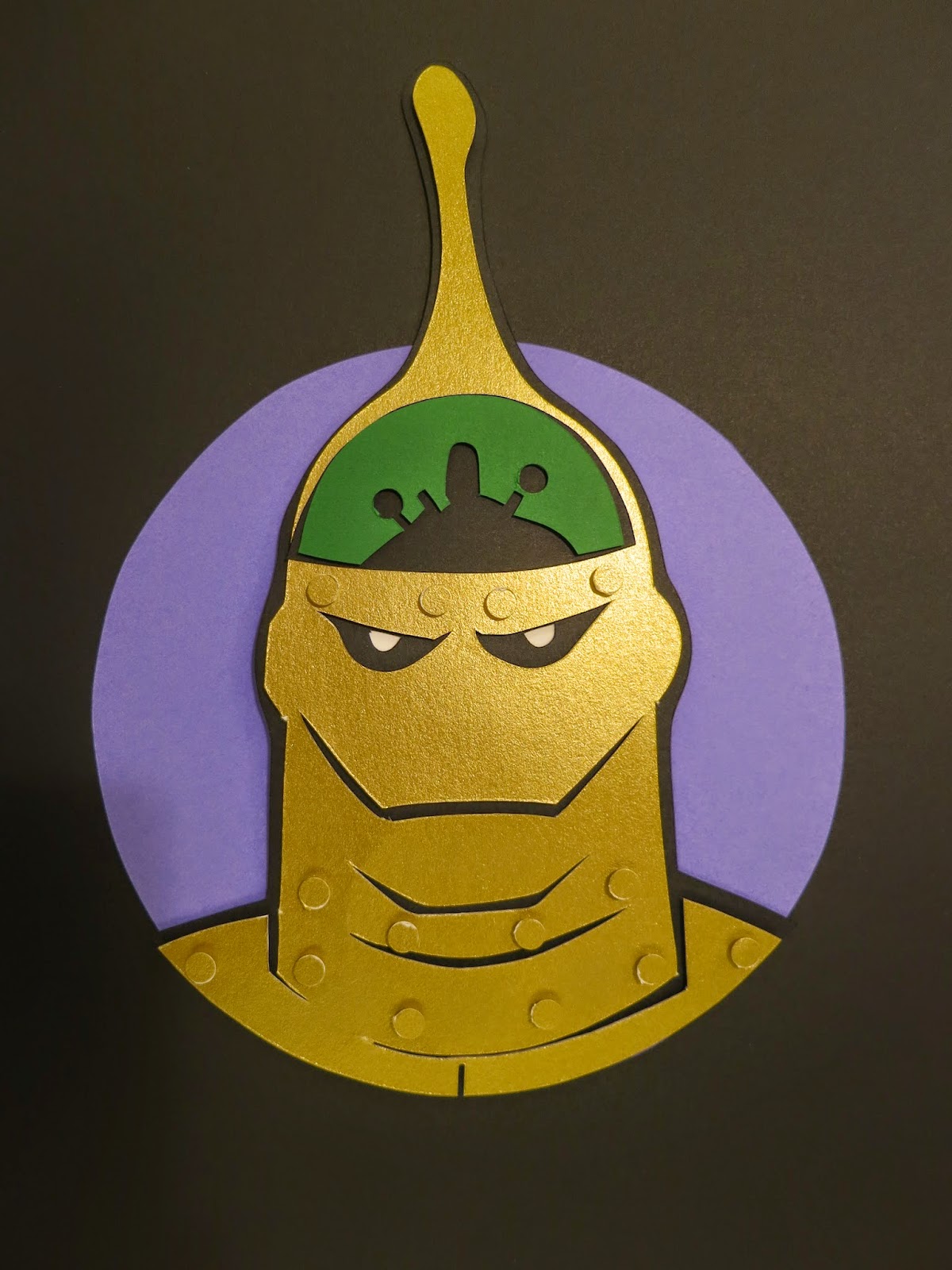 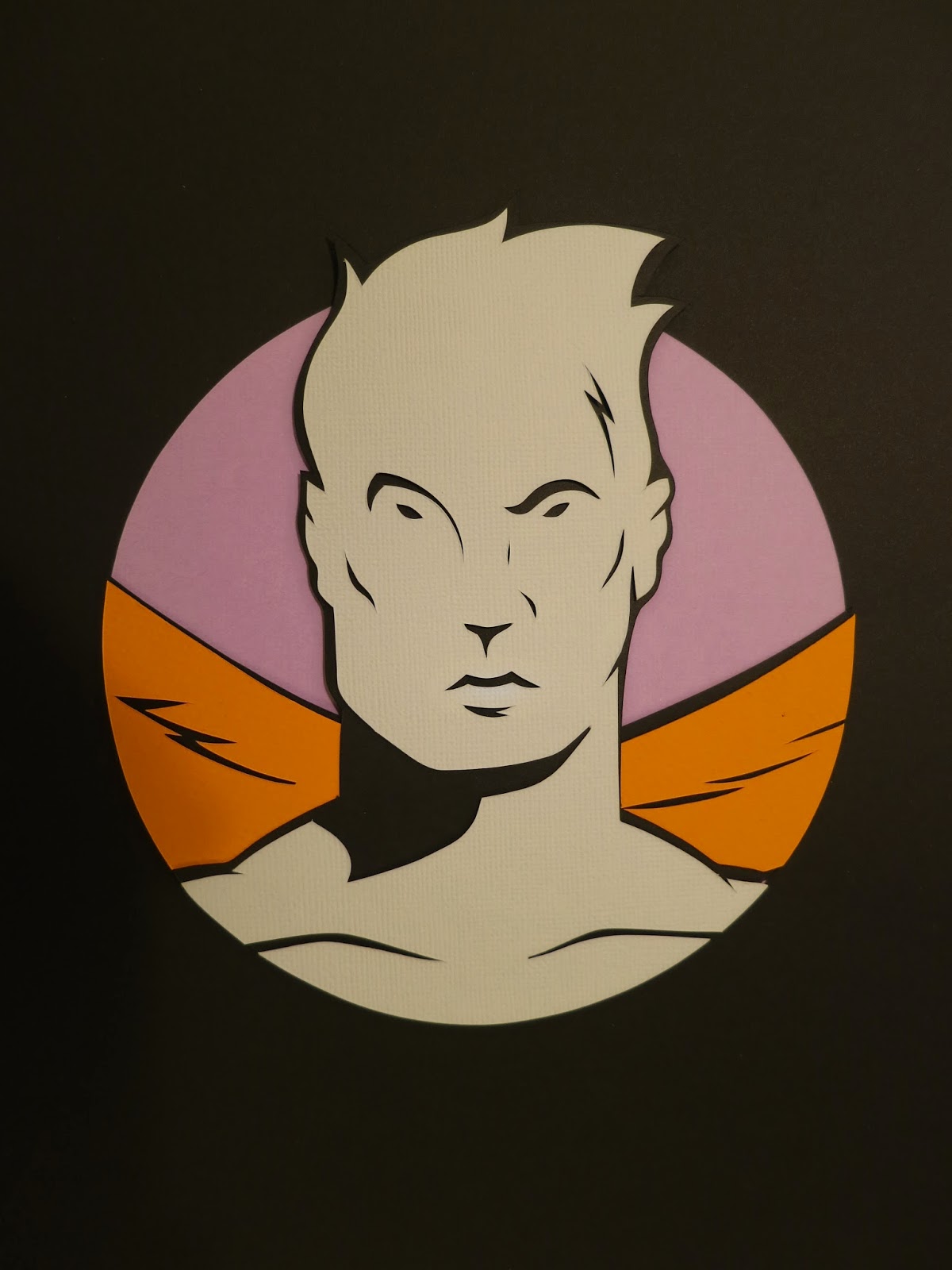 There's so much amazing going on here, let me try to run thru it all....

First off--how wild that the artist, Nat Goldblatt, created a Raymond THAT LOOKS LIKE TOM?! Tom and Patty remarked on this first thing, and asked if I'd deliberately set the artist out to do this--I hadn't! I don't even know if Nat knows Tom is of Korean heritage--I will be emailing him to find out. But I'm glad that #1 I'm not the only one who sees a resemblance, #2 the Moons weren't offended!

But more than the scintillating resemblance, you might be wondering how all this came about?

Remember those Inhumans drawings I'd been posting over the last year or so? Not the most recent one, but the others? I'd also posted them to the mighty Tumblr, where they were picked up by a terrific page called "The Inhumans Forever" (check it out--the proprietor Nat simply posts all kinds of great Inhumans art--including some from yrs truly). When I saw that I'd been "re-blogged," I emailed the proprietor of the site to thank him. He said he dug my work, and pointed me to another site of his where he posts his own artwork. He added that if I ever wanted to swap some art, he'd love to oblige.

So I checked his site out. It's HERE. I particularly love his recent Adam West Batman--you will laff, laff, laff!

Turns out he does amazing cut-out art. Mainly of recognizable characters from comic books and pop culture. Well, I loved his stuff. And looking at his work, (boy, is he prolific!!), an idea formed--wouldn't it be cool to see his take on some of Tom Moon's incredible characters?

But I was hesitant--maybe he wouldn't be too jazzed about the effort required to research unfamiliar characters--and then, what if he did a bad job, (didn't seem possible, but you never know...)??  And then again, however well they turned out, Tom might be mortified to see his special creations defiled by the hand of an unknown artist--and before he'd even had a chance to publish a single comic! Or maybe he'd just be annoyed that I had arrogantly taken it upon myself to share his own characters with someone outside the TAG circle--without his permission??

So I chickened out and asked Nat for a small cut-out of Stardust, the strange Golden Age hero by idiot savant artist Fletcher Hanks (a character and artist who I knew Tom loved).

(Tom, go ahead and post a photo of the great Fletcher Hanks cut-out Nat did right HERE) 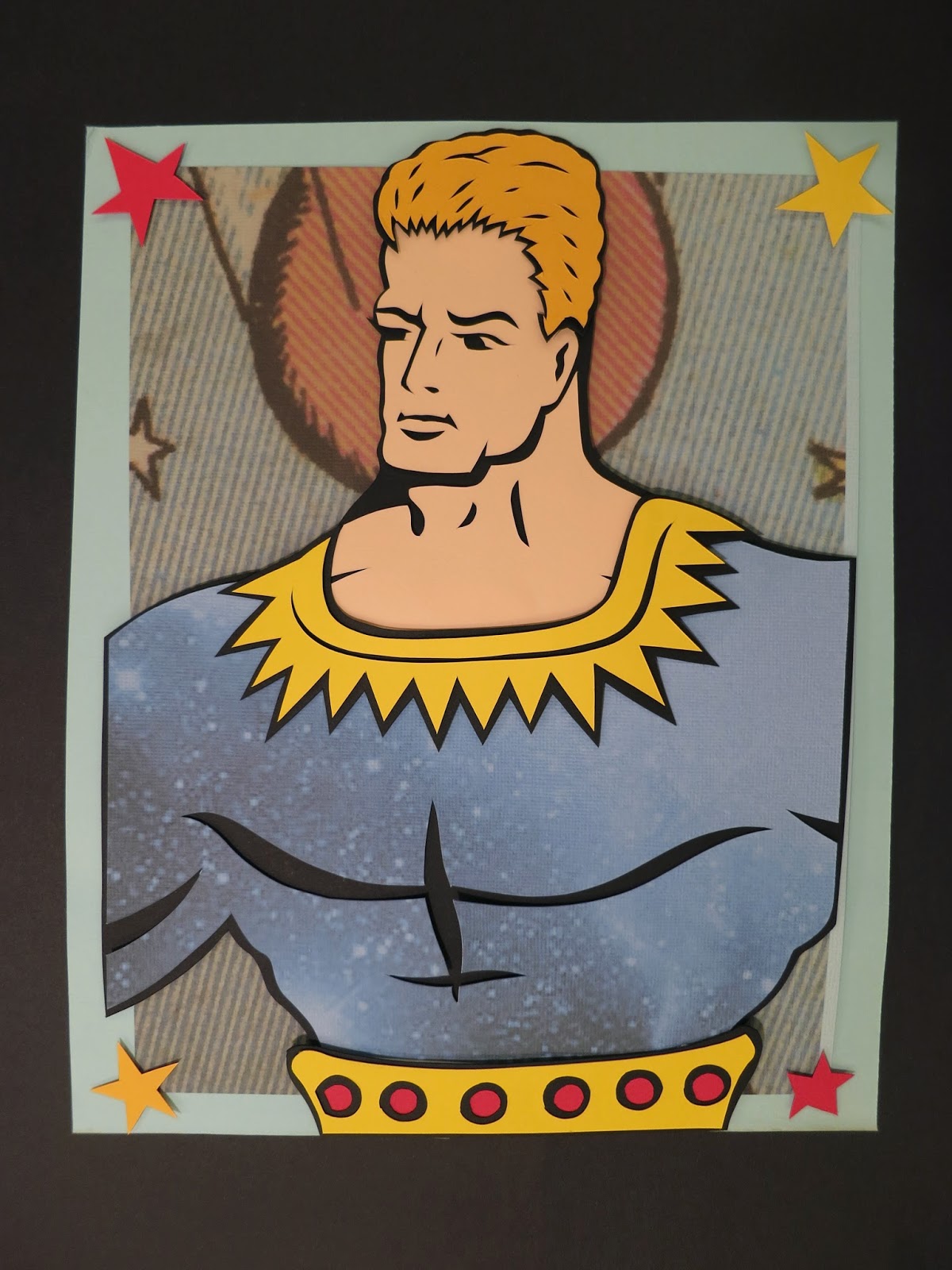 But even after I'd sent the email request to Nat for this safe choice (wonderful as I knew it would turn out--and I wasn't disappointed, as you will see once Tom posts a pic), I kept thinking how great Tom's own characters would look in this cut-out format.

So I broke down and asked Nat if he could do this one, too--just a little something, nothing too elaborate. Maybe 9" x 12", tops (I figured much smallerl might be more difficult when it came to manipulating the scissors?). Just whatever the characters and story inspired in him--but preferably the two of them fighting. And I insisted that I pay. But Nat refused payment, and asked that instead of paying him, I make a donation to Chicago's Cancer Research Foundation. How's that for an amazingly selfless referral??

Well, it only took Nat a few days to do BOTH cut-outs--this in addition to his full-time job (!) as a psychologist (!). But it took the package well over a week to get here...I was on pins and needles. When it arrived, what I found on our doorstep was a HUGE dbl-reinforced cardboard flat. I was shocked. When I opened it I was thrilled--thrilled to see how fantastically well Nat had rendered everyone--and shocked to see how elaborate and large it all was.

He emailed and said, yeah, he got a little carried away, don't sweat it.

(And not only did Nat go above and beyond with his quite brilliant rendition of Tom's characters, and the brilliant Stardust, but he also included three ADDITIONAL cut-outs that he said he had laying around the studio and that he thought I would like--one of 'em was a sexy Vampirella that I sent to Jimmy for Halloween. Amazing!)

So in the spirit of reciprocity, I inked an Inhumans drawing for Nat (the one from a few weeks ago) and mailed it off. But it wasn't until last night that Tom and I were able to get together (he was out of town for a while). NOW that we've finally gotten the art into Tom's hands, I can finally post these images and tell the tale.

And thankfully, not only did Tom like the cut-outs, but so did his wife Patty--she said they have to go up on the wall. Phew!

You know, one of the few truths I've learned in this life is, it's always worth it to commission a piece of artwork. If it's at all possible financially, you'll never regret it.
Posted by MrGoodson2 at 10:44 AM

The Adam West art is great. Pretty cool stuff. One lesson it teaches, when your line art is cut out, it becomes super clean. Like the photoshop filter - cutout- The big shapes are clean big shapes. Very appealing and pleasing.

Cool that you supported this talented guys passion. I'm sure he loved getting the commission. He probably feels 100 percent more appreciated as an artist. You're good that way Marty.

And as far as the character looking like Tom. Yes. Especially the hair. White and sticks up.

Thanks again Marty and Blair for the wonderful present!

!!!
Love it! Thanks for posting the pix, Tom--and so glad you got a kick out of the whole escapade!

This is all too cool for words. Thanks for sharing this, gents. SO MUCH FUN here!