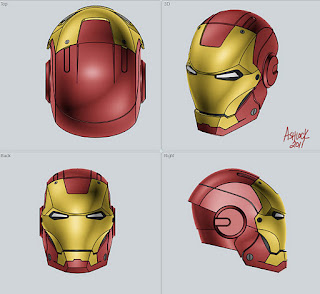 The Avengers trailer that hit this week inspired me to dust-off something I started last winter, but abandoned after work and other events took priority. Here's Tony Stark's helmet from the first Iron Man movie, modeled in the best hard-surface modeling software on the planet, MoI3D. Actually, the helmet is based more on the concept art by Phil Saunders than the finished sculpt by Miles Teves that became the Stan Winston Studios prop used in the movie. I'm still not happy with how the cheeks of the gold face-plate don't flow into the rest of the head. I think I thought of the solution to that last night while I was sleeping. I'll update later on. Meanwhile, here's a render of the helmet I did in Modo using some of the preset materials and environment probes. 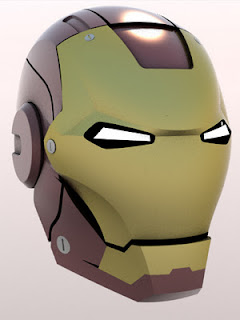 Wow! That's really good Ronnie. Really good flow. I browsed back just as I was about to make a comment. I realized it was the eyes that just slightly bumped me.Is the real deal that much a decal? Might be easier for animation if you have a little bit of uv territory that gets different shape decals for emotion

Did you know that Phil was a San Diego guy who cut his teeth on The Journeyman Project? I did some illustrations for that team and worked along side those guys for a short time. Great guys one and all! They've all gone on to great careers in the industry... I've run into a couple of those guys here an there over the years. Phil has has been living his dream for sure!

Good point on the eyes, Ellis. They are actually kind of floating there as I haven't really integrated the negative space (read: dark areas) in the the eye and mouth cavities) into the final helmet. There is supposed to be some kind of dark material that seals everything in, I guess, and rather than caulking the holes up, I shoved a dark, roughly head-like shape in the helmet to make things look watertight. I need to push the eye-LED slits back into the head and also find a material that has a white blue-glow and use a fall-off/post-process effect, because otherwise the eyes are going to pop too sharply.

Rick, that is cool that you know Phil. I have the art of Iron Man the movie book and his work is all over that. He really came up with some great designs. One thing I dig about the Iron Man movie armor is that both he and Adi Granov put a ton of thought into making the armor cool, iconic, and plausible. There is a lot of subtle, but slick industrial design in the final product and rather than going all crazy with extraneous detail, every part of the armor looks like it serves a purpose - where form seemingly follows function.

Don't think yourself too cool Rick, I WORKED for two years at Presto Studios with Phil and I could CALL him at any time and he would TAKE my call. I have also TOUCHED his wife before (handshake, arm on the shoulder). I've even STOLEN a few items from his home (a pencil, carton of Bisquick). So don't get all name-dropping high and mighty until you know all the players you're up against. (Although I've never seen Phil naked like you have, you win that round.)
Cool work Ronnie!