DANGER 5- Click for Youtube video
Scott Morse said he wished he had done this. I wish I had done it too. Or at least played Hitler. 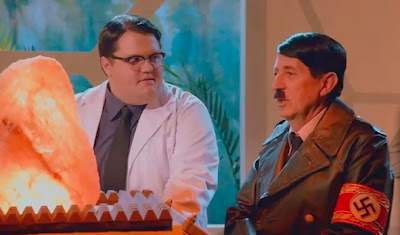 Even though the intent is to project solid cheezeball, it's obviously got a ton of money spent on it. Maybe more than would be spent on a conventional bit of storytelling. I think Batman in the 60s was considered too expensive for it's own good.
Posted by MrGoodson2 at 11:30 AM

My favorite part is when Hitler jumps through the window under a hail of bullets. Action Hitler.

It's a Youtube only series. Isn't that a fascinating way to distribute something as elaborate as this. The new VOD evolution. I want to make a couple of shorts.