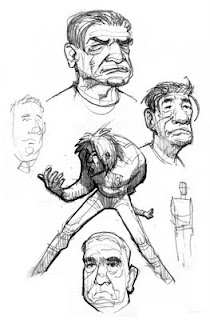 I'm going to do a Shemp series.
I was thinking the other day "What if I was a handsome devil like Ranjo or Davis? What doors would have opened for me that are instead firmly closed?"
I had these thoughts while watching some Shemp era Stooges. Here's Shemp with all this talent but he can realistically only be a Stooge. I've read enough about Shemp that I know he wanted to be more than a Stooge. Throwing Hollywood networking parties etc.
So the idea is to do some drawings with Shemp as Indiana Jones, Conan, James Bond etc.
Try to make them styling and finished for a change instead of my usual sketchiness.
Added by KZ. Shemp's last cigar.
http://www.cigaraficionado.com/Cigar/CA_Profiles/People_Profile/0,2540,64,00.html
Posted by MrGoodson2 at 2:05 PM

When I sat down at the computer today I said to myself, "when, if ever, will there be more blogs about Shemp, and artwork basking in the glory that is his face, and talent, dammit. Dammit ALL!"

Concur with Kali. Bring on the Shempfest.

Shemp was GREAT! I found this about his last cigar.

URL won't take. I put in in the post.

My favorite gag by Shemp was from the short Brideless Groom (1947)when Moe and Larry try to help him get spiffed up to find a wife (and claim $500,000), Shemp thinks he has cut off his head when his mirror gets flipped backward. Fixing the mirror, he cries with relief, "THERE I am…and pretty as a picture!" "Yea," Moe quickly replies, trying to hem his slacks, "of an APE!"
I always remember that gag as a kid and it makes me laugh every time.

Good read. I forget where I read so much about the Stooges. I think there was a web site called Me and Moe. Some fan site that was quite extensive.