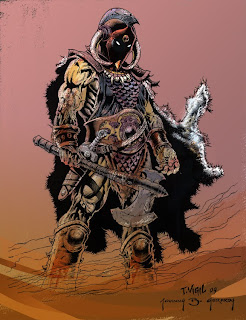 I think I fail hahaha.
Posted by MrGoodson2 at 3:56 PM

Fail? Nuh-uh Kali. I think that's a real nice coloring job. I like the spatter-y effect you have on some of the skin and clothes. Now I was thinking a doing a version where his armor and clothes were all different shades of pink. That would be a fail.

It's all about how it reads. I think yours reads best. Down to the clean decision to have bones and jewels and fur left white. It's contrast. If it doesn't have contrast in comics it's missing something..

No one who tries is a loser -- 'course that means I need to try myself, even though it's my challenge. If I don't the I AM the biggest loser. heh heh. I want to see Tom's Pink Barbarian ... Next year's Comic Con Giveaway at Artist's Alley.

It looks good. I like your color choices but not sure about the black "spots" in the upper left corner (maybe a different color.

I would also like to see Tom do a pink version, just for fun.

Here's some inspiration for your pink guy, Tom...

Thanks guys! I feel win now.