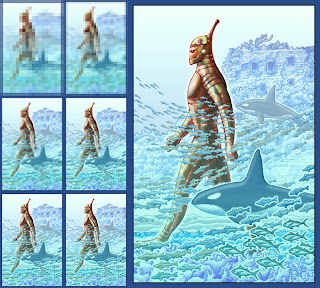 So since Ellis was the one to actually write the words "It's a robot underwater," I guess technically he wins, but I hope he will share his prize of a bowl of filth with Rick, who did the detective work. The funny part is that Rick so generously gave me credit for having the cunning to put a fake name on the picture file to throw everyone off, whereas the truth is that I just forgot everyone can see the file name if you know where to look. Some of the guesses were pretty darn amazing though, don't you think?

I was shocked by "It's Buncake, nude, next to the dolphin tank at SeaWorld" - so close!
And the robot DOES look like it has breasts by golly.
This is one drawing in a little story I'm working on.
Posted by MrGoodson2 at 2:05 AM

I love the Robot design. Or Robot transport. The whole fantasy thing of the robot with the marine life in lock step with him, stage left. The killer whales showing us the giant scale. I didn't notice at first that the top of the skull was a guy driving the robot.
Nice device keeping us interested with the higher rez versions. That third up rez was going to completely give it away.
This looks exciting and I hope you get the series done.

How the hell was I suppose to know it was a walking robot with killer whales! Looks awesome by the way. I see a Moebius influence in your style. Very cool.

The low rez versions are good reminders of Genesis art days when you might have had less colors to work with, the same resolution, and you had to sell the idea it WAS a robot and killer whales.

Awesome drawing as we have come to expect... enigmatic, unique color choices and well crafted. I was just like Ellis... I didn't see the driver until I had taken in the rest of the drawing several times.

Ellis, our Genesis days and challenges have been on my mind a lot lately. We not only needed to be artists, we had to be CLEVER artists!

I've come to realize how much I liked the old Genesis art look. Parallax scrolling was cool. I really think I'd like to do a 2D game with that same style, but utilizing the full power of today's computers to make the art really rich. Ten parallax layers!

You need to work at PopCap, Tom!

You've got a Dublin branch. Any chance you'll start one in San Diego?

Caustics? What are caustics?

Do you guys say "robit" or "robot"? I can't stand it when people say "robit" drives me mad. As mad as a Bruce!

I think I say Robot. But I mangle English in such a top to bottom way I can't trust my pronouncement.

This is a beautiful illustration Tom. Hope you will post more of these.

Kali, there are people that say robit?

Mad as a Bruce refers to Mad Men probably? Not Braveheart.

Gumbies? Wha? What am I missing?

Caustics are those light patterns at the bottom of the swimming pool. I think Twilight Zone started with some attempt at caustics. I thought this was shopworn game art nomenclature.

Kali, I think you meant Gumbies.
I'll have to check.

Tom, I don't know what I'm talking about either.

Oh I know. Gumbies vs Fishies.

Where's Pokey? Is he hiding behind the robit, or is he inside the command cupola with the driver ...?

Maybe. Wait! That doesn't make any sense either!! What's going on??? What the heck do gumbies have to do with fish? Why am I the last to know?????