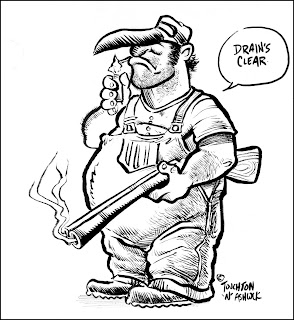 Taking a break from "Norbert and Billy," which I'll resume posting tomorrow. This is another comic strip my best friend in college, Josh Touchton, and I thought about doing. He was the idea guy/writer and I was going to be the artist. It was basically going to be a one-panel strip about a big dumb redneck named Tink and his white trash family. Josh has to have one of the most wicked senses of humor in the world and most of his ideas were lifted from everyday observations of the denizens of the small town in Arkansas where we went to school. I have to contact him see if he's up for more.

I drew this back in the mid-90's after I had discovered inking with a brush. Once I got the brush, I stopped using crow quills. It's hard to beat the organic character a Winsor& Newton series seven sable imparts on bristol. Anyhoo, enjoy. These are my people.
Posted by MrGoodson2 at 11:52 AM

This is terrific! I bet you could make a mint selling images like this on T-Shirts on Cafepress. Nicely drawn and a funny gag to boot.

Thanks, Rick. I think 'Tink,' if we find the right audience, would be a hit. There's no end to the source material, that's for sure. Did you make up to Seattle yet? Let me know if you need anything.