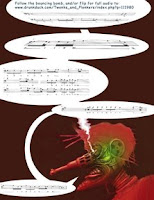 It was the last submission I made before the deadline closed, a comic book adaptation of the theatrical musical variety revue I'm finishing up right now. Here is the text that went with it:

This is primarily the story of six people, one disenfranchised Neo-Conservative with a gun for a nose, two steadfast women at opposite ends of the political spectrum, a three-headed general, a salsa-dancing terrorist, and a conflicted peacenik, all striving to validate their lives and work in the months leading up to the 2008 Presidential election.

The comic supports a musical stage revue called, amazingly, “I Survived The Bush Administration (And All I Got Was This #$%^&@ T-Shirt)”. The finished comic would include all of the revue’s comedy sketches and skits, as well as print versions of all eleven songs.

The playlist is comprised of the following songs:
-- The Road To Utopia
-- The Neo-Conservative Blues
-- Stomp The Constitution
-- The Terrorism Cha-Cha
-- Simple Solution
-- Bake
-- I Am Sorry
-- Just A Girl …
-- It Hurts When The Congress Thinks You’re Nuts
-- Going Forward

All songs will be referenced in the comic and will be available for readers to listen to on www.drunkduck.com.

ellis11@sbcglobal.netCongrats. When you look at the list it seems small compared to what I'm sure was massive response. Always qite an achievenment to get on the short list. But we're all short list kind of guys around here. The GunNose guy has gotten a lot more detail and saturation since I last saw him. Definitely an attention grabber.

ack, sorry about that. I was typing in my password, look up and nothing is in the field. Satrt over and then my post has the disappeared user name

Congratulations from me as well Tom!