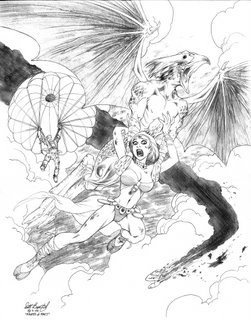 Here's another drawing I did this weekend for the "Pirates of Venus" project. It's a scene towards the end of the film where Princess Duare is rescued from certain ouchies by a Klangan warrior/bird/man/thingy. Carson Napier, the hero, bails out of a fighter with a parachute.

I also tried the "idea generator" from the previous post. I did about 20, here are the best results:

- A lunatic sherpa receives a robot in space.
- An armed building site machine intertwines a child in a sauna.
- A rough journalist burns a bionic mammal on a meteorite base.
- An ethéreal monster hypnotizes a priest in an arena.
- A thundering vampire rocks a priest inbetween giant flowers.
- A flying minotaur cuts a woman with a hat in a bar.
- An abyssal troll hammers a blonde at the top of a mountain.
- A dusty prehistoric man observes a train in a factory.
- A legless african warrior runs towards a pirate in a temple.
- A noble squid informs a robot on top of a chasm.
- A buried ninja tears a child during a live performance.
Posted by MrGoodson2 at 3:50 PM

Atsa Nice. The eye is lead about in a most exciting and fun way. I think you guys are going to make a splash with this Carson Napier package. Just don't sell it to Harry Knowles. I edited you virtual walking poo copy. Did you notice?

I've made you break the unspoken rules twice! Dear, sweet Ellis, I've driven you to silent, closeted tears with my comments haven't I? My intention was to strengthen you. I figured it was time to toughen you up! I've neglected it for far too long. Besides, I thought you were able to field the barbs better than these other pansy-wastes. Jeff would collapses into congealed butter if I even raised my voice to him. I just... didn't think you were made of the same ilk. For that I apologize. It's Care Bears and Fruit Roll-ups for you from this moment on...
...A-hole.

Love the drawing. I musta missed something about the Carson of Venus project. Is it something you're pitching S.B.? Or is it a WIP for someone established (and we're getting to see the cool stuff just after your bosses ...).

Regardless, I'm better off for seeing it and reading yours and Ellis' goofy comments. Yah. Atsa nice! heh heh ...

I like the size of the heads on this one. Flying is always cool too. You still have to tell us why you're doing these. I ooze into congealed butter at the sight of your drawings!

I'm doing some pre-production illustration for the company I wrote my film for. They have liscenses to the Edgar Rice Burroughs' books, the "Pirates of Venus" being a serial he wrote in 1932 for Argosy Weekly. These drawings are keyframe art for pitches and the like.

By the way, does anyone know how to change my profile I.D. photo?

I know how to change your profile ID photo

OK, that's nice that you guys know HOW to change it, now would you mind telling me?

Um, if butter is congealed then it no longer "oozes".

I know how to change your avatar, too.

Scott, go to your profile and paste in this address...
http://www.ellisgoodson.com/resume_files/day1_scottbenefiel.gif
Once you start using it regularly I'll make myself a new one. Don't cry or anything. I want you to have a snappy ID like every one else

Holy crap that's funny!! I just spewed soy milk from my nostrils!!! (how the soy milk got there is another matter)

You HAVE to use that avatar Scott!