Because Ellis and Tom asked.

Comic book stores killed the comic book by closing off the product to new purchasers. 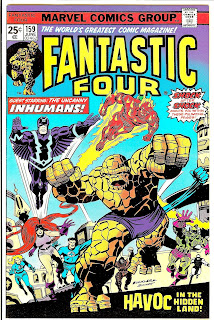 My first comic (pictured above), probably yours, and any number of collectors and professionals was given to me by a disinterested adult when I was home with cold. In New York we had stationery stores. These were like Hallmark stores that also sold calendars, office supplies, journals,and cigarettes. They had extensive candy counters and magazine racks. Everybody who needed a lighter, a birthday card, Playboy, or a stick of gum went into those stores. That's where my mom bought me my first comic book, next door to her beauty parlor, when I was home with a fever. She probably regrets that purchase to this day. Once I was hooked I was able to bicycle to the local stationery stores myself. I could go in and browse the revolving magazine stand of comics. Other kids were there for candy or baseball cards and grown-ups were getting pens or holiday cards or something. Comics were a quarter. Comics were cheap because they were supposed to be periodicals. They had the requisite editorial (Stan Lee's soapbox and bullpen page) and production costs were paid for by advertising. So the point is, an adult purchased one comic and started a sustainable habit that only needed a bicycle and tiny allowance. That is how a market was created in the 40s, 50s, 60s, and 70s.

Then came Heroes World. A comic specialty chain created by Marvel comics. The first step towards Marvel's eventual bankruptcy. Following Heroes World was the creation of the the independent comic book stores. Would anyone's mom walk into a comic book store? Remember the direct sales box replacing the bar code on the cover? As a collector you wanted the direct sales cover. The magazine rack comic sales at other stores declined and they had no incentive to keep supplying them. Because of direct sales, the advertising decreased in the magazines, and the costs went up to cover production. In no time at all comics were over a $1. Comics were becoming a specialty product in a highly segmented product. A 10-year-old could not get to a comic book shop. The stores also attracted the older collector. Little kids and moms were intimidated by the stores (comic book guy) and priced out of the product. No gum, no baseball cards, no new purchasers. Cigarettes were doing a better job attracting kids to their product than comic books were. Comics, instead of being something every boy had at one time (with quite a few of us continuing to buy), became nerd fodder for older kids. Then the number 1 frenzy, the multiple cover fiascoes, the metallic covers, X-Everything, etc., all to feed the direct market. The market continually skewed older with less replenishment. To keep that market the stories changed. Who and how they hired creatives changed. These things we still talk about. Does a modern 8-year-old even see a comic book besides an Archie at the grocery store. The movies sell coloring books in grocery and toy stores, but the comic book now comes later, needing to have an ironic charge so as not to be kid stuff. Sales have shifted to the $15 trade paperback, and ironically, they are sold in real book stores. The comic book stores are closing.

So that's why we lament the loss of the early silver age comic book charm and wonder at the skeeziness of the modern independents. It's Heroes World's fault.

I'll keep an eye on this site http://www.comichron.com/yearlycomicssales/1960s.html to see if they post data to support my argument.
Posted by MrGoodson2 at 8:35 PM

Very well reasoned. So I assume you cut and pasted it from somewhere.

No, I think you're right. The big kids took over and exactly what Tom was complaining about occurred- the writing for wonder and fantasy started to disappear.

Trade paperbacks is what we get in return. Pitches for movies a lot of the time.

Fascinating that Marvel could let their whole farm team of future product wither and die the way it has.

Thanks for the thoughts Ben. Very interesting take on how all the comic book events of the past 40 years are tied together. There's much to what you say. If those things were the cause, does it suggest a solution to the problem? Could the type of comics-for-kids we all miss be resurrected somehow? I will have to ponder it a bit. Thought-provoking...

I just finished the 4 issue run of Congo Bill. I bought it with the mistaken idea it was an all Corben art project. I liked the guy that did the interior art, but he's no Corben. And finally, I learned the fantasy of a man trading his brain with a gorilla via magic ring astral projection was about .01 percent of the story. It was mainly a liberal white guilt puke out of a story about exploiting Africa by corporate interests. I was honestly angry after reading it. I wasn't upset with political disagreement. I was upset that someone made a lefty comic book built on top of a favorite childhood fantasy.
I can't find a picture of Scott Cunningham on the internet. I always like to see pictures of people that have committed crimes. He happens to share the same name as an author that wrote wicca witchcraft books. Wicca wins on the internet.

There was a panel on kids and comics at the Fest two years ago. The panelists were going on about kids comics, but couldn't see that selling the Simpsons Comics in a comic book store was being ironic, not kid friendly. I asked Scott Shaw!, on the panel, about Archie Comics being on the check out line in supermarkets, like where kids are, and he went off on how rotten Archie is, was, and will always be to creatives, so he did not address the supermarket marketing thing.

Love this post, Ben. As Tom said, very thoughtful and thought-provoking. I wonder if, more than the method of delivery, is today's problem with comics-n-kids more about the crowded marketplace where comics have to compete for a kid's attention? Back long ago we only got a few hours of specialty cartoons on Saturday morning...now they have entire networks--not to mention videos of mighty movies and of course the internets....

My 2 cents: I don't think the downfall was the retail outlets but the audience that the companies decided to cater to. When comics are written for the 50 year old collector rather than for kids it's just natural that kids aren't going to be interested in the product. I think Marty is right as well... there's just a lot of other things (video games) for kids to do with their time. And comics are just too expensive... for kids and grown ups.