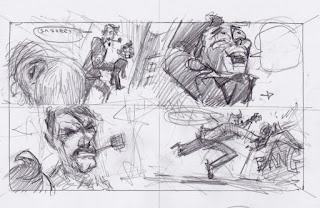 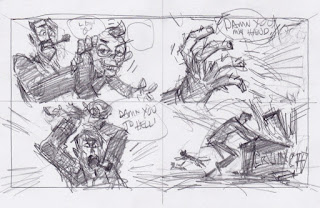 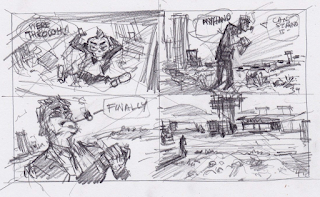 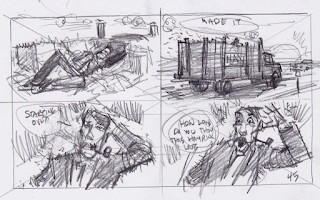 Makes me eager to find out what the plot is. He goes from smashing his dummy to a hayride... intriguing. What can it mean?

Once I get the thumbnails all done I move to the formatting into photoshop stage. I also want to get the Dreamworks stage dabbled into place. Where the hyperlink- panel advancing part of the web comic will occur. I should probably do that with placeholder art so that it is all ready for the art.

I want there to be a couple of spots for ads. Not so much for the revenue but for the motivation to come up with new content. I have some sort of block about working for free. Just making a pittance of money makes it 'real' for me.

For a web production, is there a set panel/page count?

Ben. Not the way I'll do it. I'll be building the thing where one panel is viewed at a time. And you button advance through the story. Like a slide show.

What is good about this thumbnail process. I 've discovered I can live with 8 equal frames for a single page of comics. That will be how I do the Gorgon contribution. Might seem small but the finished art is going to be all about easy to read.

Okay then. Is the number of pages up to you?

The script weighs in at 93 frames. Maybe 94. Approximately. It would be about 12 pages going 8 frames to a page. Just right. Maybe have extra column space to direct people to the web comic experience.

Sorry--all the myriad outlets for communication have my head spinning--I've got four different web interfaces for my school stuff and keeping up with that is seriously disorienting me, and--most unforgivably--taking me away from doings here on the classic TAG Blog.

This is looking so good. I love the evil Howdy-Doody-ness of yr dummy. The Hestonian "Damn you to hell!!" The dummy showing up when you think he's escaped with the off-screen voice--all super great story-telling!

When I first read thru, I was confused on frame one that he was saying "I'm sorry" to the dummy, not the dead girl...on panel 2 of page 2 "Damn you! My Hand!" wonder if "My hand!" is unnecessary...? If not, maybe he'd say them in inverted order "My hand(surprise) Damn you (anger directed at source)"?

That is really the quibbliest of quibbles, so forgive me for even mentioning it.

And page 3 is such a dramatic event--the break up--that first fram is so goo--I wonder if the second frame could linger on the scene a little more...? Maybe a dramatic down shot from a wide over-the-shoulder position--show us the man as he looks down into the trashbin--just his (silhouetted?) figure looming over the "scene of the crime"--we don't even need to see the dummy. Panel 3 with it's dramatic closeup as you have it is great--maybe you could really push it and go in even tighter?? Show his desperation/relief/pain?? Love the long shot to finish the passage off. So classic!!

Love that you're doing it as a web comic. Super cool!

In the run up to Halloween, we caught a few minutes of the strange Michael Redgrave film where he is dominated by his malevolent, possibly independent dummy. It was too creepy and we had to change the channel!

I like that flip on "My hand. " "Damn You." Good idea. That's funny that you couldn't watch Dead of Night. It's probably the best of the evil ventriloquist dummy stories. It is creepy. I have to look it up. I think it was Amicus.

Thanks for all the notes and praise. I think it will play as a good champagne bottle smash on the hull of the Uncle Goggle Pitiless Eyes web comic.

That teaching is time consuming. I bet you dig it.