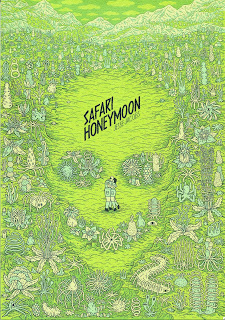 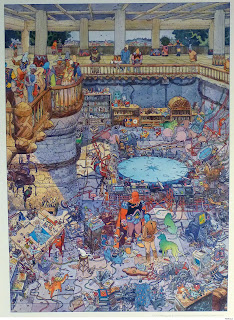 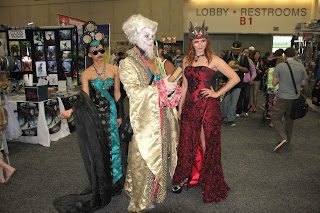 Not too much to report.  I didn't see that many really cool costumes. The costumes above were the best for the day.  I don't know who they are supposed to be though, anybody know? And I just threw in the Moebius pic for coolness sake. Kept my purchases down to a mere $50 or so.

Ran into Rob Cuenca and had a good chat.  He's looking for work since last February when the new company bought SOE. Haven't seen him for years even though we both worked at SOE but in separate buildings.  He told me he's in the process of re-making his art career, trying his hand at programming and considering other options outside games.   Later ran into Jeff Remmer too and talked with him a while. Nice to see them both.
Posted by MrGoodson2 at 5:52 PM

Man, that would be great to be in San Diego running into random people I know. I envy that about the Con experience more than anything.
I don't recognize your cosplayers. Probably some recent movie that almost cracked cult status.
Moebius illo is great.
The other guy reminds me of that Fantagraphics artist that does the weird format stories about the melancholy types.

Thanks for sharing Tom! Running into people, seeing friends, that's what I miss about SDCC as well. I can do without the crowds. Rob has always been sort of reclusive, but used to be quite a cosplayer himself, at least on Halloween.

I think that the cosplayers in the pic represent something they just made up, or it's some sort of mash-up... it's the Matrix and Harry Potter mashed together.

That artist's Tumblr has a vimeo item called GIF-JAM 2014. Not just him. Some really ingenious loops.

Chris Ware is who I mean. Thanks Rick.