Going to the Opera Next Week

San Diego Opera has been doing a cool thing for a while now--they open up their final dress rehearsal to artists interested in sketching the performers.  I happened to be stationed next to Scott Benefiel's table at San Diego Comics Fest when the Opera's media relations guy stopped by to invite Scott to participate. He said Eric Shannower had suggested our mighty Buncake. I of course butted in and said, "I wanna do it, too!"

The gentleman from the Opera couldn't fabricate an excuse fast enough to squelch me, so looks like next week I'll be heading down to the Civic Center to draw some singers and sets. This doodle was just a spontaneous manifestation of my excitement. 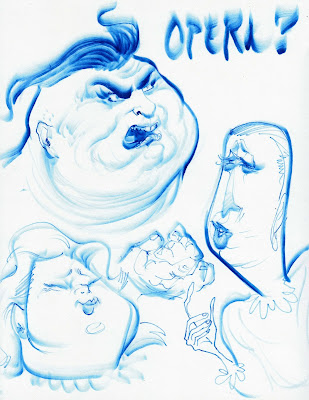 My favorite thing that Opera singers do is laugh operatically.

Great characters. They're in for some fun sketching.

I wonder if anyone has six pack abs in opera.

I didn't know the Opera did this!
That's really cool ... both the opportunity and your spontaneous manifestation. :D

I'm giggling at the easily imagined scene (which I missed) of you butting in at SDCF.

Glad you spoke up. They will be so happy that you did once they see your work!

Do you have to let them publish your sketches for publicity if they like them?

Glad you guys liked the sketches.

Tom, yes, the drawings will be ours to keep, but they ask that the Opera be able to post them/share them on social media. They are hoping to one day organize some sort of show...we'll see what happens there!

I bought a new 48 pack of Prismacolor Felt Tip Markers for the occasion. Got 'em at Michael's with a 40% off coupon. Still dang pricey....

If the results are any good I'll be sure to share them here.

My new Kong avatar should remind us all that Marty is the Ninth wonder of the world.