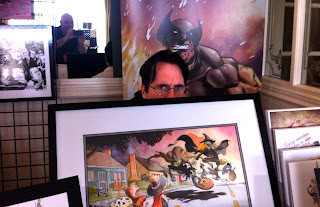 Scott Benefiel was there... 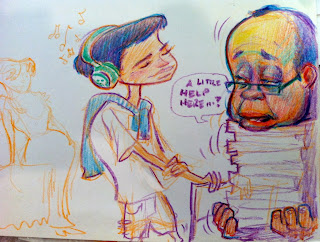 ...Jeff Ranjo showed up with son Jack, and brought a tall stack of his Eisner Award Nominated book, "Where is Dead Zero?" 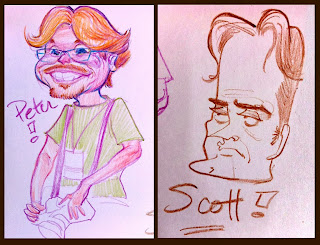 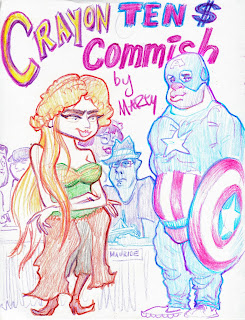 I set out my shingle offering up crayon "commish'es" for a small fee....Naturally, the first person I was "drawn" to record was the man opposite my table, Jim Gorham. The man now known as "Maurice" (say it "Morris!"). 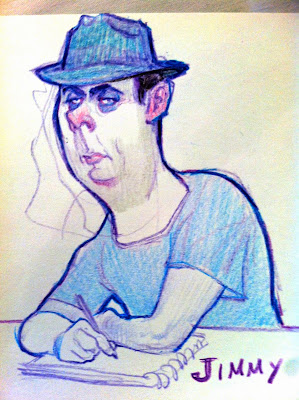 (Jimmy, I confess I finessed this a little...I saw the possibility to turn it into THE definitive Gorham portrait...I hope you approve.) 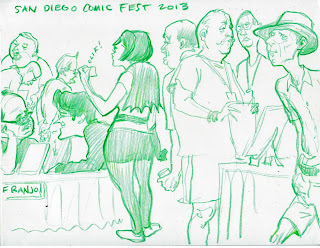 When the commissions failed to come cascading in (ahem), I started drawing the crowds. Notice the artist named "FRANJO" back there?

Saturday he brought along a bucket of candy to sweeten sales. Come Sunday he was handing out plastic vampire teeth. I drew this (rather fictional) scene, and got an earful for always depicting him in flip-flops. 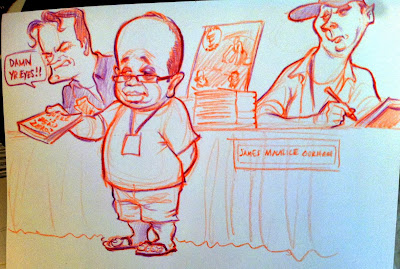 p.s. The crayons caught on about an hour before closing the Fest. I still have an unfulfilled commission for Lady Beata that needs to be done. Ellis was missed, as was Tom Carroll, and every other TAGster that didn't make it. And it has been decided next year a proper TAG dinner will be a must, with attendance mandatory. Make yr plane reservations NOW!
Posted by MrGoodson2 at 11:37 AM

The "Crayon Caricature Sniper" Marty Davis capping everybody in his field of fire with his 64 colors. No one was spared. LOL!

So, business wasn't so brisk, eh?

Love all these. Dig how you worked yourself into the photo of Scott. That guy makes me laugh. Great shot.

The caricatures were amazing. Really got the Gorham snoot figured out. And the flip flops just seem right don't they? I like the Background Beata you have in there. I've seem the FB photos so I can tell other personalities that you also nailed.

Better than photos. This is enhanced memories.

Glad you guys got a kick out of 'em. The crayon looks a little too much like run-o-the-mill Prismacolor pencil work in reproduction. Half the charm comes from their waxy presence.

The weekend pointed out the necessity of bringing the whole T.A.G. group to a single 'Con. I vote for E.C.C.C. I stayed with Tom Moon for the duration of Comic Fest, and I was pressuring him mightily to join in on a group booth once his Raymond and Robot saga is published (heck, his wife and I tried to convince him he'd do great with posters alone).

Funny to think how much your crayon commissions might appreciate.

I have beds to spare for folks coming to ECCC! It's a great con! come check it out!

And if he wants it pronounced "Morris" spell it that way. Until then it's....Mawreese.

don't need NO peanut comments from the Okie Gallery. LOL

Maurice Herbert Evans (3 June 1901 – 12 March 1989) was an English actor noted for his interpretations of Shakespearean characters. In terms of his screen roles, he is probably best known as Dr. Zaius in Planet of the Apes and as Samantha Stephens' father Maurice in Bewitched.

American television audiences of the 1960s will remember Evans as Samantha's father, Maurice, on the sitcom Bewitched. His real-life insistence that his first name was pronounced the same as the name "Morris" was ironically at odds with his Bewitched character's contrasting stance that it be pronounced "Maw-REESE".


Maurice Ernest Gibb, CBE (/ˈmɔrɪs/, 22 December 1949 – 12 January 2003) was an English [5] musician, singer and songwriter. He was born in the Isle of Man to English parents, the twin brother of Robin Gibb and younger brother to Barry, best known as a member of the singing and songwriting trio the Bee Gees.

Hey, it's Tuesday. Too much Marty posted already, but I'm counting on seeing some art goodness from my T.A.G. brethren...

I'll have something shortly. The Inktober for tomorrow.