Think anyone could actually watch all these?

128! episodes times 5 , 5 minute cartoons per episode... that's ...a whole lotta crap. - The Mighty Hercules Hercules, hero of song and story. Hercules, winner of ancient glory. Fighting for the right, Fighting with his might, With the strength of ten, ordinary men. Hercules, people are safe when near him. Hercules, only the evil fear him. Softness in his eyes, Iron in his thighs, Virtue in his heart, Fire in every part, Of the Mighty Hercules. Join us at his side, Standing there with pride, Victory is here, Raise a mighty cheer, At the sight of Hercules. 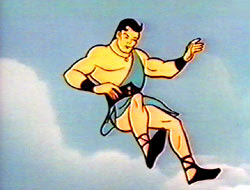 OLYMPIA! I watched the first half hour show. Hilariously bad. I imagine the laughs start to dry up after about 3 programs of 4 or 5 bad cartoons apiece.
Posted by MrGoodson2 at 10:44 AM

Did you watch them on Netflix? I watched some, and the show's are missing the good theme song sung by Johnny Nash that you refer to. From reading the reviewer's comments I gather that the cartoons were re-dubbed at some point, so they are incredibly lame now. (Not that they were masterpieces before, but I have good childhood memories of them).

Also the cartoons on YouTube have the original voice actors which were much better:
http://www.youtube.com/watch?v=pxAvtVhmI7Y

I think you're right. That is different than the netflix streaming song. I'll have to check. I like the youtube better.

I've got the commercial DVD. It's all original. One of the earliest memories I have of a cartoon was this show and Stingray. I like it.

and the Sam Singer Sinbad Jr.

Grim Natwick supposedly worked on it. It wasn't so much bad as it was as limited as limited animation gets. And just "get it done" story sketch outs.

Watched another program last night. The cartoons show talented artists at work. Very much in the style of the anime that came later. But they have no handle on being funny. It falls on it's face hardest when it tries humour. And they don't have that original theme. A real shame.

Ellis, I think this is your cue to do your rendition of these characters from the show, Hercules, Helena, Daedelus and Newton!

Sure, he can do that right after he SENDS ME SOME ART FOR THE TAG ART BOOK.

I thought I missed the deadline on the TAG book. I'll do something tonight.

I just watched the one you linked to Tom. The acting is better. Definitely more likely to get a laugh with the centaur character with the original voice.
The original song was better for the choice of images as well. I like the big "H" backdrop for the small figure Herc. Someone art directed that Herc shouldn't be that small and missed that cool scale moment.
Makes you resent the term "restored."