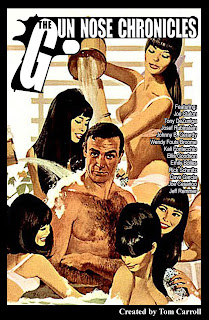 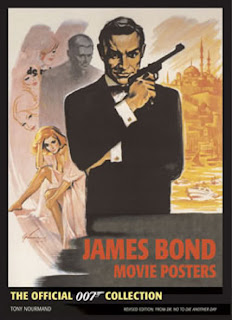 I agree with all of Ellis's suggestions, and I think the cover is nicely done, but I would be in favor of a fuller, more dynamic compostition. The shapes on the page don't really activate the space; it's very static. The small female figures make the composition kind of "spotty" and broken up. It would be more interesting to see them interact with the main figure.
I googled the reference picture of Bond that the artist used and found some other Bond posters from that era. I'd like to see something more like this poster used as a basis for the parody. The central figure could still be holding the gun; he could even be wearing his tuxedo in the tub.
Hope I'm not suggesting too radical a change for the artist. It means starting over from scratch, (sorry, to whoever the artist is). What do you think?
The picture I just added (second one down) is an example of retaining the "collage" effect but with the background and compositional shapes used well. I like the slightly stylized cut of Bond's jacket that gives the shape "oomph" and definition. Look and the nice negative space around the figure as it relates to the border. And that negative space is filled with dynamic shapes as well. 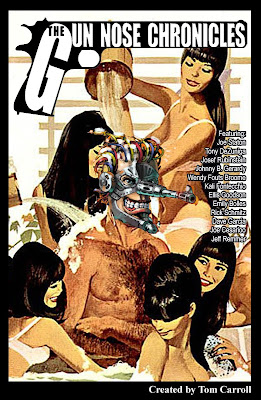 What I should have done, for the sake of "pop", is soap -white all around the pasted in head. Notice that I couldn't leave Connery's neck alone and had to switch the muscle going to the clavicle.

But of course I don't necessarily mean this poster layout should be copied exactly. An alternative would be to cut out the main figure that already exists and drop in a new background with Photoshop; a background that had larger female figures. They wouldn't have to necessarily overlap the main figure, but they could be looking at Gun Nose admiringly. (Or maybe just a hand or fingertips could overlap his arms or shoulders.) So it would be extra work, but the artist wouldn't be starting over.

The main point is that the double circles and the small figures don't fill the space well, in my opinion.

I saw a James Bond psoter book at Nucleus at Jeff's art show. It also included all the Bond syndicated strips. Might be the same book. Good looking designs. Not sure if that one is McGinnis

Yeah. The signature isn't McGinnis, the figures aren't elongated enough and he gets it wrong on making eyebrows and such black on the dropped out figures. That's jarring and something McGinnis would never do.

Count on Ellis to know the illustrator by name. I went to Amazon and searched for McGinnis. I was tempted to order one of the used copies of his art.

titles I captured and put on youtube. Check out the other one link on the youtube page called "Why'd we fire that Gun"

I think Bond among a gaggle of girls bathing him is pretty funny. I totally agree concerning the composition issue.

This is a fantastic book on the subject of 60's illustrations like the Bond posters...

It's all about reducing the rendering, dynamic poses and making fantastic compositions... and really big eyelashes. I highly recommend it.

Looks like a great book. I only wish Amazon let me look inside. (Oh wait, there's a bunch of scrollable thumbnails you can click on here.) It does look good. I'll have to keep an eye out for it, maybe at the next Con. Do you own a copy Rick?

We've started an art library at work to share books like this and ones that are specific to projects we are working on. This book is in that library and would say its quite nice and inspirational. Great color, composition and figure work.