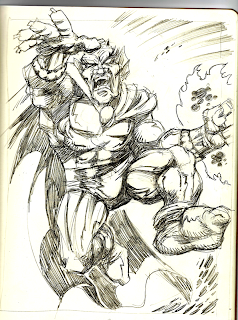 Yup, I actually still draw from time to time.  Not too much for work, but I draw my little cartoons, Nearsighted Comics, and after reading a compilation of Kirby Demon comics that I checked out from the library, I was inspired to do this drawing.  I know that the little Kirby dashes are just sort of tacked on, bu I still like them.

I never read these comics when they were originally published, but I was reading other "weird adventure" from the time... Werewolf by Night, House of Secrets, Ghosts, Plop, The Witching Hour, etc.

The Demon himself had some little ruffles at the ends of his sleeves and a raggedy edge to the cape in the first issue.  After that first appearance those element pretty much disappeared, so I have recreated him in the manner in which he typically appeared.

Kirby was a terrific yarn teller... he not only created the Demon, but had a whole back story (he's the loyal servant of Merlin) friends to save and to save him, and some outrageous villains.  Who else but Kirby would have the audacity to name a villain Count Von Evilstien?
Posted by MrGoodson2 at 5:52 PM

Awesome work Rick. I think you've got more than just tacked on Kirby in that. It's got the energy.

Love it--I like how you've got the stoutness of the Demon in there--he always looked just a couple steps away from a Beast sort of body.

I was never interested in Mr. Miracle from the whole Fourth World saga, but then I read those comics and I now believe Scott Free (Mr. Miracle) and Big Barda represent the last true romantic couple--and maybe the best ever in comics (forget Mary Jane and Peter Parker--that stuff's kid's stuff!).

Maybe it's just because Scott used to shave his head?