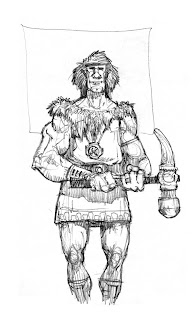 Title is a link to tons of art.

I almost got a job on PS magazine when I first came to San Diego 25 years ago. Jeff Jonas and Steve High had just vacated positions on the magazine. They needed someone that could ape that awesome Eisner look. If you know Steve High's art, he was the best.

Anyway., this is a treasure trove of things that Eisner probably had at least as much enthusiasm for as The Spirit.

I got the link from facebook friend Terry Beatty. He works for the magazine Scary Monsters and also did the Ms Tree's comic I provided with the Scythe back up feature (provided badly)

I added a Viking or Roman BBQ chef to the top. I didn't want to bump the Walt cartoon.
Posted by MrGoodson2 at 8:13 AM

Memories: Inking for P.S. magazine was my first job when I moved down to San Diego. While working with Steve and Jeff, I actually got to do a cover, but it was not in the style of Eisner. I think they let me do it because it basically involved tracing a photograph that the client had picked out. That was also to be my last art job for a while. Discouraged by the fact that we had to fight for a ten or fifteen-cent-an-hour pay raise, I said, "Heck with this," and signed up at Coleman College to learn to be a computer programmer.

That's cool that we were on a similar path Tom. I think we talked about and I forgot about it.
I may actually remember the guy that interviewed me. Yberra?
I imagine you could find an issue that has your work.

I think I might have interviewed with those guys when I first got to SD... I remember going on an interview with a couple of guys making military comics. It looked like fun.

I remember Richard Ybarra. He was hired shortly before I left. I looked at the PS web site but they only seem to have the Eisner issues, which go to 1971, before my time in 1982.