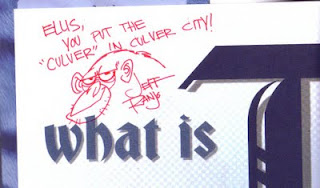 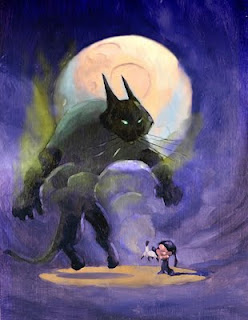 You've got quite a touch with a Chimp Jeff. All the stories were great ( well, maybe not all). The one I read last was the Sherlock Holmes-like story because it had so much text. I ended up liking it a lot.

Why does Byron Howard look so much like Chris Sanders? Who influenced who?

Anyway, great book. Wish I had the first one...Rocket Johnson?

I made the title a link to the animatic I made of the characters depicted in the digitally modified oil painting shown. It's not Torch Tiger related.

Also added a scan of the Ranjo Denny's autograph
Posted by MrGoodson2 at 10:02 PM

Labels: What Is Torch Tiger?

Is the illustration something from Torch Tiger or something you did Ellis?

It's something I did and I think I've posted before. I've justified re posting it with a hue saturation layer added to give it some hot torch fx.

It's from this idea of mine I didn't pursue...
http://weirdellis.com/flash/images/TogandTy.html

Speaking of pursuit. I'm closing in on getting my script finished for another spoken word pass that I'll post on youtube. look for that soon.

Beata. They zapped my plaspastic acct. Now its plazpastic. I only have one video. One where I bitch about g4 being the death of my old account.

Ellis, I am so confused by your last response that I'm not even sure it is the REAL Ellis--maybe it's one of those spam-mailing, filter-evading, text-butchering software programs being run by someone working from home, hoping to make $5,000 a month ("--maybe even $20,000 a month--from home !")...y'know?

Is it me or does the monster cat come from what looks like a normal household cat being pressed bong-like to the lips off a pig-tailed child? Is that just me?

Marty.It's really me. Beata wonders where my old youtube account went. I was explaining, not to lucidly, that G4 network had youtube shut down my account. It was 3 strikes you're out. I had Olivia Munn's cliff dive, Kevin Perrera landing on his face accidentally in a stunt gone wrong, and a clip from Ninja Warrior.
And my own demo reel had music from Team America (Montage) but they just disabled that.

Anyway, from about 140 clips to just one now.

And the new Icon is just a sympton of needing a new google identity to enable rebuilding my youtube account.

Did that make sense?

I certify that MrGoodson2 is the original Ellis as well. Only older