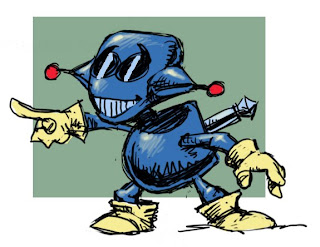 Ellis says for me to post, so I'm posting. This is a little concept for a little game that was never made.

As far as unpacking is concerned the printer/scanner is unpacked, but it's so awful that I don't want to use it. We have a much better scanner at the office, but it's not currently hooked up to the network. I may just break down and use the crummy one at home.

In other news, I had lunch with Mike Christian yesterday. It turns out he works just a few blocks away from my office. He looks to be doing well and he's in fine spirits. It was very cool to hang out with him... perhaps he will read this and be inspired to post something... hint, hint.
Posted by MrGoodson2 at 7:56 AM

You, Mike, Ronnie. Quite a contigent up there.

I like Lil Dude.. Good to see some Schmitz on the Blog again.

I had a nice visit with Joe Shoopack a week ago as well... he was up to check in on SOE North and just by coincidence the Seahawks were playing his beloved Eagles....

He sure is a cute lil' dude, but what is that thing in his back?