Week Four of COMIX with MARD

Comics Week 4 passed without incident. Everyone (for the most part) turned in their Project One "Hero + Animal" assignment--some were really great! Overall I was very impressed by the effort and the output. Teacher must be doing something right....
I lined out our next multi-week project, which is creating a mini-comic. Here's the assignment:
PROJECT 2:
The Mini-Comic
a story in 8 (tiny) pages
Create an 8 page mini-comic of BIOGRAPHIC CONTENT; it can be directly about you, your friends/family, about something you’ve witnessed, or something you are interested in--but it must come from YOU and YOUR OWN LIFE EXPERIENCE. You will print and bind enough copies for the entire class.
DUE OCTOBER 7th!!
And we looked at some mini-comix. I brought in what looked like a huge stack from my own collection (by that I mean, my whole collection) and let everyone handle them. I tried to sell the virtue of creating a physical thang. As the famous Jefferson J. Ranjo wrote in our comments, "JESH." 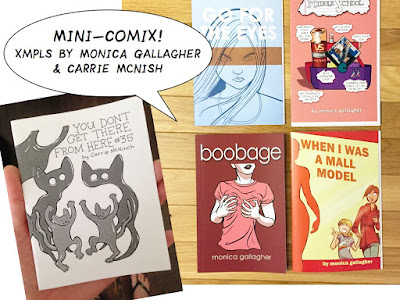 ON STORY n' STUFF:
I looked at Scott McCloud's "Making Comix" book, in particular we discussed the 5 Basic Choices in Deciding How to Tell Your Story (pages 8-53)
1. Choice of MOMENT(when is it happening?)
2. Choice of FRAME (what are you showing--and NOT showing?)
3. Choice of IMAGE (who or what is revealed?)
4. Choice of WORD (what are you saying--in type?)
5. Choice of FLOW (how are you arranging it all?)
See: five.

I attempted to introduce a little more on story structure by grappling with McKee's scene/story values/story event formulation...it was ruff!
Here's what I culled and rephrased (from "STORY" by Robert McKee):
A "STORY EVENT" is about creating meaningful change (in your characters, in your world, in your story). But...what kind of change are we talking about? Significant change. Significant? Like, if someone comes and tears down the protagonist's house? That may be a big "change" in the protag's world (he clearly won't be sleeping where he has been for awhile), but it's not necessarily a change that's significant in a story sense. Maybe the protag planned the demolition himself, and has already made new sleeping/living arrangements, so all this will have minimal impact on his life, etc.).
So how can we tell if the change is "significant" in the story sense?
This change must be expressed in something McKee (awkwardly, confusingly) calls "STORY VALUES."
STORY VALUES are values in opposition:
Love/Hate
Life/Death
Attraction/Repulsion
Loyalty/Betrayal
They can also include (but are not limited to) moral values:
Good/Evil
Or ethical:
Honest/Dishonest
To make a change significant, you must switch the "charge" in a story value to its opposite.

Huh? (that was my Ben-like reaction the first few times thru....)

To go back to the house example, the demolition as described above may be a non-event in story terms (because it doesn't impact the protag's story value disposition in any significant way); but what if he's been in a protracted legal battle with the city over land use rights? And now they've retaliated by bulldozing his pad? Story values for the hero change from sheltered to homeless (in simpler terms it's just the switch from secure to insecure). Flip the story around and say our hero's been fighting with the city for years to gain the right to demolish his house--in this case the bulldozers signify the opposite, a switch for the hero's story values from frustrated to triumphant, or from victim of the city's red tape to victor.
Don't think of these story values in terms of moral values--think of them in terms of an electrical charge (positive/negative) that can be "switched" to its opposite charge at any time.
So--how do you change a story value...?
Through CONFLICT.*
This conflict plays out in units known as scenes. The “SCENE” is an action through conflict (in more or less continuous time/space) that switches the value-charge of the character’s life on at least ONE value.
Ideally, every scene is a STORY EVENT. In the house demolition example, the actual scene of the bulldozers arriving may not be an actual story event--the conflict may have resolved before that--in the city controller's office, on the front pages of the local newspaper, or even curbside when the demolition team has the hero arrested so they can go about their business.
* Mike Dietz and I agree this term "conflict" is problematic: it sets me up to imagine action, initiative, a physical manifestation. Mike liked my earlier use of the term "disruption," especially for stories as small as ours here. Tho' disruption isn't perfect either, is it? How about "conflict/disruption"?
I don't know if I have the stomach to go too much deeper into this film structure stuff in future weeks...I'm debating it now....

I used this discussion of SCENE and STORY VALUES as a segue to storyboarding....
First I talked a wee bit about the framing in storyboarding...mainly about camera positioning. Only in the vaguest way. Then I gave them an in-class assignment to create a storyboard sequence of CONFLICT using this wonderful Dean Cornwell painting as the center of the sequence. 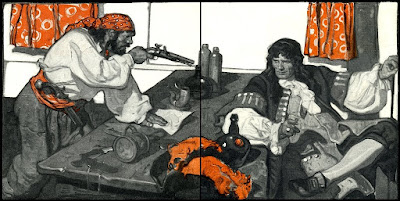 The idea is to build a five or six shot continuity of conflict between these two characters. This illustration should fall somewhere in the middle of the "scene"--and we mean scene in the McKee "STORY" sense of it--so this shot is happening halfway between having some significant story value switched for (at least) one of these characters. I said just a rough continuity--how do we get to this moment of confrontation, how do we get out. No dialogue (unless you wanted to). I gave 'em a little more than an hour.

We had mixed results.
But that's part of the learning process--as Tom Moon sez (which Blogger's new autocorrect tried to rewrite "Tom Moon sex")"It's hard to draw under all that time pressure!"
(Tom, that's the point--I'm trying to get them to speed up and use their drawings not as a final piece of beautiful perfect art, but as a tool for quick communication..."thinking with a pencil" as it's been called).
ONE OTHER STORY NOTION: Mike Dietz sat down with me after class finished for some pizza and story talk--and he immediately contributed a great concept. "The Promise of the Premise." Basically, if you set out a premise, you have to follow thru on its implications. McKee talks about this but I haven't yet read this phrase "Promise of the Premise" in his book...Mike sez he read it somewhere else, wouldn't take credit for it himself. But McKee does have a simple example--a film called "Mike's Murder" with Debra Winger...quite a good "maturation" plot, but NOT a murder mystery. The title threw people off, and the movie sunk at the box office for confusion and misdirection. Mostly this Promise/Premise equation is about what happens inside the story, but this simple title error explains it nicely, I think. The other famous example is Chekov's playwriting maxim, "If you introduce a gun in the first act, it had better go off before the end of the third act"(I'm paraphrasing badly).

I will ask for permission to share some of the animal comics people made for Project 1.

I switch to 'no style' on Firefox prefs when I read your big entries. That way I can read black text on white.
How amazing to add Mike Dietz to the brain trust of your class. That guy has done a lot of teaching in his life.
The course sounds like a lot of challenging fun. And a great thing for yourself of course. Chewing at all these story thoughts. Can't be anything but good.

Those mini comic examples look very interesting. I'm such a dope. I missed going to a zine fest recently that probably had a lot of good mini comics.

So... much... content...
I'm afraid I never contemplated structure so much. I have to read the McKee book. It seems like a requirement to participate in this blog.

As does drawing, which I will get to some day.