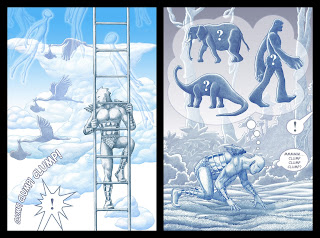 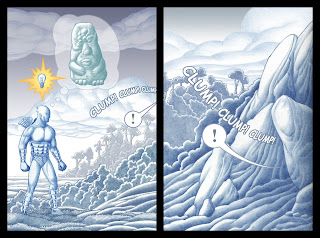 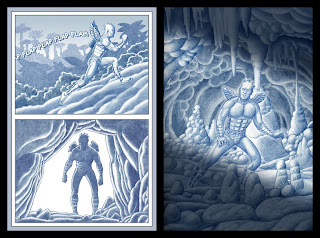 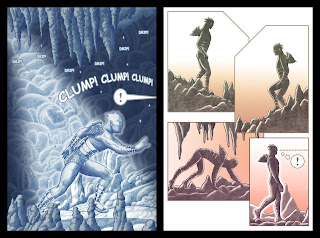 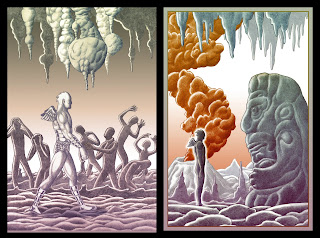 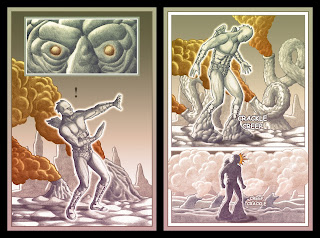 I love the subtle color change and the 'acting' in spot on. Your best work yet, Tom!
Oh, and I love the ladder.

Thanks Rick. Funny, regarding the characters "acting", I've always favored a sort of deadpan approach with the occasional scowl, which makes me imagine that they have all attended the "Clint Eastwood School of Acting".

That's what i liked about the Collector (I called him The Explorer earlier) . Like I alluded, Herbie Popnecker attitude. Just flowing with it. I've noticed the deadpan acting. My favorite page is the close up of the evil idol Boring his look at Raymond.

The acting has much more to do with your character's body language than anything else. The poses seem to be very carefully planned and read immediately... I find myself rushing through the story because it's so effortlessly legible... a pretty great achievement.

Same here Rick. Effortlessly legible is a great way to put it.

Thanks for that feedback! One thing I've noticed in many modern comics is that though the overall draftsmanship may be remarkable, the readability is low because the artist has put all these tricky points of view in. Also the panel layout is often artistically irregular, plus there can be a tremendous amount of detail. Cool to look at in a pure aesthetics way, but tough to digest quickly.

I blame that on the influence of movies on the comics medium. It works in movies because they can utilize tools like music, movement and spoken dialogue to help keep the audience's minds focused correctly.

I prefer to stylize things in a kind of "frontal stage" way so your brain doesn't tire out from constantly re-orienting itself while reading.

Actually I love Wes Anderson, and I was studying "The Grand Budapest Hotel" a while back noting that he and I had a lot in common in our general approach to art and entertainment.

Tommy Moon does it again.

I'm LOFFING ITK, just as any sentient being would. Clarity of staging and story (at least in the sense of one panel begetting the next, if not nec'ly in making your characters' motives and movements transparent) suits and even reinforces your mythic mode. Not just good yarn-spinning but something so specifically comic-book-y about the whole enterprise. Certain to be adored by comix connoisseurs the world over.

p.s. I still wish you'd drop that gawd-awful computer-warped text. Esp'ly for the clump clump sound fx....YOU ARE BETTER THAN THAT TOM MOON!!!

p.p.s. a million "thank you's" from your devoted public for ding more work and sharing it. Seriously.

Thanks Marty! It's funny that our respective brains see fonts so differently. For me the computer font represents the ultimate in readability, whereas the minor irregularities in a hand-lettered font create a kind of friction, a drag, on the reading flow. Such visual friction has it's uses, such as in the hand-lettered schedule that Raymond is holding. Other than that, reading hand-lettered stuff makes my brain work just a tiiii-ny bit harder, like walking over a rocky surface, which builds up over time and encourages me to stop reading.

Since there is an air of detatchment to the whole thing, the type and its mechanical manipulation don't appear in error to me. Flap flap flap and clump clump clump seem like a nod to convention more than story telling elements. I do think the feel of the story stumbles on the right side of three of six. The hero's "Lois is in trouble" face and stance are an over reaction from the hero considering what we've seen so far.

Thanks for that feedback Ben. I like hearing little tidbits of exactly how a reader's brain is reacting to anything and everything in the story. That air of humorous detachment, that little gap in seriousness, is another thing I love about Wes Anderson films.

Uncomfortable with diasagreeing with Marty, I looked at the title pages of the previous entry. The treatment of Raymond Fantasia brings to mind a coloring book, which I am sure was deliberate. The layout, format, and pacing are comparable to a coloring book adaptation of a Marvel movie. But the subject matter, treatment, and detail are so beyond that. This, without being parody. Subversive.

The difference between Marty's work and mine, overall, is summed up in our feelings about the font. The feel of Marty's work is very "warm", very human, open and friendly, just like Marty himself. His brush strokes are spontaneous and free, while my work feels labored (but I've learned that this is me and just go with it).

You should see him at his Con table, always very ready to engage passersby in conversation. Rick is very much the same way. Marty and Rick are like Italians. I'm more British.

As clear reading as it might be, I just noticed that The Collector is fated to be changed into an infant from re reading the very first page. Now that's foreshadowing.

These comments are all great to read--and thank you Tom for your kind words regarding my (completely insincere) "warmth" (I'm really a misanthrope), but YOU ARE ALL WRONG ABOUT THAT COMPUTER FONT!

That doesn't make me love you any less.

I was saying "I'm loving it!" but in my Russian babushka accent...think Ava Gabor!