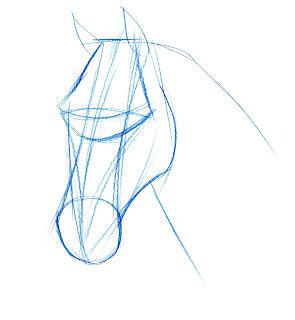 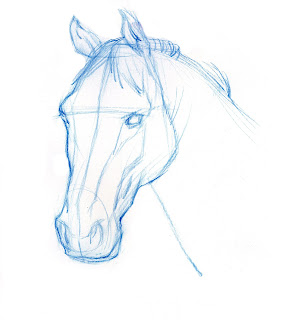 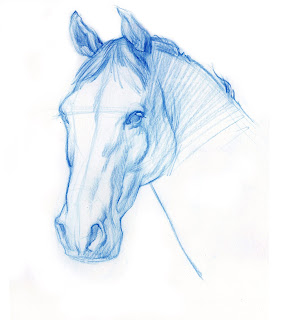 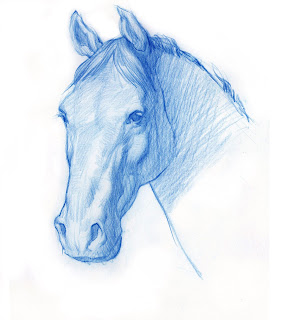 Working on this animal drawing class. So dang far behind. This is to give 'em an idea of how to build a drawing. A true step-by-step scan (except the abstraction), but turned out stiff-as-hell in the end, didn't it? Crap. Shouldn't work in blue pencil, either....

Jim Gorham, hope you're OK. Neither me nor Ranjo have been able to reach you by phone. I guess I should email. And I will. Soon as I finish prepping this class.

Ellis, I was thinking of your "You Rang" last night as I watched the obscure Warren Oates opus "Chandler." I taped it 'cuz: (1)Warren Oates and (2) I was thinking of "Hammet" (?) The Frederick Forrest movie from Zoetrope. The opening shot of Chandler was great, but oh, man, what a bad movie. Beautifully shot. And a gloriously mature Leslie Caron hustled about while wearing full-on 70's regalia of a rare gorgeousness.
My version of this internet meme:

BTW, this horse is my answer to my all-time favorite internet meme (which I showed the students on the first day of class as I inveighed against 90% of the "How to Draw Animals" books out there): 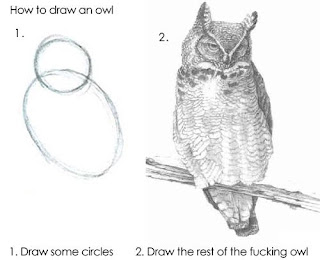 This is a class I'm glad you are sharing around. Funny commentary on how-to-draw diagrams.

I need to watch that Hammet. I have it in my Netflix queue but the first time I tried, it didn't hook me. Warren Oates does sound good. Playing Raymond Chandler. Never heard of it. It's not on Netflix streaming. Lets try youtube. Nope. Some clips. Found this instead Warren Oates - Across The Border

Cool to animate the drawing. It would make a nice gif with fade ins.

Are you kidding? The horse head came out beautifully!

How advanced are your students? Do they already draw the human figure well and it's just a matter of teaching them comparative anatomy?

Wish I could hear your lectures! Are you recording them for posting on YouTube later?

Tommy! thank you for the kind words.

It's interesting--I really like all the students, and I absolutely think they're all serious. As an example, I assigned a not-inconsiderable amount of homework, and every single kid did it--and did it completely, even "studiously" you might say. I didn't know what level to expect--this is for their animation program (a full four year degree), and basically everyone is a senior....so, I had kinda high expectations. They've all taken a bit of life drawing, (a pre-req for my class), but...I think for the most part they are all still just getting started with this life drawing stuff. Fer instance, based on the drawing samples I got in week one, I spent this second class going over a lot of the fundamentals that I was taught and that have stood me in good stead with all sorts of drawing situations....they seem real receptive, and I think the stuff is taking root. And I'm already seeing improvement.

It's been a real reminder of how becoming proficient at drawing just takes a lot of time. Practice and mindfulness. I preach this in class--work on the fundamentals, be patient, do the work.

(no, but seriously, I've been relieved/gratified to see that since setting down my teaching baton in 2005 I've managed to get better at this drawing thing. Much more comfortable doing drawing demos. File under, old dog new tricks, hope springs eternal, etc.....)

Teaching is the biggest of challenges. i think you'll be great at it. You fall in love with the kids. And hope for good things for them. At the same time it's really sad to know full well the so-so talented have a hard road ahead.

Heh, maybe it's the TALENTED that have a hard road ahead. The less talented will give up early in life and go do something else. :)

It's funny--I don't see success (or failure) in terms of "talent" so much...maybe I'm more cynical, but looking at the "can-I-make-a-living-from-this-art-thang" question from a little distance (at least, further away than the individual level), seems like the question really depends on what folks are buying at any given moment in history. In 16th Century Italy, it was marble statues; in Depression era Burbank, it was drawings of a talking cartoon mouse. To my eye, making a living seems like less a question of "talent" than the ability to give the powers-that-be what they want at that moment. Which is often not based on talent, per se.

Now that I think of it, there's maybe two art types that succeed at making a living; the rare "idea" people who come up with a new look/concept/style that gains popularity (John K. with Ren n Stimpy, Friz with his Conan book covers, Kirby/Ditko with superheroes, later Frank Miller, Mignola, or Jim Lee/Todd MacFarlane (?) with their comics style, same with a Daniel Clowes or R. Crumb on the alternative front) these are the taste-makers, trend-setters. For the rest of us, success depends on the ability to adapt to the prevailing style(s), to find a way to contribute on that continuum; we do this as much by learning the latest visual "jargon" as displaying any innate "talent."

Fer instance, when I was "coming up," the style of life drawing then prevalent was very loosey-goosey, very "gestural", very much a series of rounded balls arranged in not-very-well-defined-3D-space. I gravitated toward a more structural style, and that got some attention when applying for jobs (Dana Christensen's, fer one)...and then I came across the "tonal" method of life drawing, with its specialized quick sketch style, and I got into that--tho' I never really became as proficient as someone like a Jeff Watts.

At first, there was a lot of resistance to this style in professional circles (these people made their living off the thought that "gestural" and rounded figures were good, after all). But then taste changed...and now you do an image search for "life drawing" or "quick sketch" and you see the tonal method has become the dominant style. It served me in good stead for many years--I'd show my life drawing done in that newer tonal style to people, and I'd get hired--not so much because I was truly different (like with a true trend-setter), but because I was in a wave of the "coming thing." The same way a programmer gets hired when he knows the latest computer language. My "talent" as a draftsman was still only middling, but more than any proof of talent, my work was showing potential employers I could adapt, and I could bring them some of the latest "adaptations" out there.

For some reason it sounds like you are actually agreeing with me Marty! :)

Talent only gets you so far, then it's market forces and popular taste that determines who's making money and who's not.

Tom, I do agree with you--in all things. Esp'ly snickering cynicism.

I've given a lot of thought to style as of late. I recall looking at comics in the 80s and you could tell the difference between the old guard and the new... the Johnny Romitas of the world looked old and dates compared to the John Byrnes. Now John Byrne looks dated compared to some of the really amazing illustrations I see in comics today. I worry quite a bit that my personal style has become dated and that's part of the reason that it's hard for guys my age to find work... the current popular style just isn't in my DNA. I think that's why sometimes I dig deep into my personal style with my Creeple stuff: It may be dated looking, but no one else is every going to do drawings that look just like my style.

I have had those exact thoughts Rick. Most illustration fields seem to have a single "now" style, (video games, comics, magazine illustration, movie posters, book covers). The one happy exception seems to be children's books. If you peruse the children's section in book stores, there seems to be no one single style, but rather hundreds of different ones. Maybe because young children as viewers don't get hung up on what's in style. They just want beautiful art that's not too scary or disturbing. If you can do that you're okay.

And unlike when I was working in games, I feel completely free in my personal work to let the "retro" elements play a part in my style.

... and your Creeple drawings are 100% Rick Schmitz, which is why they are so great!

Rick, you have so many strengths. Not having the fashionable look of the moment is greatly outweighed by the strengths.

Thanks guys! It's always great to hear the encouragement!