Or you could go to OAFCON 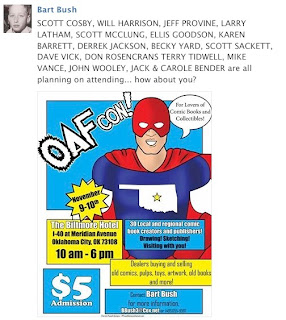 You need to do Bart's adverts.

How big is OafCon? How long has it been around?

Bart apparently starts a fresh blog for every year of OAFCON. Looked at this one and saw "FREDERIC WERTHAM actually was a member of OAF back in 1970. He received our fanzine and even used a full page for a OAF zine cover repro in his book on fanzines. I know he wouldnt approve of us collecting those horror and terror comics today, but we gotta salute him! SEDUCTION OF THE INNOCENT carries a lot of influence for later to come fandom and ranks as one of the core comic book reads!"

All you guys should surprise me, show up and buy a copy of The Bounty Of Zone Z from my half table spot.
I'll draw a free caricature of you as Captain Kirk.
Like you need an incentive to come to Oklahoma for a visit.

OK OK. I'll give you a copy of The Bounty Of Zone Z.

Yeah, Bart had the first comicbook store in Oklahoma (Norman, Ok) in the early 70's. OAF has been around a long time. I remember me and Henry going to their meetings starting in 76-77 at the Trade Winds motor Inn next to the Waffle House off of I40. Multi Con in 81 was the first BIG show I went to. He put that on too. Got that dickhead John Byrne to show up. What a bubble bursting encounter that was. I got to meet guys like Jim Aparo, Don Newton and Michael Golden (all cool)...and this local guy by the Name of Ellis Goodman, Goldstein....oh yeah Goodson. LOL!!! And I'll never forget Dick Giordano....another disappointment.

Byrne and Giordano, what were they like that they disappointed you? Unfriendly? Arrogant?

From what I hear John Byrne coined the terms unfriendly and arrogant ... though I never met him personally. I do have his initial run of Doomsday +1 on Charlton Comics, though.

John Byrne was a rude guy. It was like he couldn't be bothered with you. I was just out of High School that summer. He had a boatload of all those X-Men pages on this table. I was admiring a Wolverine snikt page. Unfortunately I didn't have the money back then or the vision to buy it. After I put it down, bastard nastily said to me "Few more minutes and I would have charged you rent". He was nasty to everybody. I heard they had to get him drunk at the night party before he chilled. Giordano was just mean. I was still in Jr. High and showed him some drawings and he said to me rudely for the most part "Kid, don't bother me with this stuff" then proceeded to ignore me. I've hated east coast people ever since. Guess being in hickville at a two bit hotel didn't impress some. I remember when I met Jim Aparo...I was scared to say anything too him at all thinking I'd get the a snide or nasty comment. But he was a real nice guy. Don Newton too. So I never said shit to the big namers anymore as they seem to have a chip. But I never forgot that.

Yeah, kind of figures with you.

Byrne is Canadian, although I don't know where he lives now. I've read that he doesn't like to do cons. I think he set a story at a con and the story ended with the whole city the con was in was destroyed. So I guess he REALLY doesn't like cons.
Ellis, take pictures of your con drawings before you hand them off!

Still, you can't be rude or nasty to your fans and admirers. If you do, you don't deserve to have the $$$$ and fame that goes with your success. Nasty people need to be hit by fast moving buses or trains anyway.

I love that not only is this gathering called "Oaf Con," but they've stuck with that name for over forty years!

I hate when small-bore "celebs" are a-holes. Never forget what a jerk Rob Schrab (sp?) was (is).

...and Jimmy, I like yr suggestion" Ellis SHOULD be doing these ads!

Apropos the advert's superhero pitchman: I like the ambiguous squiggle above his upper lip. Is it a lip line? Is it a stylish, Errol Flynn mustache? Is it an action line, and he's all a-quiver at the prospect of fronting OAFCON?